Stanley Meadows (1914-2009) or ‘Canon Stan’ is said to have been ‘a remarkable man, who did remarkable things, in remarkable times.’

Meadows came from a privileged background. His father, Henry Richardson Meadows, was an import merchant. Stanley was one of six children. Ironically his birth certificate was German; he was born in Riesisheim in Alsace on February 23 1914. His family also had a house on Lake Como; the young Stanley learned Italian on holidays there. Meadows was educated at Wellington School, Somerset, and then joined the Coldstream Guards. In 1936 he stood guard at the funeral of George V.

However, Meadows took the decision to leave the Army and prepare for ordination. To this end, he came to St David’s College Lampeter to study theology. However, his education was disrupted by the outbreak of the Second World War. He went back into the Army as a second lieutenant in the Lancashire Fusiliers. His first duty was to protect the Yorkshire coast from possible invasion at Sandsend, north of Whitby. In 1941 he was sent to North Africa; he served as an intelligence captain with the Eighth Army for the rest of the war in Europe. Indeed, he was one of the few people allowed to see the decoded intercepts of the enemy signals that came from Enigma at Bletchley Park. After the liberation of Rome in 1944, he spent several months in the eternal city.

On his return home, Meadows went back to Lampeter to pick up his studies again. Despite his upbringing, he chose to work in inner city areas, rather than in more affluent parishes. In 1948 he became a curate at St Mark’s Church, Worsley; he served a second curacy at Holy Trinity, Littleborough. His next post was as rector of St George’s Charlestown, Salford, from 1951 to 1961. After this, he moved to St George’s with St Barnabas at Miles Platting, in a densely populated, inner city area of Manchester. There Meadows oversaw the successful union of three parishes and the building of a new church, St Cuthbert’s. Alongside his other duties, Meadows was chaplain to the 45th Territorial Army Parachute Brigade, making a number of jumps himself. He was awarded the Territorial  Decoration in 1961. Meadows did not attempt to hide his views. On one occasion the bishop of Manchester asked him why the cross at St Cuthbert’s was offset. He replied, ‘It is like the Rector – slightly left of centre.’ 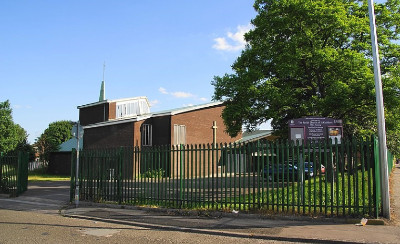 Meadows was made an honorary canon in 1971. He became Rural Dean of Ardwick six years later. He went on taking services after he had retired, as well as acting as a part time guide to Manchester Cathedral.

He was an enthusiastic climber and walker. In his youth, he was an instructor at the Plas Y Brenin Centre in Snowdonia. Later he was a member of the Rucksack Club; he was president of the Manchester Pedestrians Club in 1969.

He was married three times; his first union, to Violet Smith in 1940, ended in divorce after the war. His second marriage, to Edna Walker in 1982, ended with her death. In 1989 he married Ivy Harris; she lived until 2008. He was survived by a daughter from his first marriage.

Obituary of The Rev Canon Stanley Meadows Intelligence officer who saw the decoded Engima intercepts and later worked as a priest in Manchester. (2009, May 14). Daily Telegraph. Retrieved from https://infoweb.newsbank.com/resources/doc/nb/news/128CD0812E5A2E30?p=UKNB

Death of a very remarkable man. (2009, May 22). Manchester Evening News. Retrieved from https://www.manchestereveningnews.co.uk/news/local-news/death-of-a-very-remarkable-man-920270