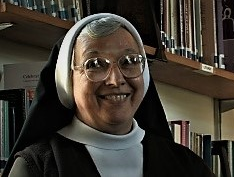 Patricia Rumsey is Mother Abbess of a small religious community; alongside this, she writes on liturgy and on early monasticism.

Rumsey was born in Rugby and attended Rugby High School. Sensing a religious call, she entered the Poor Clare convent in York, taking the name Sister Francisca. She made her first vows as a nun in 1962, indeed on the opening day of Vatican II. The Poor Clares are a contemplative order, founded by St Clare of Assisi (1194-1253) under the guidance and inspiration of St Francis. Their life is still based on the rule St Clare wrote for herself and her sisters. Although practices have varied, the Poor Clares are regarded as one of the most austere women’s orders in the Roman Catholic Church. The nuns follow Clare’s ideals of prayer, community, simplicity and respect for the environment. Their lives are devoted to prayer, penance, contemplation and manual work. They celebrate the Divine Office at regular times throughout the day, bringing to God the needs of the world and of the church.

Rumsey applied to study at the University of Wales Lampeter in the late 1990s. At this time, it was almost unheard of for a member of a Roman Catholic enclosed religious order to attend a university. It was far from easy for Rumsey to obtain the necessary permissions from the ecclesiastical authorities. However, the Department of Theology and Religious Studies at Lampeter offered a very popular MA in Celtic Christianity, taught by leading experts including Jonathan Wooding and Tom O’Loughlin. Rumsey comments that they, together with all the Theology staff, were very understanding of her unusual situation and did everything they could to facilitate her progress. She made many good friends in Lampeter and enjoyed sharing in the life of the chaplaincy and worshipping in the chapel. After successfully completing her Masters, she went on to study for a PhD and then a post-doctoral license, supervised by Tom O’Loughlin. She comments that although O’Loughlin demanded the highest standards, he was always fair, ready to help and an inspiring teacher.

Rumsey’s PhD, completed in 2006, was entitled ‘Sacred time in early Christian Ireland: the Nauigatio and the Céli Dé in dialogue to explore the theologies of time and the liturgy of the hours in pre-Viking Ireland. It also became Rumsey’s first book, published by T. & T. Clark in 2007. She discussed the different ways in which two eighth- and ninth-century Irish monastic groups understood sacred time. She also examined the influential Nauigatio Sancti Brendani, the eighth- or ninth-century tale in which St Brendan and his companions set sail to discover Tír Tairngire, the Land of Promise. Mackley commented, ‘Rumsey’s work is immensely readable and is a valuable contribution to the study of the Nauigatio and our understanding of the development of Irish Christianity.’

Rumsey followed it up with Women of the church: the religious experience of monastic women, (Columba Press, 2011). She examined the way women have been treated in religious communities, chronicling the experience of monastic women throughout Christian history. The timescale extended from the Desert Mothers of the fourth and fifth centuries to the current debates about enclosure. Writing in Church Times, Dunstan commented ‘The writing is detailed and scholarly, and yet fluent and moving. For anyone interested in women religious, this is an eloquent account.’

Rumsey’s most recent book is Lest she pollute the sanctuary: the influence of the ‘Protoevangelium Iacobi’ on women’s status in Christianity, (Brepols, 2020). She examined a second-century apocryphal text, said to be the most influential Christian writing that most have never heard of. The text, said to have been written by Jesus’ half- or step-brother James, described the life of the Virgin Mary, up until Jesus’ birth and the visit of the Magi. Rumsey argued that the presentation of Mary in this writing, with an extreme and unreal emphasis on her purity, became an unattainable model for all women. She then assessed the way this picture has influenced the Christian perception of women down through the generations up to the twenty-first century.

Rumsey is a Visiting Scholar and part time lecturer at Sarum Theological College; she is also an honorary associate professor at the University of Nottingham. She is a member of the Society for Liturgical Study, the Catholic Theological Association, and the Council of the Poor Clare Federation of Great Britain. She has written many articles  and is a member of the editorial board of Studia Traditionis Theologiae: Explorations in Early and Medieval Theology. Alongside this, she is Mother Abbess of the Poor Clare community in Arkley, Barnet; currently this consists of ten nuns. When not speaking and writing, she cooks for the group and cares for the convent dog.

Index Theologicus. (n.d.) ‘Lest she pollute the sanctuary’: the influence of the ‘Protoevangelium Iacobi’ on women’s status in Christianity. Retrieved March 25 2021 from https://ixtheo.de/Record/1745161074/Description#tabnav