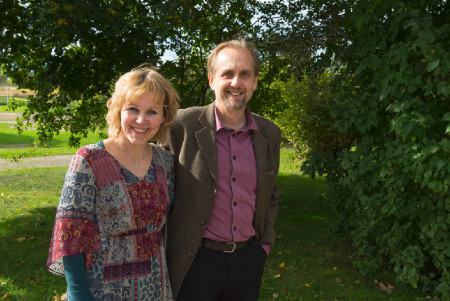 Michael Greed was involved in translating the Bible into Tatar, a language spoken by well over five million people in European Russia and Siberia.

Greed came to St David’s University College in 1978 to study English and Theology. During his time at Lampeter, he was first treasurer and then secretary of the Christian Union. He graduated with a 2:1 in 1981.

In 1988 Greed married Teija Vormisto, a native of Tampere, in western Finland. The next year, he and Teija joined Wycliffe Bible Translators. They were quickly seconded to Wycliffe’s partner organization, SIL International. SIL defines itself as a ‘global, faith-based non-profit [organization] that works with local communities around the world to develop language solutions that expand possibilities for a better life. SIL studies, develops and documents languages, particularly lesser-known languages. It aims to expand linguistic knowledge, promote literacy and translate the Bible into people’s ‘heart language.’ Its activities may include language assessment and documentation, literacy and education, and providing health and community development resources. Some of the language groups are tiny; for instance, Orok was recently listed as having only 47 speakers and Ket just 210.

Michael, Teija and their six month old daughter moved to Leningrad, (now St Petersburg), in 1991. Then, two years later, they relocated to Kazan in central Russia, (by this time with a small son as well as a daughter). Their aim was to learn the Tatar language, so they could be involved in the project to translate the Bible into Tatar. Situated at the confluence of the Volga and Kazanka rivers, Kazan is the capital of the Russian republic of Tatarstan. The constitution of Tatarstan defines it as a multi-ethnic republic; it has two official languages, Russian and Tatar. The largest ethnic groups are Tatars, a Turkic people, and Russians. The alphabet used for the Tatar language has varied. In 1927, the Latin alphabet officially replaced Arabic as the Tatar language alphabet. However, at the end of the 1930s, Latin script was replaced by Cyrillic. More recently, perestroika triggered an active struggle for the rebirth of Tatar national identity, culture and language.

Some portions of the Bible had been translated into Tatar in the 19th and early 20th centuries. However, after the fall of the Soviet Union, the Institute of Bible Translation, SIL International and the United Bible Societies formed a team to translate the entire Bible into Tatar, working on Old and New Testaments simultaneously. The Incil (New Testament) was published in 2001; the first copies of the complete Bible, the Izge Yazma were printed in 2016. Greed has written of the way translating ancient texts into Tatar enhanced the language and its capacity. The Bible contains writings from a wide variety of literary genres; some of these, for instance Hebrew poetry with its distinctive parallelism, were unfamiliar in Tatar. The Tatar Bible contained a number of new words, concepts and expressions, (for instance imandaş meaning ‘fellow believer.’ Iman means faith and daş indicates a shared experience). An academic reviewer commented that the Izge Yazma had expanded the capacity of the Tatar language to express a variety of terms and concepts, as well as contributing to the evolution of its literary status.

In 2000, Greed moved back to St Petersburg to become Associate Director of SIL International in the post-Soviet states. By this time, he had been able to train some Tatar colleagues to continue the translation of the Bible. Greed’s direct involvement finished at this time, therefore. In 2003, he and Teija moved to Lahti, in southern Finland. From 2008 to 2013, he was director of SIL’s work in the post-Soviet states. Then he spent three years studying for an MA in Global Leadership at Gloucester University. Since 2016, he has been Communications Director for SIL International in Eurasia. His role involves overseeing SIL’s communications from the Sahara Desert to Siberia.

Greed, M. (2018). The translation of the Bible into Tatar enriches the Tatar language. Retrieved February 1 2021 from https://eurasia.sil.org/about/news/translation-bible-tatar-enriches-tatar-language