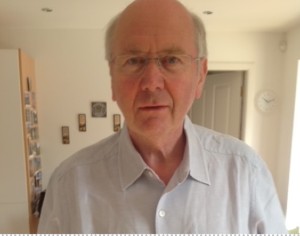 Idris Jones was bishop of Glasgow and Galloway, and Primus of the Episcopal Church in Scotland.

Idris was born in the Black Country to Edward Jones and his wife Alice (née Burgess). He attended West Bromwich Grammar School; he has said he only really enjoyed his education once he reached the sixth year. However, he first felt called to the priesthood when he was only twelve years old. He remembers this was largely due to the influence of the vicar at the church where he sang in the choir.

After leaving school, Jones studied at St David’s College Lampeter, graduating in 1964. He says ‘The debt that I owe … is almost beyond description. Firstly for admitting me as an undergraduate and then for the privilege of being lectured by so many outstanding members of staff and giving me a basis in higher education that has stood the test of time.’ Having lived in England and Wales, his next destination was Scotland. He trained for the priesthood at New College, Edinburgh, where he was awarded a Licentiate in Theology.

Jones was ordained deacon in 1967 and priest in 1968. His first clerical post was back at home in Staffordshire; he served as an assistant curate at St Mary’s Stafford for three years until 1970. Following this, he worked as Precentor of St Paul’s Cathedral, Dundee, from 1970 to 1973. In this role, he was responsible for directing the cathedral’s singing and choral services.

In 1973, Jones took up what was to be his last role outside Scotland; he became priest-in-charge of St Hugh’s, Gosforth, in the outskirts of Newcastle-upon-Tyne. It was also in 1973 that he married Alison Margaret Williams; they went on to have two sons.

Jones moved north again in 1980 to become rector of St Mary’s and St Peter’s, Montrose with St David’s, Inverbervie. Alongside working, he managed to find time for further study; he was awarded the Doctor of Ministry degree by New York Theological Seminary in 1987. After leaving Montrose, he spent three years as Anglican chaplain at Dundee University combined with priest-in-charge at All Souls, Invergowrie. His last role as an ordinary parish priest was as rector of Holy Trinity, Ayr, starting work there in 1992. He also completed a diploma in Person Centred Therapy, and was active as a lay psychotherapist.  He was Director of Pastoral Studies at the Theological Institute of the Scottish Episcopal Church from 1995 to 1999, (while still priest at Holy Trinity).

In 1998, Jones was consecrated Bishop of Glasgow and Galloway. His new diocese covered south-west Scotland, (Wigtonshire, Kirkcudbright, Dumfriesshire, Ayrshire, Lanarkshire, Renfrewshire, Dunbartonshire and part of Stirlingshire). In 2006, he was elected Primus of the Scottish Episcopal Church, and therefore leader of Scotland’s 50 000 Anglicans. At the time of Jones’ selection, the bishops were divided evenly between two candidates; in the end, he was appointed by ‘lot!’

Jones comments that ‘presiding bishop’ or ‘moderator bishop’ might be a better title than ‘primus’. Rather than being an archbishop, the Primus is regarded as first among equals (‘primus inter pares’). He is elected by the other six current Scottish bishops to act as convenor at their meetings and as chief consecrator for Bishops. He also represents them and the wider church at home and throughout the Anglican Communion. Jones was one of the 657 bishops who attended the fourteenth Lambeth Conference, held in Canterbury in 2008. He has commented ‘And it was incredible to have experts from all areas of secular life bringing us up to speed on issues like climate change.’

Jones retired in 2009. He enjoyed golf and gardening, offered priestly ministry when needed, and occasionally played the organ for his local church. However, he has also been active in the Trades House of Glasgow. Trades House was created in 1605 to help protect and support Glasgow’s crafts people; today it is a charity focusing on educational initiatives and supporting people in need. The House and its fourteen trades distribute around £600 000 a year to charity, as well as organizing craft awards and helping apprentices. Jones was Collector of the Trades House in 2012-2013, then Late Convenor in 2013-2014. After that, he was Deacon Convenor in 2014-2015. In this role, he had the honorific position of ‘Third Citizen’ and was involved with the Lord Provost in ceremonial functions.

Jones became an honorary fellow of University of Wales Lampeter in 2007.