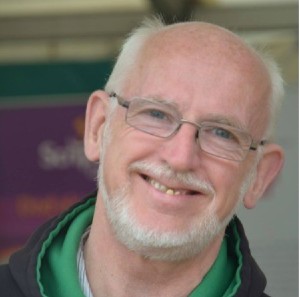 Aled Edwards is chief executive of Cytûn: Churches Together in Wales and a campaigner for displaced people.

Edwards is a Welsh-speaking native of North Wales. He was brought up in Trawsfynydd, a  village in Snowdonia. Sadly, his father, David, died just before Aled’s sixth birthday; he was brought up by his mother, Katie. He attended Ysgol y Moelwyn, Blaenau Ffestiniog and then studied History and Theology at St David’s University College. At Lampeter, he became president of the college’s Christian Union. After graduating, he trained for the priesthood at Trinity College, Bristol. He was ordained deacon of the Church in Wales in 1979 and priest in 1980.

Edwards’ first clerical post was as assistant curate at Glanogwen, a few miles south east of Bangor. Following this, he worked as vicar of Llandinorwig with Penisa’rwaun (again near Bangor) from 1982 to 1985. His next role was as rector of Botwnnog, a joint Anglican/Presbyterian Local Ecumenical Project on the Llŷn Peninsula. In 1999, he moved south to become Vicar of Eglwys Dewi Sant in central Cardiff.

Following Welsh devolution, Edwards became Cytûn’s first National Assembly Liaison Officer in 1999. As part of his new role, he became very actively involved in politics. He has commented ‘I have a deeply held conviction that ecumenism flows from the very will of God for his church and world. I believe passionately in a Wales where people come together in a vibrant and new sense of nationhood in a society where no-one gets left behind – especially the most vulnerable and excluded.’ Edward’s first book was Transforming Power: a Christian Reflection on Welsh Devolution, (Cyhoeddiadau’r Gair, 2001). He was editor of From Protest to Power: stories from The National Assembly for Wales (Cyhoeddiadau’r Gair, 2003). He has been a strong supporter of Welsh devolution, writing ‘Post-devolution Wales has become a more inclusive and welcoming community increasingly shaped by a shared commitment to equal opportunities and human rights.’

In 2006, Edwards became chief executive of Cytûn. Also that year, he was awarded an OBE for charitable services in Wales.

Throughout his time at Cytûn, Edwards has been known as a campaigner for displaced people. He has been chair of the Welsh Refugee Council and of the Cardiff-based charity, Displaced People in Action. As well as advocating, DPIA has helped displaced people to acquire English language skills, to retrain and to find employment.

Though DPIA, Edwards initiated WARD (Wales Asylum Seeking and Refugee Doctors Group).  Despite their huge potential, it was extremely difficult for displaced doctors and dentists to integrate into the UK system. The process was frustrating, as well as expensive. The WARD scheme, which began in 2002, aimed to help asylum seeking doctors gain GMC registration. In particular, it helped them pass the English language tests required for them to work in the National Health Service. It also provided a drop-in centre, where they were able to access the Internet, medical journals and other facilities. In 2018, Edwards commented that this world leading scheme had retrained over a hundred GMC registered medics and could have been worth over £30 million to the NHS. Brian Gibbons, the former Welsh Assembly Minister for Health and Social Services, has said ‘If we have people who are trained as doctors in Wales then we want them to work as doctors. With this kind of scheme everyone benefits – the doctor who can use his skills, the NHS and patients.’

In Autumn 2008, Edwards spent a fortnight’s holiday in California, campaigning with the Barak Obama campaign. He enjoyed his time with the team that trained volunteers to make phone calls to voters in swing states. He also spoke on the European response to the election at a campaigning event in Sonoma, in California’s wine country. Edwards described his experiences in West Wing Wales – Obama for America, a Welsh campaign experience (Cyhoeddiadau’r Gair, 2009). He has talked about seeing history unfolding before his eyes.

Edwards was a member of the Wales Committee of the Equalities and Human Rights Commission from 2007 to 2017. He was received as a member of the Gorsedd of Bards in 2008, taking the Bardic name Aled Madryn. He was awarded a Recognising Achievement Award by the Welsh Assembly Government in 2010 and became a Church in Wales Metropolitan Canon in 2014. He was a director of the Millennium Stadium plc between 2013 and 2017. In addition, he has broadcasted regularly on both Welsh and English language TV.

Away from work, Edwards was a keen distance runner, even competing in ultra marathons to raise money for charity. As well as running the London marathon, he completed the London Royal Parks 50 km ultra and the Race to the Stones 100 km race (following the Ridgeway national trail). He has been married to Marie, a speech and language therapist, for over forty years. They have three adult children, Seimon, Meleri and Steffan and six grandsons.

Anglican Communion News Service. (2006, May 4). Churches Together in Britain and Ireland on behalf of CYTUN. [Press release]. Retrieved January 15 2021 from https://www.anglicannews.org/news/2006/05/churches-together-in-britain-and-ireland-on-behalf-of-cytun.aspx

Edwards, A. (2018). Silence is not an option – Wales must advocate for the poor and oppressed. Retrieved January 15 2021 from https://nation.cymru/opinion/silence-is-not-an-option-wales-must-advocate-for-the-poor-and-oppressed/

Edwards, A. (2017). Evidence for Local Government and Communities Committee. Response from Displaced People in Action. Retrieved January 18 2021 from https://business.senedd.wales/documents/s57718/RAS%2046%20-%20Displaced%20People%20in%20Action.h

Edwards, A. (2011). Before the referendum tomorrow, ask what devolution has done for Wales. Retrieved January 18 2021 from https://www.opendemocracy.net/en/opendemocracyuk/before-referendum-tomorrow-ask-what-devolution-has-done-for-wales/