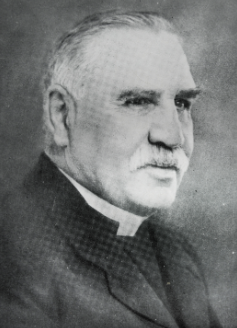 Alf was born in Rhymney, a few miles south-south-west of Ebbw Vale. He was the son of Jenkin and Elizabeth Mathews; his father was chief accountant and secretary of the Rhymney Ironworks and also a magistrate. Alf was the fourth son; he had three sisters. He was educated in London, at Christ’s Hospital Blue Coats School. Then, probably at the age of fifteen, he moved to Llandovery College, where he learned to play rugby. Mathews is recorded as playing for the college against Swansea; he scored a try and Llandovery won by seven tries to nil.

Mathews entered St David’s College Lampeter in 1883, graduating with a BA degree in 1886. He was a good all-round sportsman, excelling at tennis and fives. He competed in the mile, steeplechase and obstacle races at the College Athletic Sports of 1885. However, his best sport was rugby. He was vice-captain of the Rugby XV in the 1884-85 season. It was said of him that he

‘has contributed very largely to the success of the team both in the field and out of it. As one of the team’s organisers he has been most enthusiastic and as a player most unselfish, passing often and generally at the proper time. He is not fast but makes good use of his pace. This season he was first reserve half-back for Wales. May he succeed in getting the much-coveted ‘Colours’ next year.’  (St David’s College and School gazette, no.1, May 1885) 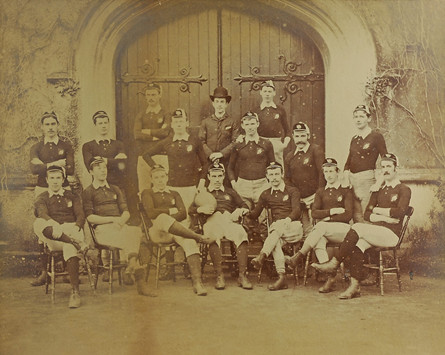 St David’s College rugby team, season 1885-86. A.A. Mathews is seated in the centre, with the ball. E.M. Rowland, who also played for Wales, is on the extreme left in the middle row.

Mathews won his only cap for Wales in the match against Scotland, played at Cardiff Arms Park on January 9 1886. The Welsh captain, C.H. Newman, is said to have withdrawn on the morning of the match. Mathews partnered ‘Buller’ Stadden of Cardiff at half-back. During the match, Wales experimented with playing four three-quarters instead of three. This was the first time this had been done at international level. However, the eight Welsh forwards played badly and were no match for the Scots with nine men there. The Welsh backs were given few opportunities to display their skills. Halfway through the match, Wales reverted to the traditional formation, but by then the damage was done. Scotland won by two goals and one try to nil. Wales jettisoned the four three quarters formation for the next four seasons.

Mathews graduated with a BA degree in June 1886. He was ordained deacon in 1887 and priest in 1888. He served as curate at Holy Trinity Church Swansea from 1887 to 1892 and then as vicar there until 1897. He played regularly for Swansea during the 1887-88 and 1888-89 seasons. In particular he was part of the Swansea team that played against the New Zealand Natives, (the first overseas rugby team ever to tour). The Natives won 11-0. Mathews’ first-class career did not continue long after this, although he continued to play for his parish’s team. He also became a referee, gaining a reputation for being scrupulously fair.

Holy Trinity Church, where Mathews worked, was in the centre of Swansea. It had been built in 1843 to attempt to keep pace with the rapid increase in the town’s population.  Mathews was popular there and became quite a personality in the town. After he had finished playing competitive rugby, he formed the Trinity Football Club for the local young men. In return they gave him a bicycle. Then, in 1897, Mathews left to become vicar of Blaenavon with Capel-Newydd in Monmouthshire.

The next year Mathews married Ethel Frances Evans, the daughter of Dr Edward Beynon Evans, a Swansea GP. The couple had four daughters and one son, Kenneth, who became military chaplain on the cruiser Norfolk and was awarded a DSC. Alf and Ethel’s youngest daughter, Barbara, married the conservative politician Henry Brooke, and eventually became Baroness Brooke of Ystradfellte. Their grandson, Peter Brooke, was Secretary of State for Northern Ireland from 1989 to 1992 and one of the architects of the peace process.

In 1904 Mathews moved to St Paul’s Church, Newport, where he stayed until 1933. In 1930 he was also appointed Rural Dean of Newport and a Canon of Monmouth. It was said of him, ‘He was a man of untiring activity and of boundless energy. Immediately on his arrival he threw himself wholeheartedly into the work of the Parish. By his genial and most sympathetic manner he soon won the confidence of his congregation and immediately set out on a programme of Church extension.’ He also worked tirelessly to support the church overseas, in particular raising funds for hospitals at Peshawar and Mombassa.

Mathews’ ministry meant he understood the problems caused by poverty and unemployment. In particular, he was aware of the miseries created by alcoholism. Sometime before the First World War, he took the pledge to abstain from drinking alcohol. Even in the days of his rugby career, he was wary of the demon drink, commenting, ‘As a member of the Swansea football team I can testify there is no need for alcoholic drink as a stimulant in athletic games, for although a total abstainer, I never lack energy nor lose my mind, neither do I train during the week, and I believe were all to abstain from alcoholic drinks there would be no need for training.’

In 1933, Mathews moved to his final parish, St Stephen and St Tatham at Caerwent. After his retirement, he spent the last seven years of his life at Great Milton, Llanwen, just outside Newport. He is buried with Ethel in the churchyard of St Mary’s Parish Church, Llanwern. His grandson Henry Brooke remembers ‘a very large kindly man, with a bristling white moustache, who did not say very much but who radiated friendliness.’