From Pembrokeshire to New South Wales

Charles Ferdinand Brigstocke was born in 1808 in Llawhaden, Pembrokeshire, and followed his father Thomas, vicar of Llawhaden, into the church. After attending school at Haverfordwest he entered St David’s College at the age of twenty, and upon graduating in 1832 his first appointment was in Bristol. He returned to Pembrokeshire as a curate under Rev. Dr Humphrey in Tenby and was ordained by the Bishop of Winchester in 1837. A year later, with a recommendation from the Society for the Propagation of the Gospel and the approval of the Bishop of London, Brigstocke was appointed as chaplain to New South Wales.

Following a few weeks in Ryde after his embarkation on 6th December, Brigstocke embarked on the five-day journey to the newly founded town of Yass, which at that time had no church or parsonage, requiring the new chaplain to live in a single-roomed hut. Brigstocke conducted services three Sundays a month, initially in the Old Court House and then in a temporary church. During this period, he was actively involved in raising funds to build a church for the town, and in 1847 the foundation stone of St Clement’s Church was laid and opened in 1850. 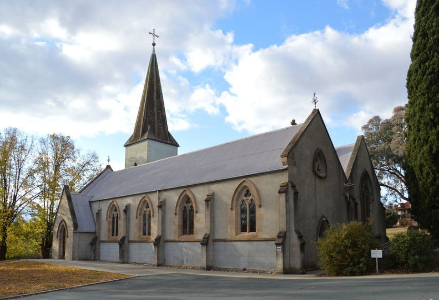 As well as conducting services at Yass, Brigstocke visited towns and isolated farms throughout a vast area which included Tumut, Gundagai, Binalong, Boorwa, Adelong and Tarcutta. Many of his journeys involved travelling distances of between 60 to 134km, and like many other itinerant ministers he would occasionally have to travel to areas outside of his district, known as ‘no-man’s land’. Bishop William Broughton, on one of his numerous visits sympathised with the immensity of Brigstocke’s task and in time other ministers were appointed to the southern districts, but Brigstocke’s parish remained large. However, he was a man of great energy for in addition to his parish work he was responsible for the building of a rectory and school, was active in the Mechanics Institute, involved with the construction of a hospital for the town, provided the local convicts with religious instruction, and found time to act as Secretary to the subscription library. In April 1844 he married Susan Adye with whom he had seven children, two of which died in infancy.

In 1841 however, Brigstocke became involved in an incident which forced the bishop to revoke his licence. An anonymous letter appeared in the Sydney Herald accusing the local magistrate, Richard Hardy ‘with breaking his Sabbath and countenancing moral laxity in the neighbourhood by riding to the hounds on the Sabbath’1. Brigstocke was rumoured to have been the author and an inquiry was conducted, coincidentally one of the commissioners was Rev. Thomas Hassall, known as the ‘Galloping Parson’, formerly of Lampeter Grammar School. A comparison between the handwriting in the letter and Brigstocke’s own was undertaken, and although there was considerable suspicion that he was the author, the lack of evidence enabled him to be reinstated as incumbent of Yass.  The continuing suspicion of his authorship however, seems likely to have influenced the awarding of only one farthing in damages when he won an action in the Supreme Court against Hardy for malicious libel.

Brigstocke was again in the papers in July 1852 when he undertook the burial of seventy-three victims following the terrible flood of Gundagai, which caused eighty-nine deaths and left only three buildings standing. After twenty years as incumbent of Yass, Brigstocke died following a month’s illness at the age of only fifty-one and was buried outside the vestry door of St Clement’s. His hard work and dedication was recognised by his parishioners who opened a subscription fund for his headstone, a memorial plaque inside the church and provision for his surviving wife and five children.