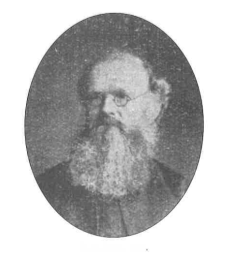 Vicar of Cenarth, Antiquarian and Collector.

David Henry Davies, best known as ‘the Vicar of Cenarth’, was born in 1828 in Cardiganshire. Descended from an old and respected family, he was the eldest son of Daniel Owen Davies, who was a military surgeon with the 18th (The Royal Irish) Regiment of Foot, and Margaret Coakeley Jenkins. His father retired from the army in 1836 and established a doctor’s practice working within Aberporth, Llanarth and New Quay. In 1839 Davies enrolled at Llangoedmor Grammar School and in 1844 was apprenticed to his father. Four years later he was working in London as a ‘visiting assistant’ with Messers Barrow & Nicholson. The outbreak of the Asiatic cholera epidemic of 1848-49 however, had a dramatic effect on Davies and convinced him that missionary work was his calling. He applied to, and was accepted by, the Church Missionary College in Islington, but was persuaded by his father that such work was needed in Wales.

He subsequently opened a dispensary in New Quay and worked as an assistant in his father’s practice. In July 1855 Davies married Anne Harries, the niece of his former schoolmaster and in September of the same year, his father died suddenly from typhoid caught from a sailor. Impressed by his father’s earlier advice Davies decided to take Holy Orders. He spent the next few years learning Welsh and involving himself in parochial life with the support of his former vicar, whilst continuing to work at his dispensary. On 1st October 1862, at the age of 33, Davies enrolled at St David’s College for two years.

He was ordained by Bishop Thirlwall in 1864 and offered the position of curate in the parish of Llanboidy in Carmarthenshire. After one year he moved to the parish of Oystermouth, near to Swansea, and in 1867 was offered the living of Llanon, near Llanelli. The living was a poor one with no vicarage and no funds to repair the parish buildings. However, by 1870 a vicarage had been built with Davies personally raising a large portion of the money, and by 1875 the schoolroom had been extended. Davies was a conscientious and diligent vicar and in 1877 was appointed to the parish of Cenarth in Carmarthenshire. He remained at the parish until his retirement in 1905 aged 77, he died five years later and was buried in Llanllwchaiarn cemetery, near New Quay.

Davies was also a keen naturalist and a renowned antiquarian and collector, although it was not until the death of his second cousin, Revd. Henry Jenkins, who was himself an antiquarian and amateur archaeologist, that Davies had the means to properly indulge his passion. He inherited Jenkins’ collection and the estate of Dyffryn Bern in Ceredigion. Davies became a prominent member of the Cambrian Archaeological Society and regularly loaned pieces from his collection. His interests were wide ranging and included ‘rare books, quaint china, swords and coins, broadsides and pearls, pictures and portraits, stamps and stones’. He was also a book collector, particularly of Welsh books. The Cambrian News and Merionethshire Standard reported in 1903, that Davies owned 2,000 books and pamphlets, including most of the theological works of Griffith Jones and a complete edition of the Archaeologia Cambrensis. In addition to which he had an extensive collection of hymn books and a ballad collection which has been favourably compared to the one owned by Myrddin Fardd.

In 1904 Davies sold his library, including his ballad collection to St David’s College for £110, where it was initially displayed in the Senior Common Room.