Isaac was born in Llanwenog, about five miles west south west of Lampeter. He became a member of Aberduar Baptist Church in Llanybydder. In 1835 he joined Abergavenny Baptist Academy to train for the ministry; the next year he moved with the college to Pontypool. He became pastor of the Tabernacle Welsh Baptist chapel in Neath in 1838. He was energetic almost trebling the number of people in his own congregation and founding new churches at Aberdulais, Glyn Neath and Pontardawe. He also started a Cymreigyddion Society in Neath. However, difficulties arose when his predecessor as minister, Titus Jones, returned to the town and started a rival congregation.

Isaac was suspected of unorthodoxy. Upset by the charge, he accepted a call to the pastorate of Trosnant church, Pontypool in 1841. The next year he married Jemima Thomas at Bethany Baptist chapel, Neath. Isaac is said to have been a magnetic figure, ministering to a church with over two hundred members. However, his time there was to be stormy. In particular, he acquired the nick-name, ‘Lawr ag e, (Down with him). It is said that during one of his rather frequent disputes with his congregation, an elderly lady was irritated enough to call out ‘Lawr ag e.’

Isaac’s ministry at Trosnant came to an abrupt end in 1853, when he controversially converted to Anglicanism. He then studied for two years at St David’s College Lampeter. The minutes of the College Board for June 16 1855 report that he was awarded the Creaton Essay Prize worth £7 for “Swrdwal.” Isaac was ordained as deacon at Llandaff in September 1855, and then as priest in September 1856. His first curacy was at Llangattock-juxta-Neath. In 1858, Isaac moved to Llangathen, about twelve miles east-north-east of Carmarthen. He seems to have been conscientious, managing to increase the number of communicants. He was responsible for a significant restoration of St Cathen’s church. The west gallery was removed, and the building re-floored, re-seated and re-roofed. As well as this, Isaac built a school and a vicarage, and rebuilt a ruined chapel. Isaac stayed in Llangathen until 1871, when he became vicar of Llangamarch in Breconshire. 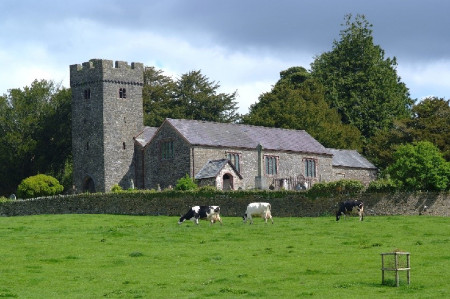 Throughout his life, Isaac was a prolific, but rather unsystematic writer on history, antiquities and philology. As a Baptist, he was a regular contributor to Seren Gomer; after he became an Anglican, he wrote frequently for Yr Haul, the official Anglican magazine. Jenkins notes his miscellany ‘Lyfrgell Llwyd o Llangathen’ (1858-59) and his article on the translators of the Bible, published in 1856. He also won an eisteddfod prize for an essay on Hanes Llanbedr a'r Gymmydogaeth in 1860.

In 1859, Isaac published Siluriana, a volume on the history of Monmouthshire and Glamorgan. The title page describes him as compiler; he had included major extracts from an unfinished and chaotic manuscript written by William Davies (1756-1823). Phillips comments that it is often impossible to distinguish the work of the two writers. The finished work is still disorganized; in the preface, Isaac explained that no consecutive history or chronological order were intended. In addition, some chapters were written independently, often for newspapers of magazines. However, despite its strange editing, the book is full of out-of-the-way information.

Isaac died at Llangamarch on 31 March 1876; there is a tablet in his memory on the south wall of the church. The National Library of Wales holds forty-four small notebooks, containing notes of his sermons.

Bradney, J.A. (1992). A history of Monmouthshire from the coming of the Normans into Wales down to the present time. London: Academy Books

Isaac, D.L. (comp.) Siluriana: or, contributions towards the history of Gwent & Glamorgan. Retrieved July 23 2021 from https://books.google.co.uk/books?id=swsLAAAAYAAJ&pg=PA1&source=gbs_toc_r&cad=3#v=onepage&q&f=false