From missionary work in Canada’s Red River Settlement to Professor of Welsh at St David’s College.

The information regarding David Thomas Jones’s early life is sparse and inconsistent, he was born between 1795 and 1799 and in his own words came from ‘farming stock’. He spent two years studying at Lampeter Grammar School under its founder Reverend Eliezer Williams, and it was during this period that he was accepted by the Christian Missionary Society as a candidate for missionary work. The annual stipend of £40 which the society provided enabled Jones to complete his studies at Lampeter, following which he continued his theological training under Reverend Thomas Sharpe at Mattishall.

By August 1823, having been ordained deacon and priest, Jones was aboard the Hudson Bay Company’s ship Prince of Wales bound for Canada. 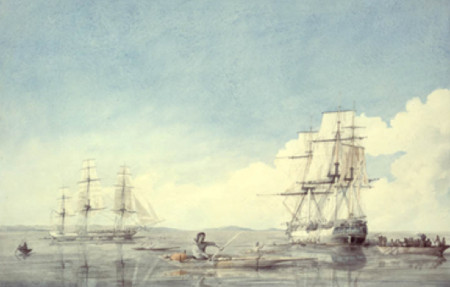 Picture: The Hudson's Bay company ships Prince of Wales and Eddystone bartering with the inuit off the Upper Savage Islands, Hudson Strait, Canada by Robert Hood. Held at Library and Archives, Canada.

It was intended that the inexperienced Jones would work under the authority of John West, the first chaplain of the Hudson Bay Company (HBC) however, West having made himself unpopular with the George Simpson, Governor of the HBC’s Northern Department, had been recalled home. Jones however was considered by Simpson to be ‘a great acquisition’1 and so he proved to be. With the assistance of his co-worker Reverend William Cockran, who joined Jones in 1825, the presence of Protestant Christianity developed rapidly along the Red River. By 1836 they had supervised the building of St Paul’s (known as Middle Church) and St Andrews (known as the Upper Church) as well as establishing an Indian Mission serving the Salteaux Indians. The Church Missionary Society reported that the average Sunday congregation was in excessive of 450 people and that there were over 600 baptized individuals in the settlement. Jones himself was described by one of the settlers as a ‘fine and eloquent preacher; tender-hearted, kind, and liberal to a fault… he was all but idolized’2.

In 1828 Jones briefly returned to Britain returning the following year with his bride, Mary. Shortly after his return he suggested the building of a boarding school or academy ‘for the moral improvement, religious instruction, and general education of Boys; the sons of Gentlemen belonging to the Fur Trade’3. With Governor Simpson’s approval the academy was built and included a separate wing for girls which was supervised by Mary Jones. This proved to be Jones’s legacy for by 1835 twenty-three boys and twenty-four girls attended the Red River Academy, which in 1833 merged with a second academy in Kildonan and in 1849 became St John’s College. However, Jones and Cockran were less successful with the residential school for Indians which had been established by John West, primarily due to Governor Simpson’s opposition and his refusal to allow new Indian children to attend it. 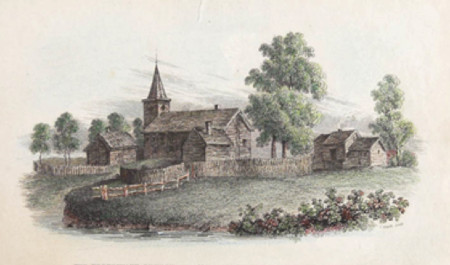 The political atmosphere at the Red River Settlement forced Jones to tread a difficult path. He was shocked by the exploitation of the fur traders but equally horrified by the Indian culture. As chaplain to the HBC and missionary for the Christian Missionary Society, he strove to avoid confrontation and maintain diplomacy. The fraught atmosphere and harsh conditions began to affect Jones’s health. Missionary life in the Red River Settlement involved long hours in frozen conditions in the Fall, Winter and Spring, whilst the Summer was humid and mosquito ridden. In Jones’s journal of 1837 he describes how he rose at 4 am to ride to Grand Rapids, left Cockran at 9:00 am, preached in the Indian settlement at 11:00, returning home at 9:00 pm. Another entry recounts how he and his horse fell into a river and were forced to continue their journey drenched and shivering4.

In 1836 Jones suffered a series of disasters; in June he received the news that his mother had died and that the Christian Missionary Society were no longer able to provide additional support to the Red River Settlement; that summer the HBC ship arrived too late to unload necessary supplies; in August a swarm of birds ruined his barley and in October his wife Mary died during child birth, leaving Jones to care for five children all under the age of five years. On August 11th 1838 he and his family returned home and in 1839 Jones was working as curate at Lampeter Church. Later that year he was appointed Professor of Welsh at St David’s College however, his teaching career was short lived as a paralytic seizure in 1843 forced him to retire to the living at Llangoedmore, where he died on October 26th 1844.

His obituary in Yr Haul reported that ‘as a man Mr Jones was gifted…with the highest virtues; as a preacher he was gifted well above average; as a Christian he was guileless and unprejudiced’5.

This biography made substantial use of an article written by D.T.W. Price which he kindly donated to the University’s archive.

Trove National Library Of Australia. Available at https://trove.nla.gov.au/ [Accessed 23 May 2020].