Prior to his admission to Saint David’s College Howell Jr. had attended Christ College, Brecon. Howell was one of the first students to enrol at Lampeter, joining the college on its opening day, 1 March 1827, at the age of twenty-one. Many of his fellow students were also from farming backgrounds and the prospect of a life away from farming would have offered financial security, status and, for some, adventure. College rules were strict and some students were expelled, and Howell himself was reprimanded in the Michaelmas term in 1828 for an unknown wrongdoing. Offences which could then lead to rustication included swearing, leaving the campus at night, drunkenness and repeated absences without leave.

Howell was ordained as a Deacon in the College chapel in August 1829 and was appointed Stipendiary Curate of Dulas, Hereford. The following year Howell sat for his examinations but was rejected for his Priestly orders, more likely due to an inadequacy in his knowledge of scripture, Latin or theology than for poor conduct. Three years later Howell was appointed Stipendiary Curate of Llansantffraed and Llansbyddyd in the diocese of Saint David’s. In September 1834 Howell successfully re-took his exams and he was ordained as a priest in the College chapel and continued to carry out his priestly duties at Llansbyddyd for the next ten years.

In the mid-1840’s Howell’s life took a very different turn when he was appointed to the district of Montpelier, Jamaica. The Bishop of Jamaica had made requests in the Ecclesiastical Gazette for several vacant appointments on the island and, on the recommendation of his Bishop, Howell was appointed a Curate in Jamaica. One of his earliest duties in 1844 included the burial of the Reverend William Fraser in Falmouth, Trelawny; Fraser had served the church in Jamaica since 1806.

The district of Saint James, Montpellier in Jamaica was originally a sugar plantation. The plantation had changed hands several times since it had been settled by Captain Francis Sadler in the 1740s and, by 1840, the estate was owned by the de Walden family. Following the abolition of slavery the estate, like many in the colonies, began to suffer financially. In 1848 the House of Commons ordered an investigation into the economic situation of the colonies a decade after emancipation; in 1806 West Indian sugar had represented 55.1% of the North Atlantic market but by 1851 it had dropped to a mere 13%. The decline post-emancipation was exacerbated by the economic depression in Europe in 1846-7 which had had dramatic consequences for the Jamaican sugar industry. In the uncertain and fluctuating economic climate Jamaican planters received less and less capital from British merchants and financiers which led to widespread bankruptcy. By the 1850s the estate at Montpelier had moved its production to cattle farming.

Howell Prichard played a significant role in the regeneration of the estate and the island, as did many of the clerical appointees who arrived during 1830s-1850s. Howell himself was brought over for “the relief of the destitute Irish and Scotts” affected by the abolition and economic downturn. The church was one of the pillars of the island during these hard times and it was noted by the Honourable Lord Walden that “The Clergy of the Church of England are acquiring daily more influence over the Negros, and certainly they are co-operating with the proprietors in encouraging industry”. 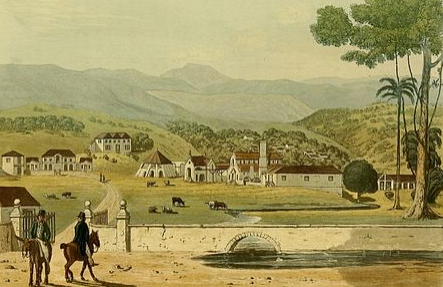 Picture: Montpellier Estate, Saint James , from a Picturesque Tour of the Island of Jamaica by James Hakewell, 1825 Hurst and Robinson & Co. (https://www.wikigallery.org/wiki/painting_206425/James-Hakewill/Montpelier-Estates-St-James-from-A-Picturesque-Tour-of-the-Island-of-Jamaica)

In 1846 Howell married Mary Harriet Marrett, the youngest daughter of Captain Joseph Marrett of the Royal Navy, in Saint Michael’s Church, Swanswick, Jamaica. Just over a year later Mary gave birth to a daughter Mary Elizabeth, and two years later their second daughter Louisa Gwenllian Sarah was born. During this period Howell was involved with the foundation of a new church, the Chapel of Saint Paul’s, Montpellier which was attended by many of the townsfolk from Montego Bay and its outer districts. Howell, writing back to his local newspaper in Wales, the Cardiff and Merthyr Guardian, stated that the foundation “will be interesting to many of your readers” of which he notes many were his friends and relatives. Howell goes on to state “that notwithstanding…having lived many years in this tropical and very wasting climate [he] is in possession of the very best health and spirits”.

By 1850 Howell was a well-established figure on the island of Jamaica and the Jamaica Almanac of 1851 noted he was also the bank manager for Saint James’ saving bank, not then uncommon for reverends and members of the church. He is also listed as an Island Curate working in Saint James. Howell kept himself informed of the developments in his home county and country through his subscription to the Cardiff and Merthyr Guardian.

Having been one of the first students of the college, Howell was also one of the first graduates and in 1853 he returned to successfully take the examination for his Bachelor in Divinity Degree under the new charter of 1852. Howell did return to Jamaica but after a few years of ill health he eventually left the island and, in 1859, he took up a curacy in Knockin, Shropshire.

The 1871 Census records that Howell’s family had been augmented by a third daughter, Howellina Powell Milner Prichard, who was born in 1864, while the papers of that year reported his patronage of the Knockin Choral Society. In 1876 Howell was preferred to the living of Melverley in Shropshire where he lived for the next five years. Howell died in the April 1881 at the age of 76, and was buried at Melverly Parish Church.