John Herbert Williams (1919-2003) was the prison chaplain responsible for the pastoral care of Ruth Ellis, the last woman to be hanged in Britain.

Williams came from Pentwyn-mawr, nine miles north-east of Caerphilly. His parents were Thomas and Mary Williams. He attended the local grammar school and then went to St David’s College Lampeter to read English. After that he went to Salisbury Theological College to prepare for the priesthood. He was ordained by the Bishop of Monmouth in 1943, and worked as a curate at Blaenavon in Monmouthshire, and then Llanishen, Cardiff. In 1948, he became priest-in-charge at Rogerstone, in the suburbs of Newport. Also, in 1948, he married Joan Elizabeth Morgan; they had one son.

During his time in Cardiff, Williams did some pastoral work in the local prison. In 1948 he became a full-time prison chaplain, working initially as assistant chaplain of Strangeways Prison in Manchester. A chaplain’s duties were and are prescribed by law. They must visit newly received prisoners within twenty-four hours of their arrival, visit all prisoners under segregation or in the prison hospital and take religious services. They are also involved in broader pastoral work, for instance in supporting prisoners and staff in particularly difficult times. At this time, British prison chaplains were also responsible for caring for prisoners waiting to be hanged. One of Williams’ predecessors at Strangeways, Joseph Walker, reported that he had attended the executions of five men and one woman.

After Strangeways, Williams spent seven years in London, working at Holloway Women’s Prison. It was there that he supported Ruth Ellis, a nightclub hostess who had been sentenced to death for the murder of her former partner, David Blakely. Williams attended her on the day of her execution. Ellis’ trial became a cause célèbre. Not only was she the last woman to be hanged in Britain, but the revulsion against her punishment became one of the triggers for a defence of ‘diminished responsibility’ introduced in the Homicide Act of 1957. 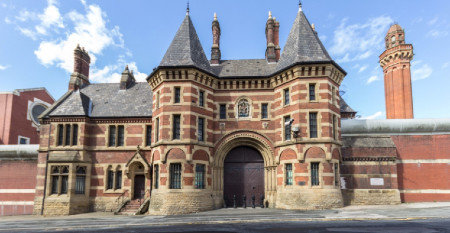 Following his time at Holloway, Williams did two more seven-year stints at Birmingham Prison and at Wormwood Scrubs, in west London. At the Scrubs, he was able to persuade Sir David Willcocks to bring his Bach Choir to sing every Christmas. This became an important event in the prison’s annual calendar, continuing for over twenty-five years. Williams’ obituary in The Daily Telegraph commented, ‘In each of these demanding spheres he displayed the qualities of a priest of an older school, whose pastoral work was steeped in prayer and whose espousal of traditional values was tempered by a deep compassion.’

Williams was appointed South East Regional Chaplain of the Prison Service in 1971. This meant he was responsible for overseeing the region’s chaplains; his wisdom and experience proved to be of great value to prison governors as well as to chaplains. In 1974, he moved to the Home Office as Deputy Chaplain-General. His influence now extended to policy-making, recruitment and training.

In complete contrast, Williams was Priest-in-Ordinary to the Queen for three years, alongside his role at the Home Office. In this role, he assisted in services at the Chapel Royal in St James’s. After his retirement from the Prison Service in 1983, he became chaplain of the Royal Victorian Order and chaplain of the Queen’s Chapel of the Savoy, the home of the Order. On his final retirement in 1989, he was  given the honour LVO, (Lieutenant of the Royal Victorian Order).

The Daily Telegraph: Obituary of The Reverend John Williams: Prison chaplain for 35 years who ministered to Ruth Ellis and later to the Queen and the Royal Victorian Order. (2003, December 24). Daily Telegraph. Retrieved November 5 2020 from https://infoweb-newsbank-com.ezproxy.uwtsd.ac.uk/apps/news/document-view?p=UKNB&docref=news/0FFA6E25ACFBEBC6.

Phillips, P. (2016, September 6). The statutory presence of the Church of England in prisons should give it a voice on issues of imprisonment, but it remains largely silent [Blog post]. Retrieved November 5 2020 from http://eprints.lse.ac.uk/76474/