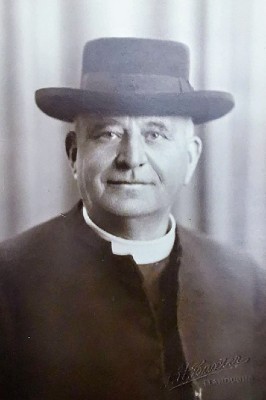 John Silas Evans (1864-1953) was the author of popular astronomy books in English and Welsh, as well as being a priest.

Picture: John Silas Evans, from the Welsh Portrait Collection at the National Library of Wales.

Evans was a local man; he was born in Pencarreg on 11 March 1864. His father was named Evan Evans. John Silas Evans attended Alcwyn C. Evans’ school in Carmarthen and then the old grammar school, Lampeter. He was awarded the Phillips and Treharne scholarships to St David’s College. He graduated in 1885, having won the Welsh and science prizes. For the next year, he taught at a college in Coventry. After that he was ordained deacon in St Asaph’s cathedral in 1887 and then priest in 1888. Evans had an exceptional history; it was said he could conduct services almost completely from memory.

Evans’ first clerical post was as curate at Diserth, Denbighshire, from 1887 to 1890. Following this he was curate of Rhos-ddu, near Wrexham, from 1890 to 1895, vicar of St Asaph and vicar choral of the cathedral from 1895 to 1901 and vicar of Gyffylliog, west of Ruthin, from 1901 to 1909. His last post was as vicar of Llanrhaeadr-ym-Mochnant with Llanarmon Mynydd Mawr (1909 to 1938). Llanrhaeadr-ym-Mochnant is situated in the Berwyn mountains, between Bala and Oswestry. The church’s best-known former clergyman was William Morgan, who first translated the Bible into Welsh. Evans became a canon of St Asaph in 1928.

Evans was a keen astronomer, using a four-inch telescope made by Tulley. He submitted a Welsh language manuscript about astronomy to the 1920 National Eisteddfod’s competition for an original new work. However, although the judges praised his contribution, they did not think it appropriate for the belles lettres competition. It was not considered for the prize therefore. Evans brought his work out as a book, Seryddiaeth a Seryddwyr, in 1923. It is divided into two parts; the first section on astronomy itself is followed by short biographies of the great astronomers. The book ends with a chapter on astronomy in Wales. A review in Archaeologia Cambrensis described it as the first serious work in Welsh on astronomy. Evans himself coined many of the technical terms used in it.

He followed Seryddiaeth a Seryddwyr with an English-language book on popular astronomy, Marvels of the sky, (published by A.H. Stockwell, 1931). He dedicated Marvels of the sky to ‘my constant and faithful companion, my old Refractor telescope.’

Also, in 1931 he issued Ad astra, a compilation of eight sermons concerning the relationship between science and religion. In the introduction, Evans described the component items as ‘a short series of sermons, or addresses, of an astronomical character, on the religious aspect of the science.’ In the first talk, entitled ‘In the beginning, God,’ he discussed several controversial points, including the implications of scientific estimates of the age of the earth for the creation story in Genesis. The sixth sermon, ‘Are the planets inhabited?’ considered the possibility of alien life forms. The seventh address, ‘Which was the star of Bethlehem?’, examined the scientific basis of the well-known star, as well as its broader spiritual meaning.

In November 1923 Evans was elected a fellow of the Royal Astronomical Society; he remained a member until December 1932. Such was his passion that he had the roof of the nave at Llanrhaeadr-ym-Mochnant church painted with stars and planets, on a blue background.

In November 1923 Evans was elected a fellow of the Royal Astronomical Society; he remained a member until December 1932. Such was his passion that he had the roof of the nave at Llanrhaeadr-ym-Mochnant church painted with stars and planets, on a blue background. 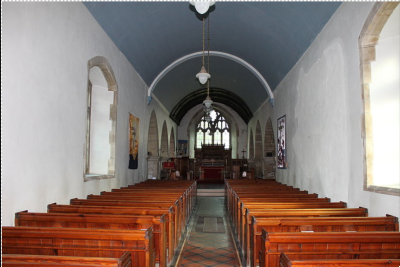 Evans’ other interests included folklore and local history. He wrote a history of his parish, Hanes Llanrhaeadr ym Mochnant; this was published in 1940. He described local landmarks, including the  Pistyll Rhaedr waterfall and a number of nearby standing stones and barrows. He recounted the area’s ancient history, its religious life and its folklore. He also wrote about the interior of his church, St Dogfans, which he described as ‘very old, though, naturally, it has been restored many times.’

On his retirement in 1938, Evans moved to Aberystwyth, wanting to be within easy reach of the National Library of Wales. He named his new home, Ad astra. Eventually he returned home to Pencarreg and wrote a local history of the parish. He died there on 19 April 1953 and was buried in the churchyard.