Leslie Badham combined a church ministry which included being a chaplain to the queen, with radio broadcasting, lecturing and writing.

Leslie Stephen Ronald Badham (1908-1975) was born in Cosheston, Pembrokeshire; his father Stephen was headmaster of the local school. Five children were born to the family. Sadly, two siblings died in infancy; later a brother and sister died of tuberculosis in early adulthood. The son had been destined for the priesthood; Leslie, his younger brother, felt he should enter the ministry in his place.

Badham read English at St David’s College Lampeter, where he became Senior Scholar in his final year. He was then awarded a scholarship to Jesus College, Oxford, where he took a second degree in theology. After his ordination, his first posts were as curate in Pembroke Dock and then in Tenby. After that he became vicar of Walton West with Talbenny, still in Pembrokeshire. He married Effie Garratt in 1938; unusually for that time she had a BSc from the London School of Economics. The couple had four children; their son Paul was later to be head of department and Professor of Theology and Religious Studies at University of Wales Lampeter.

When war broke out, Badham became a chaplain in the RAF. Many of the people he worked with died in action. Chaplains took on the difficult tasks of writing to the bereaved, recovering bodies from aircraft wreckage and burying the dead. Badham’s son Paul does not know who his godfathers are, as so many of the likely candidates were killed. After leaving the forces, he was awarded the Jesus College living of Rotherfield Peppard, a Chilterns village a few miles west of Henley-on-Thames. As a college living, it had traditionally been held by a scholar; Badham saw himself as part of that line.

Badham’s book Verdict on Jesus (Williams & Norgate, 1950) is based on sermons he preached in his parish church. He then refined them as broadcast talks, before editing them again to form a book. As well as examining what Jesus said and did, he wrote about the impact his life and teaching have had down through the centuries. The book looks at Jesus’ social, cultural, political, social and economic impact on the world. A charity, the Newson Trust, exists to distribute Verdict on Jesus. Revd. S.J. Newson, the former vicar of St Andrew’s Chelsea, left his estate to provide copies to all Anglican clergy in the British Isles, so ‘they have the right idea of our Lord Jesus Christ.’ More recently, the trust has also started to give the volume to Methodist and United Reformed ministers. The most recent, 5th edition, introduced by his son Paul, includes three new chapters on the historical Jesus, theism and philosophy and Jesus in the world’s religions. 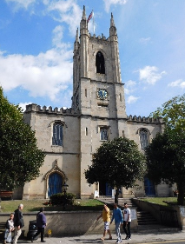 In 1958 Badham became vicar of Windsor Parish Church. In 1964 he was appointed a chaplain to Queen Elizabeth II; his duties included preaching at the Queen’s private chapel in Windsor Great Park. She is said to have had one of the very first copies of Verdict on Jesus! Badham’s other publications include These Greatest Things, a book of Royal Air Force sermons, and Love Speaks from the Cross, examining Jesus’ words from the cross.

Wakeham-Dawson, A., Rance, E. (2020, September 15). From our archive: Sky pilots and the Battle of Britain. Church Times. Retrieved October 1 2020 from https://www.churchtimes.co.uk/articles/2020/18-september/features/features/from-our-archive-sky-pilots-and-the-battle-of-britain