The Reverend Richard Williams Morgan was born in Llangynfelyn, Cardiganshire circa 1815. Nephew of John Williams, the Archdeacon of Cardigan, he was educated at St. David’s College in Lampeter. He was curate of Mochdre, Montgomeryshire, from 1842-53. In 1842, he was appointed perpetual curate of Tregynon, Montgomeryshire, a position he held until 1862.

A few years previously, a group of Oxford Anglican academics and clergymen had grown increasingly unhappy with the lack of seriousness the establishment seemed to give its religious duties.  The resulting Oxford Movement authored a series of tracts establishing doctrine and reforms, which became known as Tractarianism. 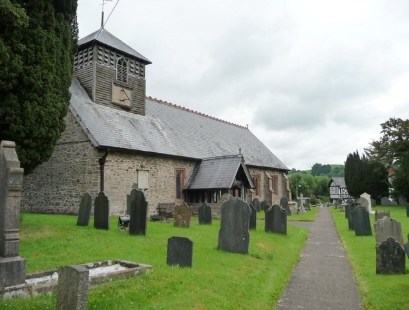 Challenged by many of the arguments the Oxford Movement set out, Morgan became one of many Welsh Tractarians. He was in no way anti-Catholic, but very much anti-Papal and anti-Roman.  As this was not considered to be an extremist viewpoint, he and his fellow Tractarians were generally accepted within the Anglican church.

Like most other Welsh Tractarians, Morgan was a proud Welsh patriot, albeit with a sometimes ‘prickly’ nature.  An outspoken campaigner for the use of the Welsh language in schools and churches, he was fiercely critical of English clergy in Wales (including his own bishop) who did not learn Welsh and only conducted services in English – a language no one understood.  He contended that the administration of the sacraments in a foreign tongue “is not alone false in itself, but calumnious to the Anglo-Catholic faith,” and that bishops who did this were not true church leaders, but bishops in title only.

It is likely that his continued criticism and calls for change resulted in him not only being passed over for higher church appointments, but also led to Morgan being refused communion in his own church in Tregynon in 1857.  Although he did not formally resign his curacy until 1862, he never again held an ecclesiastical post in Wales.

Morgan also played a key role in the Celtic revival movement.  He was one of four men responsible for organising the Llangollen Eisteddfod in 1858. This proved to be a significant historical event, for it is largely accepted that here was where the roots of the current National Eisteddfod of Wales were planted.  He also contributed to The Gorsedd of the Bards (an association made up of poets, writers, musicians, artists and other people who have made a distinguished contribution to the Welsh nation, the language, and its culture) under his Bardic name ‘Môr Meirion’.

In the late 1850’s, Morgan moved to London, where he spent most of his remaining years. His passion for Celtic restoration led him to become co-founder (alongside Jules Ferrette) of the Ancient British Church in 1874.  This religious movement promoted the restoration of the Christian church to the style practiced in the first millennium in the British Isles.  It followed a contemporary Celtic or neo-Celtic Christianity – a type of faith that portrays a gentle, tolerant, 'green', meditative, egalitarian and holistic form of Christian faith and practice.  Morgan was "baptised, confirmed, ordained and consecrated" by Ferrette as the first Patriarch of the Church on March 6th, 1874 and was bequeathed the religious name ‘Mar Pelagius I’.

The Ancient British Church in the UK persisted into the mid-twentieth century. Although it no longer exists, several present-day church bodies may be said to have been derived (or partly derived) from the movement, along with less formal Celtic expressions of faith. Succession lines from Mar Pelagius I are found in the Free Protestant Episcopal Church (now the Anglican Free Communion), and within some Orthodox church branches.

A prolific author, Morgan wrote several books, articles and Bardic poetry in both Welsh and English.  Arguably his most famous work was Verities of the Church, where he expounded on his “deep-founded affection for the Catholic faith, as guarded and propagated by the Apostolic Church of England.”

In addition to his commitment to the Ancient British Church followers, Morgan continued to serve as a Church of England curate three more times, before his death in 1889.

Schlossberg, H. (n.d.). The Tractarian Movement. In Religious Revival and the Transformation of  English Sensibilities in the Early Ninteeenth Century. Retrieved from http://www.victorianweb.org/religion/herb7.html