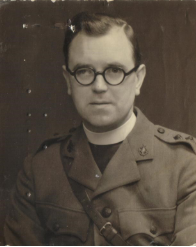 Born in 1915, at Goodwick, Pembrokeshire, Thomas James Stretch was educated locally, gaining the offer of a place at Keeble College, Oxford. Unfortunately, a serious eye injury on the cricket field prevented him from accepting the offer and instead, in 1934, he entered St David’s College, where it soon became evident that Oxford’s loss was Lampeter’s gain.

For Stretch excelled both academically, winning several prizes, and at sport, where notably, despite claims of devoting too much time to theory, he graced the local golf course, eventually playing off a handicap of eleven.

Following ordination in 1938, Stretch became curate at Holy Trinity Church, Aberystwyth, until undertaking wartime service with the Royal Army Chaplains Department (RACD). He was attached to the Army’s 11th Armoured Division, fighting its way into Germany from the Normandy beach-heads and in so doing, suffering the highest casualty rate in the British Army’s north European campaign.

On April 15th, 1945, British forces entered the horror that was Bergen-Belsen concentration camp, where they found an estimated 60,000 starving and diseased prisoners, as well as some 13,000 unburied corpses.  The BBC war correspondent Richard Dimbleby reported the scene in a, now famous, radio broadcast...

‘Here over an acre of ground lay dead and dying people. You could not see which was which... The living lay with their heads against the corpses and around them moved the awful, ghostly procession of emaciated, aimless people, with nothing to do and with no hope of life, unable to move out of your way, unable to look at the terrible sights around them ... Babies had been born here, tiny wizened things that could not live ... A mother, driven mad, screamed at a British sentry to give her milk for her child, and thrust the tiny mite into his arms, then ran off, crying terribly. He opened the bundle and found the baby had been dead for days. This day at Belsen was the most horrible of my life’

The prevention of even more disease necessitated the immediate burial of the typhus-ridden dead in a number of mass graves, with Jewish and Christian Army Padres joining together to pray over the burial pits. Stretch was one of these padres and he was recorded for cinema newsreel, in front of one of the open mass graves. Peering at the camera through thick-framed spectacles and with his hands firmly thrust into battle-dress pockets, he spoke briefly, but forcefully…

‘I am the Reverend T.J. Stretch attached as padre to the formation concerning this camp. My home is at Fishguard, my parish was at Holy Trinity Church, Aberystwyth. I’ve been here eight days, and never in my life have I seen such damnable ghastliness. This morning, we buried over 5,000 bodies. We don’t know who they are. Behind me you can see a pit which will contain another 5,000. There are two others like it in preparation. All these deaths have been caused by systematic starvation and typhus and disease, which will have spread because of the treatment meted out to these poor people by their SS guards and their SS chief.’

Stretch, as well as his other Army clerical colleagues, were urgently attentive to the surviving camp inmates. Paul Wyand, the Movietone News reporter who recorded Stretch talking in front of the mass burial pit, recorded that he ‘worked like ten men, distributing clothing, helping to feed the sick, spreading comfort, and holding services with his colleagues at the mass graves.’

Stretch was anxious that the awful truth about Bergen-Belson should reach as wide an audience as possible, ‘This is so ghastly a story that the whole world should know about it’, he wrote. Within a week of entering the camp, Stretch sent in his official report of events, signing and dating it ‘TJ Stretch C.F., Belsen Camp, April 22nd 1945’, he was anxious to state the truth of that which he had witnessed.

He dictated the report to his batman (Army servant), ensuring that several copies were made, one of which, was submitted to Stretch’s immediate superior, the Assistant Chaplain General, the Revd. JWG Steele, who, in turn, circulated it to all senior chaplains. Another copy reached the office of The Church Times, the London based organ of the Anglican Church and as such, widely read, mainstream Christian newspaper, who published it in late May.

With the coming of peace, Stretch returned to civilian life with his wife and daughter, serving as priest and Rural Dean in Lancashire. However, he maintained a strong link with the Army, as Senior Chaplain in the Territorial Army in Lancashire. He also maintained his love of golf and it was whilst playing in the 1973 final of the Clergy Golf Match, that he died of a heart attack.

Stretch, on completing his official report of his Bergen-Belsen experience pondered the question of whether he would be believed by his readers. He concluded that he would be, for…

‘…all I have written I have seen. And what I have seen, I shall never forget. Never.’

My grateful thanks to Diane Scupholme for her time.

VE Day 75: From the Church Times archive – ‘Camp of Death’ (2020, May 8), Church Times. Retrieved from https://www.churchtimes.co.uk/articles/2020/8-may/features/features/ve-day-75-from-the-church-times-archive-camp-of-death