Benjamin Noel Young Vaughan (1917-2003) was a bishop for more than forty years in the West Indies, and then back home in Wales.

Vaughan (who was always known as Binny Vaughan) was born in Newport, Pembrokeshire, on Christmas Day 1917. His father was an alderman in the town. He was educated at St David’s College, Lampeter, where he took a first in Classics and then at St Edmund Hall, Oxford, where he achieved a second in Theology. He completed ministerial training at Westcott House, Cambridge. After this he worked as a curate at Llannon, near Llanelli and then at St David’s, Carmarthen.

Vaughan’s next move was to the Caribbean. He spent the next four years as tutor at Codrington College, Barbados, the main centre of theological training in the West Indies. Some of the clergy he trained were to become bishops in the years following political independence from Britain. In 1952, Vaughan came back to St David’s College, Lampeter, to become a lecturer in theology. He was later made an honorary fellow of St David’s College.

His time in Lampeter was to be relatively short, however. He was called to be Dean and Rector of the cathedral in Port of Spain, capital of Trinidad and Tobago, in 1955. Then in 1961, he was appointed suffragan Bishop of Mandeville, in Jamaica; at the same time, he was also Archdeacon of South Middlesex and, for a time, Rector of Mandeville. 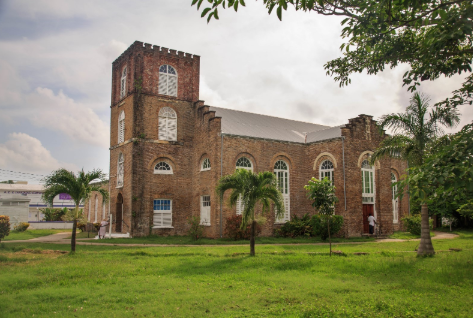 Vaughan became Bishop of British Honduras (now Belize) in 1967. He threw himself into the life of his small diocese, which was still recovering from the devastating effects of hurricane Hattie in 1961. Vaughan was chairman of the National Council for Education in British Honduras, of the Christian Social Council and of the Agricultural Commission of the churches. At the 1968 Lambeth Conference, he showed himself a committed ecumenist, who was concerned for social justice and for the poor. In all his work in the Caribbean, he understood how urgently the church needed to respond to the post-colonial world, if necessary through radical change. Out of this period came three books:- Structures for renewal (1967), Wealth, peace and godliness (1968) and The expectations of the poor (1972). He was theologically conservative.

Vaughan returned to Wales in 1971; there he became Dean of Bangor cathedral and an assistant bishop in the diocese. In 1976 he was appointed bishop of Swansea and Brecon. His new diocese covered the largest geographical area in England and Wales, extending from the Gower peninsula to the Black Mountains on the border with Herefordshire. Furthermore, the cathedral, in Brecon, was forty miles from the main centre of population in Swansea. Vaughan provided a focus of unity in the south of the diocese by establishing St Mary’s Swansea as a collegiate church, with a college of chaplains. Each of these chaplains had a particular area of responsibility within the diocese. Vaughan was also responsible for the founding of a family centre in Swansea, to serve deprived members of the community. In addition, he worked hard at the theological education of clergy and lay people.

Vaughan was President of the Council of Churches in Wales from 1980 to 1982. He was a member of the court of the University of Wales and of the Order of Druids, Gorsedd y Beirdd. After his retirement, he served as honorary assistant bishop in his old diocese.

Vaughan’s first wife, who he married in 1945, was Nesta Lewis; she died of cancer in 1980. About the time he retired, he married his former secretary, Magdalene Reynolds. There were no children of either marriage. Vaughan died on 5 August 2003. The Archbishop of Wales described him as ‘a larger than life figure who touched the lives of many people during his long and fruitful ministry.’

Obituary of the Rt Rev Benjamin Vaughan: Welsh bishop who helped Anglicans in the West Indies and Central America adapt to the post-colonial world. (2003, September 19). Daily Telegraph.  Retrieved from  https://infoweb-newsbank-com.ezproxy.uwtsd.ac.uk/resources/doc/nb/news/0FDB088E76808DA2?p=UKNB