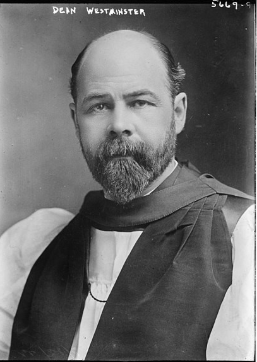 Herbert Edward Ryle (1856-1925) was the third principal of St David’s College, Lampeter. He went on to become bishop of Exeter and then bishop of Winchester.

Ryle was the second son of a clergyman; his father John Charles Ryle was eventually to be the first bishop of Liverpool. Ryle’s mother, Jessie Elizabeth née Walker, died when he was only three; he was brought up by a stepmother, Henrietta neé Clowes. Herbert was educated at Hill House, Wadhurst, Sussex, and then Eton College. He went up to King’s College, Cambridge, to study classics; having been injured playing football, he took an aegrotat degree in 1879. However, in 1881, he was awarded a first class in the Theological Tripos, having won all three prizes available, (Evans, Scholefield and Hebrew).

In April 1881, Ryle was appointed a fellow of King’s College. He was ordained deacon in 1882 and priest in 1883. Also, in 1883, he married Nea Hewish Adams, the daughter of Major-General Hewish Adams of the Royal Irish Rifles. They had three sons; sadly only one of these survived childhood.

Ryle was examiner at St David’s College, Lampeter, in 1885 and 1886. Then, in July 1886 and still not thirty, he was appointed Principal. Edward White Benson, the Archbishop of Canterbury, wrote to him, declaring ‘the fondest hope that the College will become a great mother of piety, and that her theology will be a living tenant and witness of the soul, and not of the mind only.’ Although Ryle was the first English principal, he showed greater respect for Welsh traditions than his two predecessors, Llewelyn Lewellin and Francis John Jayne. He chaired meetings of the College Board with tact and humour, was responsible for remodelling the honours course in Theology, and initiated some reforms in the college’s financial administration. T.F. Tout, the professor of English and History, said of Ryle ‘His earnestness, sincerity, and deep religious sense, made him a real spiritual and moral force … He was most attractive in all the lighter relations of our little society, - kindly, conciliatory, tactful and helpful.’ Ryle’s most radical idea was his plan to establish a hall of residence for women students to come to Lampeter. However, he did not remain in Ceredigion long enough to achieve this.

In March 1888, Ryle went back to Cambridge to become Hulsean professor of divinity there. His main field of interest was in the Old Testament. Working within the tradition of liberal Anglican scholarship, Ryle presented the results of continental critical scholarship, particularly the work of Julius Wellhausen. He was said to have drawn ‘the minds of thinking men to realise that the historical study of the Old Testament, so far from upsetting faith, was its only safe intellectual background.’ He was also a popular and approachable lecturer.

As Hulsean professor, Ryle was expected to publish some of his lectures. With Montague James, he published a translation of Psalms of the Pharisees, commonly called The psalms of Solomon, (Cambridge University Press, 1891). One hundred and twenty years later, this is still in print. Ryle’s next book was The canon of the Old Testament: an essay on the gradual growth and formation of the Hebrew canon of scripture, (Macmillan, 1892). The review in The Athenaeum described it as the most accurate and readable attempt at a history of the Hebrew Canon so far published in English. Also, in 1892, Ryle published The early narratives of Genesis, (Macmillan, 1892), dealing with the first eleven chapters of Genesis and pointing out the influence of Babylonian mythology on them. Ryle also edited Ezra, Nehemiah and later Genesis in the Cambridge Bible for Schools. He published Philo and Holy Scripture (Macmillan) in 1895.

Ryle was elected president of Queens’ College, Cambridge, in 1896; after this he found little time for writing. Then, in December 1900, Ryle was appointed bishop of Exeter. He was popular in his diocese, but his time there was to be short. Just over two years later, he became bishop of the large and complex Winchester diocese. In his new role, he directed a thousand clergy and controlled the patronage of 140 livings. However, he had been greatly overworked in both dioceses; in January 1904 he suffered an attack of angina pectoris, followed by appendicitis. His convalescence was slow. He also alarmed high church men in his new diocese by forbidding certain ritual practices.  However, he gradually gained people’s confidence and his eventual departure was regretted all over the diocese.

At the end of 1910, handicapped by a lame foot, Ryle reluctantly decided to move to a less demanding post. He was installed as dean of Westminster just before the coronation of George V. The years to come were to be among the most fruitful of his career. During the First World War, he was responsible for the many special services held. His sermons were carefully prepared, simple in form and direct in style. Archbishop William Temple commented that he had never ‘heard such exquisitely beautiful preaching of the simple Gospel.’

Ryle realized that Westminster was the natural scene of great national rites. When the war was over, he changed its ceremonial style to reflect the needs of the bereaved country, with its renewed interest in pageantry and symbolism. In particular, he advanced David Railton’s idea that an unnamed British soldier should be buried in the abbey. The gravestone over the tomb of the Unknown Warrior is inscribed with Ryle’s words, ‘a British warrior unknown by name or rank.’

It was whilst Ryle was dean that royal weddings were moved to Westminster Abbey and became public events. He helped officiate at the marriage of the future George VI and Elizabeth Bowes-Lyon.

In 1920, he launched the first public appeal to raise money for the maintenance of the abbey’s buildings. £170 000 was given to the Dean Ryle fund, to be used for the repair of the abbey’s stonework.

Ryle was appointed knight of the Royal Victorian Order in 1911.

Never robust, he had a history of heart trouble. His health broke down in the Autumn of 1924. He died at the deanery on 20 August 1925. He is buried in the nave of Westminster Abbey, near the tomb of the Unknown Warrior.