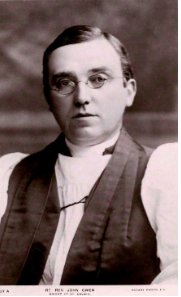 John Owen (1854-1926) was professor of Welsh at St David’s College Lampeter and later principal. He left Lampeter to become bishop of Saint David’s.

Owen was born at Ysgubor Wen, Llanengan in Caernarfonshire. His father, Griffith Owen, was a weaver who rose to be a wool merchant. His mother was Ann née Jones. The family was religious; Griffith Owen was a deacon for many years at the Bwlch Calvinistic Methodist chapel in Llanengan.  Owen attended the British School at Llanengan and then Botwnnog grammar school. When he was only fifteen, his headmaster appointed him assistant master, giving him the chance to prepare for entry to university.

Owen was awarded a mathematical scholarship at Jesus College, Oxford, in 1872. He later commented that the atmosphere of the college in those days was ‘a Welsh atmosphere.’ To Owen’s great disappointment, he graduated in 1876 with only a second-class degree. By this time, he had started to leave his early chapel allegiance.  Even while he was teaching at Botwnnog, he had started to attend the local parish church. Then at Oxford, he was influenced by A.M.W. Christopher, the rector of St Aldates. Leaving university, he considered ordination but decided to teach for a few years first. His first post was as assistant master at Appleby grammar school in Westmorland. At this time, he met and married Amelia Longstaff; they went on to have four sons and six daughters.

In 1879 Owen returned to Wales to become professor of Welsh and lecturer in Classics at St David’s College Lampeter. He was confirmed and ordained that year, before being priested in 1880. Price comments that he may have been the most thoroughly Welsh teacher who ever taught at Lampeter. Indeed, he was always more at home in Welsh than in English. During Owen’s time in Lampeter, the study of Welsh achieved a stronger position, with emphasis on Welsh history and culture, on translation to and from English and on sermon preparation. However, it was difficult to include Welsh as a subject for the B.A. degree, as the external examiners from Oxford and Cambridge did not speak it. It was only in 1888, after Owen had moved on, that Welsh became an optional element of the pass degree. During his time at Lampeter, Owen became known as a champion for the Welsh church. He took part in the ‘Church in Danger campaign,’ arguing for the continued status of the Welsh Church as an established state church.

Owen was appointed warden of Llandovery College in 1885; his role there was more overtly to encourage the institution’s Welsh traditions. He still kept in close touch with Lampeter, as he was external examiner in Welsh. However, his stay at Llandovery was to be short. In 1889, A.G. Edwards, the bishop of St Asaph and Owen’s predecessor at Llandovery, invited him to join him as dean. Owen was to be described as ‘the controversial dean of a militant bishop.’ The church was facing the threat of disestablishment, as well as great resentment over tithes, paid to the Church of England even by nonconformists. Owen sought to separate the two issues, and to win over opinion in England. He also became more and more involved in education; it was said of him that he showed almost as much zeal for the interests of national education as for those of his own church. In particular, he was nominated to serve on the charter committee of the University of Wales, formed in November 1891.

Again Owen’s time as dean was short. In 1892 he was appointed fifth principal of St David’s College Lampeter. His energy there was astounding; it was said that no man was ever better suited to the work. Timothy Rees was later to comment that ‘his impact was felt by all the students. It impressed the keen and terrified the slackers. Even to see him striding across the quad on his way to lectures, with his cap askew and his gown awry and the inevitable pile of books stacked under his arm, was like watching an army going over the top.’ A well as leading the college, Owen lectured in New Testament and in general Theology.

At this time, Owen fought a long but unsuccessful battle for Lampeter to be included in the University of Wales, along with the colleges at Aberystwyth, Bangor and Cardiff. For him, the college conferred degrees under royal charter, so it was unthinkable that it should be excluded. However, the supporters of the University of Wales argued that St David’s College had been founded as a theological college to train young men for the ministry. It should be treated as any other denominational college, therefore. Owen petitioned the Privy Council, declaring that ‘We do not oppose a University of Wales. On the contrary we are in favour of it, and this College has repeatedly expressed its willingness to co-operate in the Welsh University movement, but it should be a University of Wales in fact as well as in name … ‘ He argued that Lampeter taught subjects other than theology, and imposed no religious tests of opinion. After the petition was refused, Owen met the prime minister, W.E. Gladstone, at Hawarden in the summer of 1893. Gladstone agreed to insert a clause in the charter of the University of Wales, permitting the number of colleges to be increased. It might be possible for St David’s College to enter at some time in the future, therefore. Owen secured a new charter for the college at Lampeter in 1896. This established a college council and affirmed that the institution had been set up to ‘receive and educate any person whatsoever, whether destined for Holy Orders or not.’

In 1897, Owen was appointed Bishop of St David’s, at that time the largest diocese in England and Wales. Daniel Parry-Jones said of him, ‘He was the most truly, typically, Welsh of all the Bishops Wales has ever had: a block of Welshness hewn from the solid rock of that Pre-Cambrian range that outcrops in the north.’ Owen gained a reputation as a ‘battling bishop,’ but he was also a skilled negotiator. In the long conflict over disestablishment, he gathered a mass of information so the Church could present its case in the best way possible. He became its leading spokesman, speaking at eighty public meetings in the first half of 1912. After the act was passed, he helped deal with the practical problems of organizing the new Welsh province. Towards the end of his time as bishop, he secured the creation of the new diocese of Swansea and Brecon, with the old priory church at Brecon becoming a cathedral.

Sadly, Owen’s bishop’s palace at Abergwili, just outside Carmarthen, was largely destroyed by fire in 1903. Although his family escaped, the cost of rebuilding it left Owen heavily in debt. The associated pressures triggered a significant decline in Owen’s health. He had always suffered from nervous exhaustion associated with overwork and too little exercise. Now he experienced a breakdown, meaning that work became impossible. Ill health remained an issue for the rest of his life. In the summer of 1926, he told a friend ‘I am taking off my armour.’ He died in London in November 1926, and was buried in Abergwili. There is an effigy to him in the cathedral at St David’s.