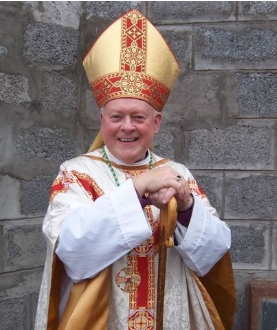 Born in Cardiff, Richard's early education was at the Church School in Llandaff. After failing the 11+ convincingly (!) he eventually went to Canton High School, and then proceeded to Lampeter - a place he always loved with a passion. Indeed much later he was on the University Council for 10 years. He graduated BA in 1966.

Reading Theology at Fitzwilliam College, and Ridley Hall Cambridge, he was ordained in 1968 - becoming curate of Skewen, and then St Augustine's Penarth. Meanwhile, he continued his studies, especially Music. Following Fellowships at the London College of Music (Organ) and Trinity College, London (Composition), in 1979 he took the Mus.B degree at Trinity College, Dublin. He followed this with the University of Wales MA (thesis on Sir John Goss at St Paul's Cathedral) studying under the enormously respected teacher Canon William Price at Lampeter. He then took a PhD in Church History ("The Free Church of England, c 1845 - c 1945"), again with Dr Price.

Music was always of great importance. He studied organ under the distinguished Welsh blind organist David Williams, and the twin loves of ministry and music took him on from his curacies to Rochester Cathedral and then St Paul’s Cathedral, London. As Succentor of St Paul's he was responsible for constructing all major services - amongst them the Queen Mother's 80th Birthday Thanksgiving, and the Royal Wedding of 1981. He then spent 8 very busy years as Vicar of Ruislip, and following this moved to be Canon Precentor and Sub-Dean of Guildford Cathedral. In 1997 he was appointed Dean of Monmouth - and also Vicar of the Cathedral Parish in Newport. Again, at this time, from 1997 to 2011, he was both Chair of the Welsh Liturgical Commission, and Warden of the old-established Guild of Church Musicians.

In 2011 he was elected Bishop of St Helena by the Anglican Church of Southern Africa, and was consecrated at St Mark’s Cathedral, George (Western Cape). He and Jane spent 7 years in that fascinating and mountainous South-Atlantic diocese ... Napoleon's house at Longwood is only one of so many wonderful places to explore. Again, Ascension Island was a part of his diocese. But he also made many trips to South Africa for the Synods, and travelling was a real adventure, for until 2017 the only connection was the elderly Mail Ship ... which took 5 days to the Cape (or 8 when one engine occasionally broke down!).

Music remains close to heart. Amongst some 150 solo organ concerts over the years, he has twice performed at St Paul’s Cathedral London. He has also done recitals at the Cathedrals of Rochester, Guildford, Coventry, Bangor, Newport, Newcastle on Tyne – and 6 times at St Paul’s Cathedral, on St Helena. Again, he has given 6 Recitals on the Lampeter Chapel Organ at the Annual Reunion.

Following retirement from St Helena he and his wife Jane (a Dental Surgeon) now live in his family home in Llandaff. Richard continues doing services and preaching Countrywide - again, he does a lot of playing, although the C19 pandemic wiped out his concerts for 2020. But as he says, "thankfully Jane and I are still here when so many have tragically left us!"

In 2019 he was elected Master of the Guild of Musicians and Singers in London. Honorary Fellows of the Guild include Rick Wakeman, Dame Patricia Routledge, Dame Mary Archer, and the late (and much loved) Dame Vera Lynn. So there's a lot to do, and thankfully he's kept very busy!