George Bernard Austin (1931-2019) was archdeacon of York, famous or infamous as an arch-traditionalist and a go-to figure for journalists in search of a quote.

Austin came from Bury, Lancashire; his father Oswald owned a tobacconist’s shop. His mother was named Evelyn. Austin’s home life was marred by his domineering grandmother, who he thought was a witch. He attended St Chad’s Church School and then Bury High School, where he became school captain. As a teenager, Austin started attending his local Anglican church and, in due course, was confirmed. After leaving school, he entered the Royal Air Force for national service. However, a medical showed traces of a concealed form of tuberculosis; he was quickly discharged.

Austin’s next destination was St David’s College, Lampeter, where he took a degree in philosophy. He commented on his time there,

‘I loved West Wales … You weren’t allowed any women in your room – not even a sister. This didn’t stop fraternising with local girls and I think half the clergy wives in Wales are probably Lampeter girls. I discovered I needed to go to Mass every day and this made me a catholic. Evangelical friends prayed for my conversion and this made me even more catholic. I owe the Society of St David (now the Anglican Society) a great deal and have been very grateful for friends from those days like Noel Jones (now Bishop of Sodor and Man). I made my first confession there …’

After Lampeter, Austin went on to Chichester to prepare for ordination. His first post, an unhappy one, was at St Peter’s Chorley, in the diocese of Blackburn. In 1957, he moved to St Clement’s church in Notting Hill. The next year tensions between members of the white working class and the new African Caribbean population broke into riots. The Church Times asked Austin for a 1500 word article on his work in the area; thus began his long involvement with the media. He was to go on to establish a substantial reputation as a broadcaster and writer.

After this, Austin spent a year working as a chaplain at London University, but managed to fall foul of the senior chaplain. He then took up a curacy at Dunstable Priory, where he spent three happy years. He married Roberta Thompson, (Bobbie), in 1962; he proposed to her only six days after their first meeting!  They had one son, Jeremy. After Dunstable, his next posts were at Eaton Bray in Bedfordshire and then at St Peter’s, Bushey Heath, Hertfordshire, where he stayed eighteen years. 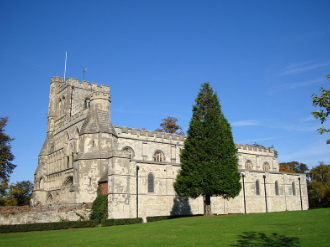 In 1970 Austin was appointed to the General Synod; he quickly became a leading spokesman for the Anglo-Catholic element fighting a long rear guard action against the prospect of change.  He became a Church Commissioner in 1978, a member of the Standing Committee in 1985 and subsequently of the Crown Appointments Commission. However, when he failed to win higher promotion, he became convinced this was because of his opposition to women clergy and his denunciations of theological liberalism.

Austin was appointed to a village church St Leonard’s, Flamstead, Hertfordshire in 1988. However, shortly afterwards, the archbishop of York, John Habgood invited him to become archdeacon of York and a canon of York cathedral. This was certainly generous as only a short time before, Austin had told a television interviewer that Habgood was unsuitable to become archbishop of Canterbury! Rumours circulated that it was an attempt to silence Austin! He and Habgood were to remain on good terms, despite having some very public disagreements. However, Austin’s new appointment meant that his public exposure increased dramatically. One journalist commented that ‘Getting an opinion out of George Austin is like getting blood out of an artery.’

In 1991, Austin preached at York Minster a sermon in which he coined the term ‘liberal agenda.’ He spoke of an attempt to set up ‘a substitute faith and morality which can never satisfy us.’ He suggested a plan for limiting the damage by formalising the division between traditionalists and liberals. Habgood said Austin reminded him of the fat boy in Dickens’ Pickwick Papers who wanted to make people’s flesh creep.

Austin hated the decision to ordain women; he saw this as part of a liberal package, including homosexual rights, same-sex marriage and a general lessening of the concept of sin. He also believed that as it was impossible for a woman to be a priest, no woman could ever be called to the priesthood. In 1993, just after the Princess and Princess of Wales had separated, he told BBC’s Today programme that Prince Charles was unfit to be king. ‘Having almost immediately broken his wedding vows, how would he be able to go into Westminster Abbey and make coronation vows?’, he asked. On this occasion, George Carey, the archbishop of Canterbury, accused him of practising ‘megaphone theology'.

Austin enjoyed the work of an archdeacon and was conscientious in visiting the parishes. However, in the end, his extreme opinions started to interfere with his responsibilities, as invitations to him to visit churches reduced and the other two archdeacons felt he could not represent them on General Synod. In February 1999, he decided that he would ‘retire and shut up.&rsquo

The Times. (2019, February 16). The Venerable George Austin – outspoken archdeacon with a weakness for fine food who declared ‘jihad’ against liberals and opposed any move to modernise the Church of England. The Times.  Retrieved from https://infoweb-newsbank-com.ezproxy.uwtsd.ac.uk/resources/doc/nb/news/171A71235E7C94A8?p=UKNB