Robert was born in Fishguard, Pembrokeshire on 9th February 1869. He attended Fishguard Grammar School before joining St David’s College in 1889, where he achieved a 2nd class classical degree. He held curacies in Newport, where he married his wife Florence Mary, as well as Liverpool and Howden in Yorkshire. He was invited in 1904 by Bishop Mercer to become rector of New Norfolk, Tasmania.

Two years later he was appointed Diocesan Missioner and Rural Dean, Archdeacon of Darwin and Rector of Zeehan, 1911-1915, Rector of Queensland, 1919-1921, Rector of Wynyard, 1921-1923 and finally Archdeacon of Hobart in 1923. As Archdeacon of Hobart Thomas was responsible for several churches and regularly conducted five services every Sunday. He was also editor of the Church News, sat on various committees and held several positions within the Masonic organisation, including Chaplain of the Tasmanian Naval and Military Lodge.

Always immensely popular particularly amongst the miners, he was present at Mt Lyell copper mine in 1912 when the pump house caught fire causing the deaths of forty-two men. His heroic services during the disaster earned him a special recommendation.

In 1914 Robert was one of the first four chaplains appointed to the Australian Imperial Force. As chaplain with the third brigade he left Hobart on the 20th October 1914 on the S.S. Geelong, with 912 soldiers bound for Egypt. He served in Egypt on Gallipoli, in France and at the Australian headquarters at Horseferry Road in London, which had relocated from Cairo in 1916. 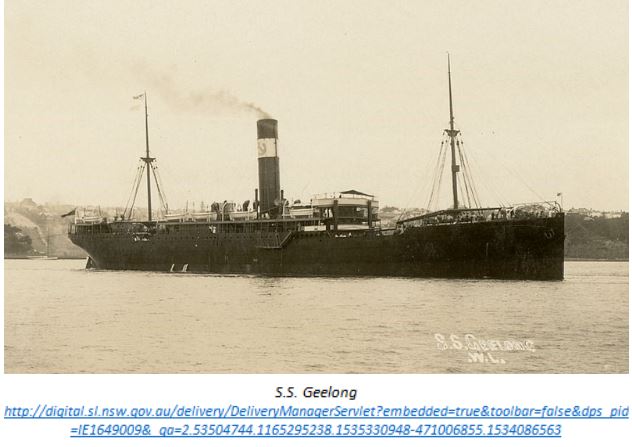 In a newspaper interview with The Mercury on his return to Hobart for recuperation in 1916, Robert recounted some of his war time experiences;

“…our men were trained to a nicety; they called forth the admiration of the other British forces in Egypt, and were declared the finest lot of soldiers they had ever seen. Our brigade took part in the formal ceremony at Cairo of annexing Egypt under General Maxwell. Our brigade was also chosen to provide the first landing party on the Gallipoli Peninsula under Brigadier-General Sinclair Maclagan, which was accounted a great honour. No words of praise can be regarded as fulsome with respect to that splendid soldier - one of the finest officers in command. Before the now historic landing; we were conveyed to the island of Lemnos, where the forces were trained for weeks in road marches, scaling heights, and so on, to keep them fit, other troops from Egypt gradually joining us. My duty was to visit a certain number of ships, conduct services, attend the base hospitals, and do pastoral work in a general way. Up to the time of the notable landing at Gallipoli the health of our troops was excellent. Whilst in Egypt two or three of our brigade died from different causes, but not one Tasmanian, and on the whole, had a happy time.”

Robert himself had several narrow escapes and was hit by shrapnel in the lobe of one of his ears and on another occasion was so close to the trajectory of a shell that it grazed one of his legs.

Robert Henry Richards died on October 11th 1929 and was buried at Cornelian Bay Cemetery.  The Advocate reported that his funeral was well attended and included the Premier Hon. J.C.M. Phee and the State Commandant Lieut-Colonel H.F. Cox Taylor D.S.O. In his address Bishop Hay remarked that Archdeacon Richards was “loved by the miners of the West Coast and by his parishioners at Wynyard, and other districts” and that “He would always be remembered by the boys who fought on the battlefields of Gallipoli and France.” His coffin was covered with the Union Jack and the Last Post and Reveille were sounded.

Archdeacon Richard’s Return. Experiences at the Dardanelles. Our Brave Tasmanians. (1916, January 6). The Mercury, Retrieved from  https://trove.nla.gov.au/newspaper/article/1058671