Evans was born in Narberth, the son of Eric Evans and his wife Florence née Rogers. He was christened Thomas, but always known by his middle name, Eric. On leaving school, he studied for a BA at St David’s College, Lampeter, and then for an MA at St Catherine’s College, Oxford. He then prepared for the priesthood at the Anglo-Catholic St Stephen’s House, still in Oxford. He was ordained deacon in 1954 and priest in 1955.

Evans’ first clerical post was as a curate in Margate. While he was there, he met and married Linda Budge; they went on to have two daughters.  In 1958, Evans became senior curate at St Peter’s, in the centre of Bournemouth.  During his time there, he trained as a Samaritan and became founder and first director of the Bournemouth branch. He also got on well with young people. In 1962, he moved to the diocese of Gloucester as youth chaplain. It was said he could sit in a field with a glass of beer and, at the same time, explain clearly to the young people round him St Paul’s theology of the redemption. He became diocesan canon missioner in 1969 and then archdeacon of Cheltenham in 1975. These roles meant he lived in the Close at Gloucester for nineteen years; he loved the cathedral, city and diocese.  While there, his roles included being a governor of Cheltenham Ladies’ College, a chaplain to the Air Training Corps, the Gloucester College of Education and the Gloucestershire Constabulary. In 1981, he became chairman of the Council for the Care of Churches. Despite the threats of theft and vandalism, he was a strong opponent of keeping churches locked up. He believed that ‘Our churches are in a sense sacramental. They are an outward and visible sign of God in our presence. People need an awareness of the numinous, and visit churches simply because they are different from other buildings.’

His appointment as dean of St Paul’s Cathedral in 1988 came as a surprise to some. It was rumoured  to have been the work of Margaret Thatcher, who had not forgiven the previous regime for the tone of the Falklands thanksgiving service of July 1982. However, the Chapter at St Paul’s was not a particularly happy or united team. Evans brought the gifts of a pastor and peacemaker. It was said that during his time there, peace broke out and there was a greater charity and unity among the Chapter than at any time in living memory. He was fortunate that three of the four Canonries became vacant just after his arrival, putting an end to most of the notorious backbiting. However, it was said that Evans’ own gentle style created harmony. For instance, he encouraged members of the cathedral community to have lunch together, believing that those who shared meals were less likely to quarrel. At Chapter meetings, he tried to achieve consensus; only very rarely would anything come to a vote.  He worked for the conservation and adaptation of the cathedral’s fabric. Financially, it was almost bankrupt. In 1991, it was forced to take the controversial step of charging visitors for entry, one of the first cathedrals to do this. 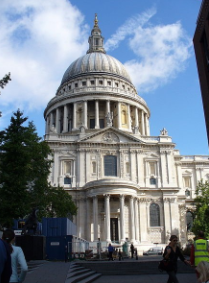 Evans fitted in well with the City of London. As a fine after-dinner speaker and a prominent Freemason, he was well-suited to civic events and livery dinners. He was appointed chaplain to the Guild of Freemen and annually conducted the brief Blessing of the Lord Mayor, which happens during the Lord Mayor’s Show. He was made an Honorary Freeman of the Worshipful Company of Gardeners in 1992. In contrast, the deanery was a welcoming place for all; it was said that Evans’ wife, Linda, made 200 cups of tea a week for beggars who knocked at the door.

Evans was an Anglo-Catholic traditionalist, strongly opposing the ordination of women. He argued that ‘The Church of England should not go it alone on the issue of women priests.’ However, his loyalty to the Church of England never wavered. He said, ‘If we are to keep the Church of England together we need more love and prayer, not to have a go at each other.’ He was also conservative in his politics and a member of the Carlton Club. In particular, he was a strong supporter of the monarchy, arguing that ‘the oldest continuing human constitutional organism in the world apart from the papacy’ demanded respect. In his post he forged close links with the Royal Family, and was involved in organising nationally important services, for instance commemorating the fiftieth anniversary of VE Day. In 1996, Evans was made a knight of the Royal Victorian Order, an honour in the personal gift of the Queen.

Also, in 1996, ill health forced Evans to resign, two years before his possible retirement age of seventy. Sadly, he died in his sleep on August 17, six weeks before he was due to finish work. Canon Michael Saward commented ‘For many years he had suffered from arthritis, he’d had a long-standing chest complaint and he had been on an oxygen supply on and off for the last three months.’ Evans’ funeral was held in Gloucester Cathedral, followed, two days later, by a service of thanksgiving in St Paul’s. In a personal message to his wife, the Queen wrote ‘He will be a great loss to the Church and his many friends.’