William Peregrine Propert (1831-1906) was associated with St David’s Cathedral as chorister, lay vicar-choral and organist for over sixty-five years.

Propert was born at Hubberston on 24 February 1831. His father was Captain David Propert, the harbourmaster at Milford, and his mother, Ann Peregrine.  He attended the Cathedral School at St David’s. As a child he possessed a fine treble voice, singing the solos in the anthems used at services. He also learned to play the organ. His first move was to St David’s College Lampeter. He was Bates Scholar and college organist, taking two prizes in 1849. He was also at the centre of a small group who met every week for musical study.

In 1851, Propert was appointed Junior Lay Vicar and Organist of St David’s Cathedral; he retained this post until 1871. However, he was able to go on studying alongside.  He was the first student to gain a combined degree in Arts and Music at Oxford University. He went on to Cambridge to study theology, classics, law and mathematics, in addition to music. He married Emily Mortimer in 1859. They had two sons, M.D. Propert, who became a Local Government Board official, and Peregrine Sydney Goldwin, a London vicar. 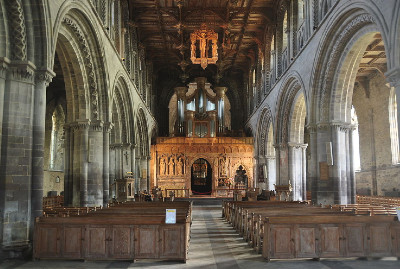 Propert was organist at St David’s until 1883, and then lay vicar choral. However, the building was being restored between 1864 and 1883, so the organ was not used. Propert appears to have had plenty of time for his abundance of other interests.  His friends included the composers Thomas Attwood Walmisley, Sebastian Wesley, Sir George Elvey and Dr Corfe.

In another sphere, he became a member of the Inner Temple and, in 1873, took his LL.M. at Cambridge. He was called to the Bar in 1873 and took his LL.D. in 1878. Although he never practiced law, he acquired a great reputation throughout South Wales as a legal adviser. He was chosen by the Japanese government to act as tutor to two young Japanese who were sent to Britain to be trained in English and Roman law. He was a member of the Royal Meteorological Society and, over thirty years, he carried out a series of meteorological observations at St David’s. These were published and declared to be of national value. He was a member of the Royal Geographical Society, alongside interests in botany, geology and entomology.

The Times. (1906, October 5). Obituary. The Times. 5 October 1906. Retrieved from https://go-gale-com.ezproxy.uwtsd.ac.uk/ps/retrieve.do?tabID=Newspapers&resultListType=RESULT_LIST&searchResultsType=SingleTab&searchType=AdvancedSearchForm&currentPosition=129&docId=GALE%7CCS151450437&docType=Obituary&sort=Pub+Date+Forward+Chron&contentSegment=ZTMA-MOD1&prodId=TTDA&contentSet=GALE%7CCS151450437&searchId=R3&userGroupName=walamp&inPS=true&ps=7&cp=129