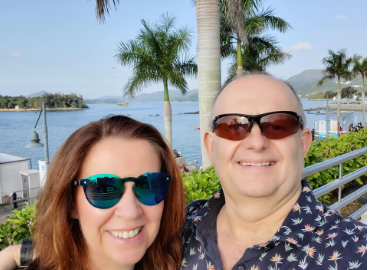 Newman was born in Folkestone and grew up in Hythe, Kent. His family ran a chain of furniture shops as well as a house removal company, (all named “Newman and Sons”). His mother worked as a cook in one of the local pubs. Trevor attended Harvey Grammar School in Folkestone. He was a senior prefect there, as well as representing the school at football and rugby union.

He was the first member of his family to go to university, arriving at St David’s University College in 1982 to study geography. This was a dynamic time for the subject at Lampeter; Newman’s lecturers included Mike Walker, Dave Kay, Dave Kirby, Paul Cloke, John Dawson and Rob Page. Away from studying, he represented the college at both football and hockey, (full back in the first of these and goalkeeper in the second).  His nicknames were Blimp (always chunky) and Elder Lemon (after the colour of his goalkeeping shirt).

Newman’s years at Lampeter strengthened his ambition to become a teacher. However, he was reluctant to do a PGCE immediately, without first having experienced life outside of education. He therefore spent three years working in London as a design draughtsman. After that, he was offered redundancy, as his department relocated to Sheffield. He took the opportunity to do teacher training, (as he had always planned). He entered Swansea University in 1988, qualifying as a teacher the next year. His main subject was geography, with physical education as the subsidiary.

Newman’s first post was at a rural school in the middle of the Norfolk Broads. He remembers a tourism lesson, where he told year 10 pupils, “Hands up those that have been on holiday overseas.” He discovered that four of the class had never visited Norwich, only eighteen miles away! He also learned to play Tchoukball, (an indoor team sport invented in the 1970s and containing elements of handball, volleyball and basketball). Newman represented Great Britain at a tournament in Switzerland, as well as captaining Wales in the first Wales v England international, played at the Ebbw Vale Garden Festival in 1992. Two other Lampeter alumni were also part of the Welsh side that day.

His next role was back in Wales, at a Catholic high school in Pontypridd. He stayed there for the next nine years; it was also at this time that he met his wife Lynda. Stuck in a motorway traffic jam, one wet evening in 1999, Lynda commented that they were stuck in a bit of a rut. Maybe they should try to do something a little different. The next year they moved to St Andrews International School, Blantyre, Malawi, for Trevor’s first international teaching role. The geography was spectacular; he remembers ‘field trips on top of 1500 meter plateaus and lessons interrupted by lightning strikes.’ Sadly, the collapse of the Malawi economy meant that the Newmans were forced to return to Britain after one year. However, by then the travel bug had been well and truly sown.

After spending a year teaching in Kettering, in the English Midlands, Newman’s second overseas post was in Kuwait, at the English School Fahaheel. This one was to be very brief, cut short by the second gulf war. Newman worked next in Yeovil, before moving to Germany to be head of the geography department at the Berlin British School, an international school offering a British education. In this role, he became a teacher and advocate of the International Baccalaureate.

In 2006 Newman moved back to Africa, to teach at the International School of Moshi on the lower slopes of Mount Kilimanjaro. His first field trip was to Tarangire National Park; he remembers waking up to an overnight lion kill 50 metres from his tent. He moved back to Europe in 2008, to become head of humanities at St Dominic’s International School, Lisbon.  Three years later, he moved to Renaissance College, Hong Kong; the school had been founded five years before to serve the needs of local and expatriate communities. As well as teaching, Newman was able to run trips to Bali, watch copious amounts of rugby sevens and explore just about all of South East Asia. He celebrated his fiftieth birthday by walking the Inca trail in Peru.

He left Hong Kong in 2020; his next destination is to be Bangkok, where he has been appointed to the post of Head of Geography and Global Politics at St Andrews International School. He remarks that everything he has done in his career has been possible because of the quality of learning and inspiration he received studying in the geography department at Lampeter.