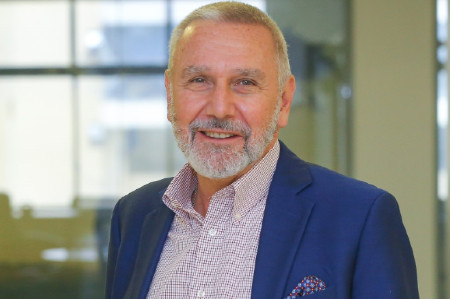 Lawrence Pintak is an award-winning journalist and scholar; he has reported from four continents, and from 18 African countries and 15 Arab states. He has been described as the foremost chronicler of the interaction between Arab and Western media.

While he was still at school, Pintak watched Dean Brelis reporting from the Golan Heights for CBS News. Pintak quickly realized that this was what he wanted to do with his life. He was educated at Medill School of Journalism, Northwestern University, from 1973 to 1976. He then moved to American University in Washington DC; he graduated with a BA in Communications in 1979. In the late 1970s, he also wrote numerous articles about southern Africa for The Times, including reporting on Zimbabwe’s war of independence.

Pintak became Middle East correspondent for CBS news in 1980. Based in Beirut for this role, he covered the birth of modern Islamic terrorism, including the rise of Hezbollah and the beginning of suicide bombing. As members of the media were the last Americans left there, they became targets for kidnappers. Death threats from a pro-Syrian militia forced Pintak to leave Lebanon for a year. Some of his crew were killed or crippled and several of his friends were taken hostage. Pintak described his experience in his first book, Beirut outtakes: a TV correspondent’s portrait of American encounter with terror, (Lexington Books / DC Heath and Company, 1988). He presented Lebanon’s disintegration in vivid vignettes, resembling twenty- or thirty-second TV spots. Nakhleh described the book as offering a ‘knowledgeable and informative synoptic view of all the major elements of the Lebanese tragedy.’

In 1988, Pintak became managing director of Pintak Communications International, a media consulting firm based in Washington D.C. and in Jakarta. He covered the Indonesian revolution of 1998 for ABC news and The San Francisco chronicle. It was also in Indonesia that he met his wife and his children were born. He went on to work as editor at Worcester Publishing from 1998 to 2000 and then as editorial director of Office.com for a short time. Following this, he entered academia as communications director of the Center for Social Change at Havard University. He next spent two years as Howard R. Marsh Visiting Professor of Journalism at the University of Michigan.

Pintak returned to the Middle East in 2005 to become director of the Kamal Adham Center for Journalism Training and Research at the American University in Cairo. Founded in the mid 1980s, this was then the largest training centre for journalists in the Middle East. As part of his role, Pintak was founding publisher of the important online journal Arab media & society. Around the same time, he studied for an M.Phil and then a PhD, awarded by University of Wales Lampeter. His PhD thesis was entitled Islam, nationalism and the mission of Arab journalism: a survey of attitudes towards religion, politics and the role of the Arab media in the twenty-first century.

In 2009, Pintak moved back to the US to become founding dean of the Edward R. Murrow College of Communication at Washington State University. During his time there, the college was able to secure several prestigious grants and awards, including new partnerships with the Department of State and The Carnegie-Knight Foundation. He also hosted The Murrow Interview, a series of broadcast conversations with leading figures in international affairs and global journalism. In addition, Pintak was an advisor to the US State Department on the American funded Center for Excellence in Journalism, at the Institute of Business Administration, Karachi. He developed the first professional journalism master’s degree in Pakistan, as well as advising journalism schools in tribal areas of the country.

Pintak became Dean of the Graduate School of Media and Communications at Aga Khan University, Nairobi, in 2020. He commented that he aimed to help the young programme broaden its footprints across East Africa and beyond.

Following Beirut Outtakes, Pintak has written four more books, all dealing with the interaction between Arab and western media. In The New Arab Journalist: Mission and Identity in a Time of Turmoil, (Bloomsbury, 2010), he examined how Arab media professionals viewed themselves and their role at a critical time. He was able to use direct interviews with many reporters and editors, as well as the first wide cross-border survey of Arab journalists. He described how these journalists remained under siege as governments still attempted to manage the message. Sabry saw the book as able, generous and important, marrying theory and practice in an admirably rich fashion. Pintak’s most recent volume is America & Islam: Soundbites, Suicide Bombs, and the Road to Donald Trump (Bloomsbury, 2019). He examined the United States’ relationship with Islam, seeing Trump as a symptom of decades of misunderstanding of the Muslim world. Pintak punctured key stereotypes that have shaped American’s perceptions of the world’s Muslims. Hurd described it as an important and timely book. It was one of the six finalists in the 2020 Religion News Association book award.

Pintak was made a Fellow of the Society of Professional Journalists in 2017 for ‘outstanding service to the profession of journalism’ around the world. He received the Senior Scholar award from the Association for Education in Journalism and Mass Communication in 2019.  He has won two Overseas Press Club awards, as well as twice being nominated for international Emmys.