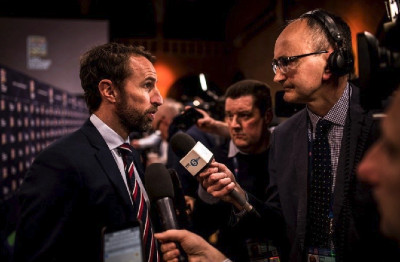 Murray grew up on a remote hill farm in Northumberland; the family property straddles Hadrian’s Wall. He attended school in Newbrough, Haltwhistle and Haydon Bridge. He played a variety of sports – rugby union and cricket, as well as football. He remembers, as a sixth former, staying in Leeds to watch a test match at Headingley. By chance, he met one of the Test Match Special production team, who introduced him to the legendary commentator, Christopher Martin-Jenkins. CMJ advised him to play as much sport as he could and to gain an understanding of how sport works and how sport is played. Around the same time, Murray did his work experience at the Hexham Courant.

Murray studied geography at St David’s University College, Lampeter, between 1985 and 1988. Alongside academic work, he was heavily involved in the football team, serving as joint secretary for two years as well as playing in goal. Thinking of his future career, he wrote regular reports of their matches for the Cardigan and Tivyside Advertiser. A meeting with a careers adviser in his final year steered him towards radio journalism.

After he graduated, he did a postgraduate course in radio journalism at the Darlington College of Technology. Newly qualified, he went back to the north-east to work at TFM, a Teesside commercial radio station. His job was to report on news and sport; it was also here that he did his first football commentaries. After that, he moved to BBC Radio Cleveland and then, after a year, to BBC network radio. Murray was originally employed there as a producer. However, the quantity of football broadcast in those days was huge and he was quickly given opportunities to commentate. The first tournament he attended was the 1998 World Cup, played in France. He remembers working alongside the former England manager, Graham Taylor.

Murray became Football Correspondent in 2014, following in the footsteps of Brian Moore, Bryon Butler and Mike Ingham. He commented, ‘So, since this role was created in the 1960s, I’m only the fourth person to do it,’ and ‘I consider it quite the honour to be part of that quartet.’ Murray’s role includes covering all the top football matches and every England game.

He commentates on two or three matches in an average week. He says his job as a broadcaster is to attempt to bring the listener to the event where he is working. This involves painting pictures. It is also important to let his hearers know what is happening. People can switch on the radio at any time, and they will want to know the score.

Despite the mass of statistical information available, Murray keeps his own records of every major team, including each Premier League and most Championship sides. He normally makes a mass of notes for every match he works on, far more than he is likely to use. If he is to commentate on an unfamiliar side, for instance in the FA cup, he will try to watch them play beforehand. When he is abroad, he will often talk to domestic commentators; it is all too easy to mispronounce players’ names.

Murray has also reported on a range of other sports. He has worked on the Olympics and the Commonwealth Games. In 2012, he commentated on the showpiece opening and closing ceremonies of the London Olympics for Radio 5. David McCarthy said of the BBC’s radio coverage of the 2016 Rio Olympics, ‘It is lively, informative and paints pictures with words … Guys like Iain Carter and John Murray are covering sports like canoeing and rowing and don’t pretend to be experts … but they are first class broadcasters.’  Murray has dabbled in cricket, working for Test Match Special on the 2003 England tour of Sri Lanka. However, his second broadcast sport is golf. He comments, ‘Heading to Augusta every year for the Masters is an absolute pleasure and I love covering the Ryder Cup.’ For the Ryder Cup, the reporters are out on the course, all following individual matches. In 2010 at Celtic Manor, Murray commentated on the final rubber between Graeme McDowell of Europe and Hunter Mahan of the US. For the winning putt for Europe, he remembers ‘But I was standing so close to him [McDowell] on the green that he could hear me commentating so I hushed right up, trying to let him concentrate and sometimes silence is such an effective thing on the radio. He holed that putt and it went wild.’

The Sports Journalists’ Association named Murray as the Sports Commentator of the year for both 2016 and 2018.  Away from sport, he has worked on the Queen’s Golden Jubilee and on the wedding of Prince William and Kate Middleton. He says, ‘I love those ceremonial events … Covering something completely different does make you think about the way you do your day job.’

Murray is a committed radio listener, appreciating the format’s intimacy and its immediacy. He also values being able to broadcast to many millions of people, while still retaining his anonymity. Although huge numbers know his voice, very few would recognize him in the street.

McCarthy, D. (2016, August 10). ‘BBC commentators win gold for stating the bleeding obvious so far at the Olympics.’ – David McCarthy reckons the coverage from Clare Balding and co in Rio has been below par at the world’s biggest sporting event. Daily Record. Retrieved February 22 2021 from https://infoweb-newsbank-com.ezproxy.uwtsd.ac.uk/resources/doc/nb/news/15EB18A52E9ED080?p=UKNB