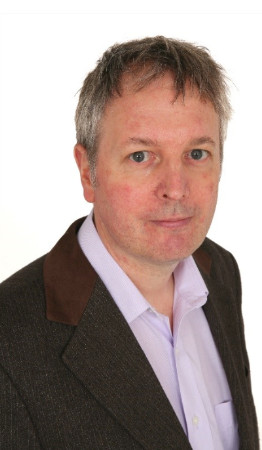 Mike Breslin is a motorsport, motoring and travel writer and a former Formula Ford racing driver.

Breslin is a native of South Wales; he was born in Tredegar and brought up in Caldicot, but now lives in London. He trained as a driver at the Winfield Racing School at the Magny Course circuit in France. (Others who have attended the Winfield Racing School include Alain Prost, Damon Hill and Jean Alesi.) Breslin went on to race in Formula Ford in the 1980s and early 1990s. He remembers ‘picking up a few good placings and crashing fairly regularly.’ However, in 1989, he did major damage to his Van Diemen in a collision with the barriers at Brands Hatch. Following this, he replied to a job advertisement for a reporter to cover races at the Pembrey circuit in Carmarthenshire. At one point, he was providing material from Pembrey for three separate magazines.

After retiring from racing, Breslin entered St David’s University College as a mature student in 1991, to study philosophy. He says he loved his time at SDUC. It was while he was at Lampeter that he met his wife; they returned to the town to get married some years later. After graduating, he did a postgraduate course at the Journalism Training Centre in Mitcham, Surrey. He spent some time working for the South Wales Argus as a business correspondent, before going freelance in 1999, specialising in motorsport and motoring and more lately travel.

Breslin has contributed to numerous motoring and motorsport magazines, including Autosport, Motorsport News and F1 Racing. He has worked in Formula One, as well as road and track testing a wide variety of vehicles, including race cars and supercars. The F1 stars he has interviewed include Lewis Hamilton and Fernando Alonso.

Breslin has done road trips all over the world, visiting six continents and at least 65 countries, and often writing them up for magazines. His favourite journey involved driving almost 6500 km through Southern Africa in a rental Nissan 4X4. He travelled through South Africa, Namibia, Botswana, Zambia and Zimbabwe. The highlights included seeing the Victoria Falls, meeting a group of hippos whilst canoeing in the Okavango Delta and wild-camping amidst a herd of elephants in Botswana.

In 2004, Breslin spent three months driving all over Europe in an old £300 VW Polo. He drove through France and Italy, then caught a boat to Greece and eventually reached Turkey. His return journey took him through nine countries of eastern and western Europe. In Italy, he was able to drive on the Pescara road course, the longest circuit to be used for a World Championship Grand Prix. His other memories include losing the exhaust pipe in Turkey, but then getting it fixed for almost nothing. Breslin described his journey in a series of articles for VW Golf.

The sixth continent Breslin visited was South America. This was one of his shorter road trips, only around 700 km. He drove a Toyota Rav 4 from Arica, close to the border between Peru and Chile, down through the Atacama Desert. He eventually reached San Pedro de Atacama. The highlights of the journey included Valle de Luna, with some of the best desert scenery in the world and snow-capped Andean volcanoes in the distance. Breslin’s other trips have included driving 4000 km across Australia from Adelaide to Darwin, following Route 66 from Los Angeles to Chicago and then driving on to New York to cross the entire US, and travelling all over Japan.

Breslin has written five books. Probably not very surprisingly, he is the author of Road Trip Manual: a Practical Manual, (Haynes, 2020). The book starts with guidance on how to plan and enjoy a good road trip. Later chapters describe iconic routes in every continent, except Antarctica! Writing in the Daily Record, Giles Blair commented, ‘And his [Breslin’s] enthusiasm shines through … as he fuses valuable information with inspirational anecdotes and hardearned tips from road trips he has made …’ Breslin is also the author of The Track Day Manual: the complete guide to taking your car on the race track, (Haynes, 2008).

Breslin also writes fiction and his first novel was The Unfair Advantage: a Formula One novel, (Rough Diamond, 2000). He followed it up with Pieces of Silver, (Pie Shop Publishing, 2014). The lead character, Westbury Holt, is a British racing driver in a German team in the 1930s, who goes on to fly with the RAF during World War Two. Breslin says that he was inspired to write Pieces of Silver by the story of Richard Seaman, a British racer who drove for Mercedes but was killed in a crash at Spa in 1939. Breslin says, ‘I have always wondered how his war might have turned out, what with the deals he had struck and the friends he had made. With that ‘what if’, this book was born.’

Breslin’s most recent fictional work is Faster than the bullet, (Pie Shop Publishing, 2020). The story is split between the Second World War in the 1940s and motor racing in the 1950s. Ingo Six, who loves nothing more than driving fast, has joined the German Army to give himself the chance to ride military motorcycles. He is roped into inglorious war time exploits; one of these becomes a tragic secret. Eventually, he flees to Argentina, with a new identity. He is faced with the challenge of balancing his prodigious skills as a racing driver with his need to stay out of public attention. Marcus Simmons wrote in Autosport, ‘Breslin has come up with a winner – a thriller with more surprise twists than the Futa and Raticosa passes.’ The reviewer in Business Money described it as his ‘book of the year’.

Breslin is a member of the Guild of Motoring Writers and the Welsh Motoring Writers group. He has been highly commended at the Welsh Press Awards (1999), as well as winning Subbing/Production Team of the Year at the IPC Media Awards (2003).