Edward Frank (Ted) Shotter (1933-2019) was Dean of Rochester and a pioneer in the study of medical ethics.

Shotter was born in Grimsby. His father, Frank Edward Shotter, was a businessman; his mother Minnetta was a housewife. After attending Humberstone Foundation School in Cleethorpes, he studied architecture at Durham University. Feeling called to the ministry, he went on to St David’s College, Lampeter, to study theology. He then trained for ordination at St Stephen’s House, Oxford. His first post, from 1960 to 1962, was at St Peter’s church, Plymouth. Following that, he moved to London to work for the Student Christian Movement. The SCM was attempting to develop innovative and non-sectarian ways of contributing to the universities, and the London medical schools in particular.

At that time, some doctors still believed that medical ethics ‘could be picked up on the ward round.’ However, others were starting to realize that scientific advances and social change had created a growing need for the study of ethics in medical education. Andrew Goddard has written of Shotter, ‘Undoubtedly he was the major force in making students and doctors in Britain aware of medical ethics.’

Shotter created the London Medical Group (LMG) in 1963, and then enabled the formation of similar groups in the other British medical schools. The various groups were each to have an annual programme of lectures, seminars, symposia and conferences on ‘issues raised by the practise of medicine which concern other disciplines.’  The students selected the topics for discussion, including ‘The nature and management of terminal pain’ by Cicely Saunders, ‘Child abuse’ by Christine Cooper and ‘Preparation for death’ by Anthony Bloom.  Many people who were to become leading figures in medical ethics and medical law began their careers with these groups. Striving to maintain impartiality and balanced representation, Shotter himself never spoke at one of these events. He believed that part of their success depended on not being perceived as ‘a chaplaincy exercise.’

The Institute of Medical Ethics, (now the Society for the Study of Medical Ethics), grew out of the work of the London Medical Group. Shotter was its first director, serving from 1974 to 1989. In 1987, a working party of the institute recommended in ‘the Pond Report’ that ‘critical’ or ‘analytic’ medical ethics should be included in the medical curriculum. Shotter was also founder of the influential Journal of Medical Ethics, enabling the wisdom he had nurtured to be preserved in scholarly writings. He co-edited his first book, Matters of life and death, (Darton, Longman and Todd) in 1970. He was also one of the three co-authors of Life before birth: consensus in medical ethics, (SPCK, 1986), which dealt with the ethics of abortion and the treatment of infertility.

Shotter was made a Prebendary of St Paul’s Cathedral in 1977. Then, in 1989, his career took another turn, and he became dean of Rochester Cathedral. He strove to engage the cathedral with the wider community, including supporting business and enterprise in Medway. He was Chaplain of the Kent County Constabulary and chaired the Ethics Committee at the University of Greenwich. However, his greatest long-term legacy at Rochester was his commissioning of the first true fresco to be painted in an English cathedral for eight hundred years. In preparation for Rochester’s 1400th anniversary, the Russian artist Sergei Fyodorov painted a fresco of the baptism of Christ and of the men of Kent on the eastern wall of the north transept. Shotter also became secretary of the Association of English Cathedrals. On his retirement from Rochester in 2003, he was awarded the title Dean Emeritus. 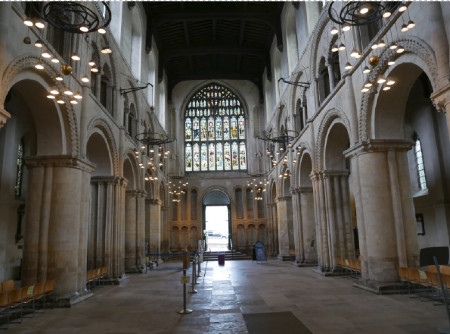 Unusually for a non-physician, Shotter was given an Honorary Fellowship of the Royal College of Surgeons in 2007. He was also a Fellow of the Royal Society of Medicine. The American Hastings Center awarded him its prestigious Henry Knowles Beecher Award for ‘life time achievements in bioethics.’ In complete contrast, he was awarded the Patriarchal Cross of the Romanian Orthodox Church in 1975.

Shotter married Jane Edgcumbe in 1978; the couple had two sons, James and Piers, and a daughter, Emma. He died at home on 3 July 2019. His funeral was held at Holy Trinity church, Blythburgh.