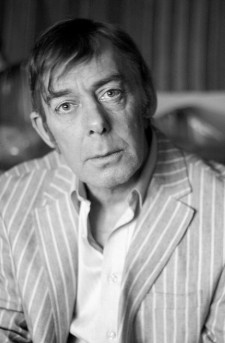 Chris Bendon was a poet and the founder of Spectrum Press.

Christopher Graham Bendon (1950-2011) was born in Leeds; he left the north aged eighteen to work in London. Then in 1977, after his mother’s death, he resigned from a good job at Swan Hellenic to go back to full-time education. His destination was St David’s University College, Lampeter, where he took a degree in English. He married fellow Lampeter student and writer Sue Moules in 1979. He and Sue continued to live in Lampeter, and had a daughter, Cara.

Bendon threw himself into college life. He was president of The New Rhymers Club, and organized lunch-time cultural events as well as poetry readings. The poets he brought to Lampeter included Ted Hughes and Andrew Motion. Bendon was an energetic Rag Chairman in 1978. He organized minibus journeys to sell Rag magazines in Swansea and Cardiff, and saw merchandise, including notebooks and address books, produced alongside the traditional events and magazines. He set a college record for the amount of money raised; in recognition of his achievement, he was awarded lifelong membership of the Students’ Union. However, all his fundraising damaged his studies; he did not achieve the first that had been predicted him.

Together with a fellow undergraduate, Norman Jope, Bendon founded a poetry magazine, Outcrop. Then, when Jope took Outcrop back home to Devon with him, Bendon was one of the four founders of Spectrum press. (The others involved were his wife Sue Moules and two students, Julian Ciepluch and Kenneth Livingstone.) The press produced a new magazine, .spectrum, as well as the Spectrum pamphlets. Sue Moules remembers it as very much a hand-made press, full of idealism and little money. The editorial base was Bendon and Moules’ front room in a flat in Station Terrace. As this was pre-computer, Bendon typed everything up; Moules proof-read and added names and titles with Letraset. The six issues produced included work by 101 writers, many of them students published for the first time, but some of them professional writers. A small grant from West Wales Art for the later issues meant that contributors could be paid a small fee.  However, although .spectrum put Lampeter on the literary map, it was never intended to last for ever. The work was time consuming and unpaid; computers were making their appearance and printing costs were rising. Alongside this, .spectrum pamphlets featured new work by individual writers. The first pamphlet, published in 1982, contained At the End of the Bay, a play by Dic Edwards. The press continued producing pamphlets until 1990.

Bendon loved writing; he published fifteen volumes of poetry in his lifetime, with another at proof stage at his death. To a large extent his literary concerns mirrored his experience of life, for instance contrasting Welsh-language and English-language cultural backgrounds. His first book In Praise of Low Music, (Outcrop Publications, 1981), was followed by Software (Spectrum Press, 1984). In Constructions (Gomer, 1991), he revealed his eagerness to put down roots in Wales, his adopted country. A Dyfed Quartet (Headland, 1992) examined the undercurrents of Welsh socioeconomic history, as Bendon moved through the country’s mythic landscape. His early poetry was lyrical and pastoral; his later work became more avant garde. His later books Jewry (1995), Crossover: a Play on Words or Libretto for an Imaginary Opera (1996) and Novella (1997) were published by Poetry Salzburg. In his first published play, Crossover, the two leading characters English Peter and Welsh Pedr represent Bendon himself. Peter is a carpenter who wants to be a poet; Pedr is a poet who would like to have been a composer. Following the breakup of their marriages, the two men make pilgrimage holidays in reverse directions. Pedr ends up in England and Peter in Wales.

Bendon’s work has been described as learned, but still human. Robert Minhinnick, the former editor of Poetry Wales, described it as ‘inventive and brave;’ Poetry Review saw it as ‘energetic, striking and original.’ Bendon was awarded the Hugh MacDiarmid Memorial Trophy in 1988 and The Guardian/WWF Poetry Competition Prize in 1989.

Bendon was diagnosed with cancer in Summer 2011 and sadly died just a few months later on November 1st, 2011. His papers, including typescripts of his poetry, unpublished poems, diaries and a collection of magazines and anthologies, are stored in the National Library of Wales. His daughter Cara placed a commemorative bench in his memory by the river Dulas, on the Lampeter campus, a place they often spent time together during her childhood.

Bendon, C.G. (1996). Crossover: a play on words or libretto for an imaginary opera. Salzburg: Salzburg University