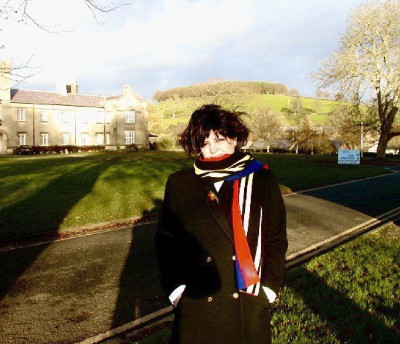 Harrison Solow is a scholar, author, lecturer, consultant and writer in the literary, academic, scientific, and entertainment worlds.

She was born in Hawaii, grew up in the San Francisco Bay Area, and lived in Canada and the UK for over 25 years. As a child, she was a compulsive reader. Her mother taught her to read before she started school; by the time she was six, she had already read hundreds of books. As there was then no “gifted child program” at her elementary school, she took most of her classes with the sixth-year students while still a second-year student of seven. She was later educated at a convent school, and, at the age of 17, entered the Franciscan Convent to begin her training as a nun. Although she “wouldn’t have traded those years in the convent for anything”, she eventually found that this was not her path in life, and left to pursue a path of exploration and scholarship in the secular world.

She married in her twenties and had two sons, now both extremely successful adults. She began writing for various organisations and institutes while her boys were young. When they were school-age, Dr Solow launched into a full-time career as a consultant, writer and executive for such organisations as The Advisory Council on the Status of Women, The Institute for Research on Public Policy, NASA, and for notable public figures in both Canada and the USA.

She has four degrees from three different countries, having earned an Honours BA degree from Saint Mary’s Jesuit University in Halifax, Nova Scotia, a double Master of Fine Arts degree from Mills College in California and a PhD from The University of Wales, Lampeter. She also holds the equivalent of three additional BA degrees, due to her studies in the convent and in various universities in the United States and Canada - studying every imaginable course, from Medical Biology, to Astronomy, Philosophy, Calculus, French, Latin and Vocal Music. She went on to teach English at the University of California at Berkeley. She was also Special Projects Editor for the University of California Press in the 1990s.

Her writing caught the attention of the Press and she was soon asked to write a book for the Press, an invitation that took her to Hollywood and into a new life. It was there that she began an extraordinary, glamorous life as a sought-after writer, ghost writer, speechwriter, television consultant, lecturer and speaker in the entertainment industry, in the space program and in the science fiction (literary and movie) worlds. Just as she finished her book (a philosophical work on the significance of Star Trek in American culture), which enjoyed unprecedented success and was one of the two best sellers in the history of the University of California Press, she was introduced by mutual friends to Herbert F Solow, a legendary industry executive, producer and writer, the executive force behind Star Trek – the head of the studio (Desilu) that produced it, and later, the head of Paramount Pictures and MGM Studios).  For both of them, as they describe it, “that was it.”  As Dr Solow put it, “We married the minute we met, though the actual wedding was some months later.”

The Solows lived an active, creative, work-driven life, both publicly in the industry and privately at home in Malibu – spending time with friends and family and attending Hollywood events with friends and colleagues. They were both on book tour at the same time – and often travelled and lectured together.

In 2004, the Solows came to the University of Wales Lampeter – Harrison to lecture and to work on her PhD and Herb, to support Harrison and to work on a second book. Dr Solow had been accepted at several universities; however, when she was interviewed by UWL, something inside said “This is your place.”  (As an aside, her friend and colleague, the brilliant science fiction writer and explorer, Sir Arthur C. Clarke, wrote her one of her university recommendations.)

In Lampeter, she took the trouble to learn Welsh; she feels, ‘I don’t know how you can know certain things essential to the Welsh (or rather the Welsh-speaking Welsh) without speaking Welsh.’ She has also written, ‘It seemed to me that every Welsh speaking person I knew in the town was taking my Welsh courses right along with me – they all expressed an eager interest and entered into a lively participation.’ She was part of both the Welsh-speaking and English-speaking worlds - including choirs - on campus. She sang every week in the university chapel choir, with the Welsh choir including the Plygain, the traditional Welsh church service held early on Christmas morning. Academically, Solow thrived. Very unusually, her PhD thesis, The Bendithion Chronicles: An Epistolary Tale in a Variety of Literary Forms, was accepted without any need for changes. She describes it as ‘an epistolary, mixed-genre literary work: a creative thesis with a critical commentary about an enigmatic encounter with a Welsh-speaking village, portrayed in contrast to the Hollywood film and television society of which I have long been an intimate part.’

Dr Solow loved teaching in the English department at Lampeter. Alongside this, she wrote a critically acclaimed book, gave weekend, writing seminars at Gregynog to graduate students and the general public, sat on various committees, published poetry, and produced a Pushcart Price winning essay called Bendithion, which profiles the talented Lampeter singer-postmaster, Timothy Evans. (The Pushcart Prize honours the best small-press writers of short stories, poetry and essays in America.) There were over 8,000 entries in the competition that year.  Dr Solow also won several first-place awards for her short stories and poetry during her stay in Lampeter. In 2008, she was appointed Writer in Residence at University of Wales Lampeter.

Solow’s book Felicity & Barbara Pym was published by Cinnamon Press in 2010. It consists of a series of emails from an academic, Mallory Cooper, to a bright student, Felicity, who is writing an essay about the English novelist, Barbara Pym. Felicity complains that nothing ever happens in Pym’s stories; Cooper’s replies bring Pym, her world and her novels vividly into focus. Through her voice, Solow critiques academic approaches to literature. She strives to answer the question for Felicity, ‘Why read literature?’

Solow has also rewritten a great deal of material, on subjects ranging from physics to the entertainment industry. Her role has been to make obscure texts clear to an audience that would not easily understand the original version. She may do developmental writing for a learned publisher whose authors are accomplished academics, but not used to writing for a less scholarly market. Solow was once commissioned to rewrite the biblical book of Genesis for translators who spoke five languages, but were not gifted writers of English. Solow says, ‘To be able to bridge the world of the scholar/researcher (or even another writer whose subject or material is obscure) and the world of the intelligent reader who wants to enter that world is a great satisfaction.’

Dr Solow lost her beloved soulmate, Herbert F. Solow, in late 2020. Legions of fans mourned his loss and at this writing, she is still responding to the thousands of condolence letters that have poured in for the former Head of MGM, Paramount and Desilu Studios. Mr Solow was famous as one of the founding fathers of Star Trek and its original executive producer, as well as the man who turned Mr Spock from the red, forked-tailed devilish creature that was originally presented to him, into the cerebral and beloved Vulcan everyone knows today, and also the inventor of the “Captain’s log” device, among many other things. His loss is felt by his friends and colleagues at the Academy of Motion Picture Arts and Sciences, The Director’s Guild, the Writer’s Guild and the Producer’s Guild, as well as those who knew him when he ran Boreham Wood Studio in London as part of his MGM mandate. Harrison and Herb are the joint authors of Star Trek sketchbook: the original series, (Pocket Books, 1997).

Dr Solow was recently honoured by the Academy by an invitation to continue attending screenings and events at the Academy as she had for decades with her husband.

In 2018, Harrison Solow was inducted into the Daughters of the British Empire both because of her ancestry (which includes, to her delight, some Welsh) and her contribution to English letters.

Dr Solow is beginning to take up her literary interests again, after some time in seclusion, and has just contributed a poem to a collection lauding the American Supreme Court Justice, Ruth Bader Ginsberg. She has begun to accept invitations for interviews again and is at work on her fourth and fifth books simultaneously.