Born in 1803, a native of Parcau, Newport in Pembrokeshire, Joseph Hughes lived most of his working life in Meltham, Yorkshire. He was educated at Carmarthen and Ystrad Meurig grammar schools, before entering St David’s College in 1824.

Upon graduating he was ordained deacon by the Bishop of St. David’s in 1828 and made priest the following year. His only curacy in Wales was at Llanfihangel Penbedw in Pembrokeshire however, it was only a short curacy as by 1830 he was the first incumbent of the new church at Lockwood, Almondbury in Yorkshire. 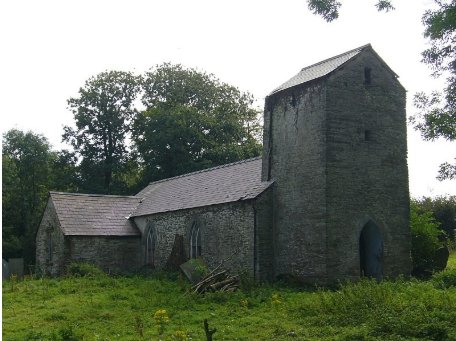 Picture: the ruined church of St Michael in Llanfihangel Penbedw

Hughes spent seven years at Lockwood and during this period met and married Catherine Laycock with whom he had one daughter, Jane. Following a brief period working as a curate in Liverpool the couple moved back to Yorkshire, taking the curacy of Meltham where Hughes worked until his death in 1863, aged sixty-one. His obituary in the Huddersfield Chronicle described him as an ‘amiable man and respected Christian minister… [who] by his faithful preaching, active benevolence, and his unwearied exertions wrought a gratifying change to Meltham.’ This was demonstrated on the day of his funeral when the neighbouring clergy and gentry, the Local Board of Meltham, the schools and a large number of the inhabitants of the town, lined the approach to the church along which the funeral procession was to advance.

However, Hughes was not only a respected minister but an author and poet who was known in Wales as Carn Ingli, a name adopted from the mountain of his homeland in Newport.

As well as writing numerous poems Hughes was a gifted translator, translating amongst others, Bishop Herbert’s missionary hymn From Greenland’s Icy Mountains and segments of Edward Young’s Night Thoughts. He also wrote the standard history of Meltham which he began in 1851, but which remained unfinished upon his death and was edited by his wife Catherine, and finally published in 1866. Throughout his life Hughes regularly returned to Wales to attend, and on numerous occasions conduct, the annual eisteddfod.

In fact, Hughes was one of the four promotors of the Great Llangollen Eisteddfod of 1858 which, despite quarrelling between the adjudicators and the committee over the awarding of prizes, and a pavilion full of holes which let in the rain, became instrumental in the establishment of the National Eisteddfod which continues to this day. It was widely advertised throughout England, Wales and America and attracted thousands of people who travelled by foot, canal or excursion trains from South and North Wales, Liverpool, Manchester and Birmingham. It was the first eisteddfod where the Gorsedd of Bards wore robes rather than the usual sashes on their arms, and it introduced some unusual competitions, such as the prize of £3 for the day labourer with the most children who could read and write Welsh, and £2 for the best song accompanied by a stick tapping the stage.

Hughes was also Secretary and official Bard of the Association of the Welsh Clergy in the West Riding,  a group of Welsh clergymen living in the region who began meeting in 1852 to discuss matters relating to the Church in Wales, and published their transactions in Welsh newspapers and periodicals.

Hughes is buried with his wife and daughter in St. Bartholomew’s Church in Meltham.