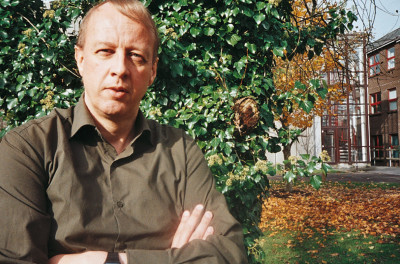 Norman Jope (1960-) is a widely published author who specialises in poetry. He prefers to avoid the constraints of the term ‘poet’, as he regards poetry as an activity rather than an identity and writes (less visibly) in other genres. Nor has he entered a poetry competition in his life.

Jope was born in Plymouth on 28th May 1960 and brought up in nearby Plympton. He attended Plympton Grammar School – the alma mater of the painters Reynolds, Eastlake, Haydon and Northcote – between 1971 and 1978. His interest in poetry began there in 1975-76 and, taking advantage of the wide range of translated poetry available in the Seventies, he began to acquaint himself with the international poetry scene.

He attended St. David’s University College between 1978 and 1982, originally to study English before switching to Philosophy (a decision, of course, completely unconnected with the additional year’s available grant). Whilst an undergraduate student, he enjoyed the lively literary scene on campus at that time and befriended other writers including Chris Bendon (also featured in this volume). In his role as secretary of the New Rhymers’ Club, he took advantage of the National Poetry Secretariat’s funding to invite several well-known poets to read in Lampeter. He also edited the poetry magazine Outcrop and enjoyed his first magazine publications, following this up with two chapbooks printed at the College printers: Primal Solutions (Outcrop, 1981) and A Second Adam (Outcrop, 1982). He was also a member of the College’s University Challenge team that reached the semi-finals of the competition in 1981.

After graduation, Jope moved back to Plymouth and, in 1983, to the West Midlands. He lived there for just under eight years (in Leamington Spa and Birmingham) before returning to Plymouth. After a period of writing ‘for the desk drawer’ he began to send out work again in 1988 and three further chapbooks appeared: Spoil (Spectrum, 1989), Tors (Phlebas, 1990) and In the Absence of a Summit (Phlebas, 1992). The rudimentary production standards of these five chapbooks reflect the technologies available at that time and a Selected Early Poems is overdue.

In 1989, Jope launched the literary and cultural magazine Memes, taking Richard Dawkins’ neologism for its title at a time when the word was unfamiliar to most. This ran for ten issues, up until 1994, and featured a wide range of contemporary writers and illustrators. Seeing the word constantly in use in 2020 is a source of amusement to Jope (and, no doubt, to Dawkins).

During the Nineties, Jope lived in Swindon and Bristol before returning to Plymouth in 1999. His first collection proper, For the Wedding-Guest (Stride, 1997), appeared during this time and one of the poems, ‘The Pox in Roseland’, was featured as the Independent’s Poem of the Day in November 1996. By then, Jope’s work had appeared in a variety of outlets in the UK and North America. He was also a regular contributor to the Wessex Poetry Festival, which took place annually in Blandford Forum, Dorset under the auspices of the international literary magazine Tears in the Fence and its editor David Caddy.

On his return to Plymouth, Jope became involved with what was then the Plymouth Poetry Exchange and subsequently evolved into the Plymouth Language Club (February 2000 to the present day). Along with Steve Spence, he is now one of the co-ordinators of this reading series which, with over one hundred events to its name, is one of the longest-running live poetry events in the UK. An associated discussion group met between 2003 and 2014 at a range of venues across Plymouth and South Devon. Jope has also read frequently at Kenny Knight’s Cross-Country Writers reading series in Plymouth. In 2006 he co-edited the anthology In the Presence of Sharks: New Poetry from Plymouth (Phlebas, 2006) with the late Ian Robinson, bringing together work from twelve prominent Plymouth poets. His activities as a literary promoter have recently led the local daily newspaper, the Plymouth Herald, to dub him one of the fifty ‘coolest Plymothians.’

Jope has worked as an administrator at what is now Plymouth Marjon University since March 2002. During that time, he has had three further poetry collections published in the UK: The Book of Bells and Candles (Waterloo Press, 2009): Dreams of the Caucasus (Shearsman Books, 2010): and Aphinar (Waterloo Press, 2012). In addition, he has continued to publish his writing in a number of journals (paper and online) and, in 2005, his work was included in a selection of contemporary British prose-poetry in the American magazine Sentence. Portland: A Triptych (with Tim Allen and Mark Goodwin) was published by Knives, Forks and Spoons in 2018 and further collections are awaiting publication. In particular, The Rest of the World is due to be issued by Shearsman Books in November 2021; much of it concerns information found through virtual explorations, particularly Google Street View. Other pieces examine Jope’s first-hand knowledge of Plymouth, Hungary and elsewhere.

In 1996 his partner, the artist Lynda Stevens, moved to Budapest where she still lives. Jope has written about Budapest and Hungary ever since, although his knowledge of the challenging Hungarian language remains rudimentary. A collection of poems and texts about Hungary, translated by Zoltán Tarcsay, entitled Gólyák és rétesek (Storks and Strudels) was published in 2018 by FISz-Apokrif and launched at the Budapest Book Week.. A follow-up event was held in early 2019 at the Írók Boltja (Writer’s Bookshop), the most prestigious literary bookshop in Budapest. Jope was also invited to read his work at the Bucharest Union of Writers in October 2008 and individual pieces have been translated into several languages including Romanian, French and Hebrew.

Jope has written literary criticism for Tears in the Fence, Stride and other outlets and co-edited a Critical Companion to Richard Berengarten (Salt, 2011 and Shearsman, 2016). This international collaboration, celebrating the work of the prominent English, Jewish and international poet formerly known as Richard Burns, constitutes a sustained critical response to the poet’s work that runs to over five hundred pages.

Jope’s own work, which has moved between the categories of ‘poetry’ and ‘prose-poetry’ since he began writing, can perhaps be best classified as ‘continuing modernism’. Whilst it responds to a range of influences up until the present day, the major international voices of the mid twentieth century are focal and there is relatively little postmodernist detachment and irony. The English Romantic Poets are also a constant, if sometimes submerged influence – the title of Jope’s first book naturally refers to fellow-Devonian Coleridge’s Ancient Mariner.

Themes of travel, location and place are prominent in Jope’s writing and he is particularly interested in the ways in which places relate to each other in a national and transnational context. It is a poetry that is not afraid to name places and people, moving freely between the abstract and the concrete as well as between specific frames of reference.

Writing of Jope’s work, David Pollard has noted that ‘this is a poetry of exile, of the wandering Jew, of the traveller that knows that what he does is better than to arrive yet yearns, nonetheless, to be, to find a topos and to know….’. Todd Swift has described Jope as ‘one of the more intriguing innovative poets now writing in the UK’ and has noted that ‘his work is at times satisfyingly strange, exotic and linguistically rich’. Writing of Dreams of the Caucasus, Donald Gardner notes that ‘Jope’s reach is romantic and wide, not only geographically – from the Sahara to the Hungarian puszta and on to the Arctic Circle. As with much travel writing, there is a goal beyond the journey. These texts are an attempt to read nature for signs and they also represent a quest for the elemental in himself, a sort of spiritual geology’. Alan Morrison has written that ‘for me, the ringing glory of Jope’s poetry – and (…) his poetic prose – is the seemingly effortless way in which he is able to balance his modernist sensibilities with an immediately attractive, painterly and musical application of language’.

Jope’s long-term intention is to join his partner in Budapest, finally learn Hungarian, and exchange the Plym and the Tamar for the Danube… whilst keeping all three rivers in mind.