Euros Bowen (1904-1988) was a major religious poet and one of the most prolific Welsh language writers of the twentieth century.

Bowen was the second of the seven children of Revd. Thomas Bowen, a Welsh Independent minister who had previously worked as a miner. Euros’ mother was Ada, the daughter of the under-manager of Tyn-y-bedw colliery. His younger brother Geraint was to be Archdruid of Wales from 1979 to 1981. Euros was born in Treorci, in the Rhondda. Thomas Bowen’s job meant that the family moved several times. Euros attended primary schools in Treorci and Llanelli. He spent only a year in intermediate school, before working in a furniture shop and then as a clerk in a tin-plate works. Alongside this, he attended evening classes at the Llanelli Art School.

In 1921, Euros Bowen went back to full-time education; he attended Whitland grammar school and New Quay College School. He then entered Carmarthen Presbyterian college to train as a minister with the Welsh Independents. In September 1924 he moved to the University College of Wales, Aberystwyth, before transferring to University College, Swansea, in 1925. He graduated with honours in philosophy in 1928. After this, he was awarded a scholarship to Mansfield College, Oxford. Unfortunately, illness meant he was unable to sit his final exams there; he was awarded an aegrotat degree.

Bowen joined the Anglican Church in Wales in 1933 and entered St David’s College. Lampeter, to train for the priesthood. He was ordained deacon in St Asaph Cathedral in 1934 and then priested in 1935. He became a curate in Wrexham, where he married Neli Tilston Jones, a secretary with the electricity board. He and Neli had two sons, Gwyn Euros Bowen and Huw Euros Bowen.

In 1939, Bowen was appointed rector of Llangywer on the shores of Llyn Tegid (Bala Lake). He also gained responsibility for the parish of Llanuwchllyn in 1958. Bowen stayed at Llangywer until his retirement in 1973. After this he returned to Wrexham, where he remained for the rest of his life. 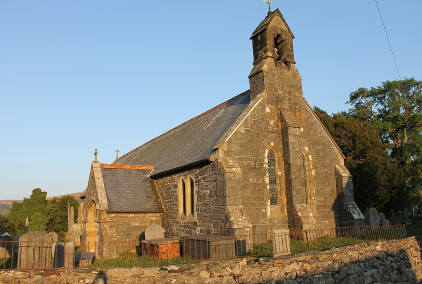 Bowen believed passionately in the Welsh language. From 1946 to 1952, he worked with J. Gwyn Griffiths and Pennar Davies to produce a Welsh literary periodical, Y fflam. Its main aim was to provide a new platform for younger, Welsh-nationalist writers. Then, in the winter of 1947 while snowed into his rectory, Bowen began to devote himself to writing poetry. In 1948 his poem ‘O’r Dwyrain’ won the crown at the National Eisteddfod held at Bridgend. Two years later, at Caerphilly, his piece ‘Difodiant’ was again successful. Bowen’s first volume of poems, Cerddi, came out in 1958. He went on to publish nineteen more volumes of poetry.

Bowen set out to widen the frontiers of Welsh-language poetry. He experimented with the strict metres and the system of assonance and internal rhyme (cynghanedd) found in traditional Welsh poetry.  In Cerddi, he wrote several of his poems in what he called an ugeined, a metrical unit he had invented. In Cerddi Rhydd (1961) he wrote in rhythmical paragraphs, rather than in lines. His main medium in his later work was free verse, although the attraction of cynghanedd remained.

Bowen’s work could be difficult. He failed to win the chair at the 1963 National Eisteddfod, as his poem ‘Genesis’ was seen as too obscure. He said of himself ‘When I began writing poetry in 1947 I decided to have nothing to do with two traditions of the art: (i) the tradition of expressing straightforward literal meaning, the tradition of poetry which paints a picture, and nothing more, photographic poetry, and (ii) the tradition of poetry which makes statements, using images, by way of simile and metaphor, as ornamentation. I decided to use images, not as ornamentation but as the very medium of expression.’ Some critics suggested that his work was influenced by the [French] Symbolists. Bowen himself rejected this, insisting that he had developed his method before he became aware of the imagists and symbolists. He saw his work as ‘sacramentalist’; for him there was an essential similarity between his two roles as priest and poet. The whole material world shows God’s power and goodness; this means it has the character of a sacrament. For Bowen, Christ’s incarnation endorsed God’s gift of the material world. His imagery was at once both concrete and abstract.

In 1977 the poet and critic Alan Llwyd published a book about Bowen’s work. However, Bowen rejected many of Llwyd’s interpretations, and published his own volume, Trin cerddi, in response. The relationship between the two writers was soured.

Bowen translated works by Sophocles, Virgil and Athanasius into Welsh, as well as producing a Welsh anthology of French symbolist poetry. In 1974, he published a bilingual volume, containing English translations of some of his poems.

Bowen died at Ysbyty Maelor, Wrexham, on 2 April 1988; he was buried in Wrexham cemetery.

Stephens, M. (ed.) (1998). The New Companion to the Literature of Wales. Cardiff: University of Wales Press