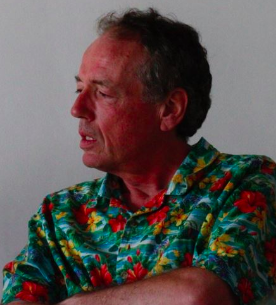 Toni Bianchi (1952-2017) was a Geordie, who became known as a Welsh language novelist and poet.

Bianchi was born in North Shields on 5 April 1952. He was his parents’ only child; his father, with whom he had a difficult relationship, was a policeman and of Italian descent. Bianchi attended a Roman Catholic school on Tyneside. He left school with poor exam results, probably because his teachers had persuaded him to sit his exams a year early. However, in 1969, he became a student at St David’s College, Lampeter. There he graduated with a double first in English and Philosophy, before staying on to write a PhD on the influence of the Gemini myth on the shorter works of Samuel Beckett.

Also, at Lampeter, Bianchi met his future wife, Diana; she was a militant Welsh speaker as well as a pacifist activist. Bianchi took an Ulpan course to learn Welsh; he commented ‘I fell in love with Welsh like you fall in love with a piece of music.’  Bianchi and Diana had two daughters, Heledd and Rhiannon, both named for characters in early Welsh literature. Sadly, however, their marriage ended in divorce.

After graduating, Bianchi taught English at Connah’s Quay in Flintshire and then at the University College of Wales at Aberystwyth. His next post was as literature officer (English) at the Welsh Arts Council; he eventually became head of the literature department. Bianchi lived in Cardiff for the rest of his life.

After leaving the Arts Council in 2002, he became a freelance writer.  His experience of institutional life inspired his first novel, Esgyrn Bach (2006), a satire on institutional bureaucracy. He followed this with Pryfeta (2007, translated by him as Daniel’s Beetles, 2011). Pryfeta won the Daniel Owen Prize in 2007 and was short-listed for Wales Book of the Year. Sol a Lara (2016) was awarded the Prose Medal at the National Eisteddfod in 2015. His one English language novel was Bumping, set in his home town of North Shields.

Bianchi felt every novelist needed to create a persona separate from themselves. He commented that ‘I soon discovered that it was easier to create such a mask in my second language. And the reason for this, of course, was that Welsh was itself a mask.’ He also believed that writing in Welsh made it less painful for him to tackle personal subjects. (For instance, Pryfeta drew on his mother’s memory disorder; in one story in Cyffesion Geordie oddi Cartref, a clairvoyant took him to visit his father in hell).

Bianchi was particularly interested in the lives of ordinary elderly people, slipping out of synch with the world around them.  Many of his central characters are obsessives. In his collection of short stories, Cyffesion Geordie oddi Cartref (2011, meaning Confessions of a Geordie away from home), he wrote about some of his childhood friends, the bullying he had experienced at school and the violence of his father).

Bianchi also mastered the complicated rules of traditional Welsh poetry; as well as free verse he wrote cynghanedd, (a system of alliteration and internal rhyme, obligatory in the 24 strict metres of Welsh bardic voice). He won many awards for writing an englyn, a thirty syllable four lined rhyming stanza which is one of the main traditional measures of cynghanedd. He also wrote an academic monograph on Richard Vaughan,

Bianchi supported left-wing causes all his life, although there is little overtly political in his work. He was active in The Wales Anti-Apartheid Movement and supported the movement for nuclear disarmament.  He was a fellow of Yr Academi Gymreig (the Welsh Academy of Writers).  He was also a gifted pianist.

Bianchi died on 2 July 2017 at his home in Pontcanna. He was survived by his partner, Ruth.

Tony Bianchi – Geordie writer who became one of the most acclaimed Welsh-language novelists of his age. (2017, July 20). Daily Telegraph. Retrieved from https://infoweb-newsbank-com.ezproxy.uwtsd.ac.uk/resources/doc/nb/news/165C274D42158220?p=UKNB