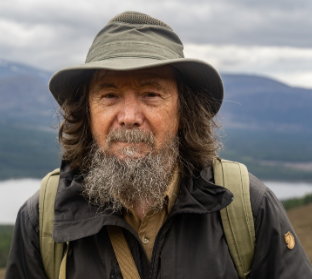 Townsend was brought up in Formby, on the Lancashire coast. Although the nearest mountains were far away, he developed a love of wild places as he wandered through woods, fields, sand dunes and along the seashore. The first hill he climbed was on a primary school trip. On a visit to Edinburgh, he and another boy slipped away to walk up Arthur’s Seat. Townsend has commented ‘I knew then I wanted to do this over and over again.’

In April 1978, Townsend set out on his first long distance walk, from Land’s End to John O’Groats. The journey, covering 2020 km, took him 71 days. At that time, communication was by means of postcards and phone boxes; his family rarely knew exactly where he was. He kept a journal, describing his route, the wildlife he saw and the places he stopped every night. He even recorded the prices of camp sites, (10p for Dale Head Farm in the Yorkshire Dales, £1 for the Pine Woods Caravan Site in Tyndrum). At the end of the walk, he wrote ‘… now comes the hard part, the return to Manchester. I feel strangely lost. I wandered amongst the people at John O’Groats not quite sure what to do. I feel both glad and sad, that I’ve done it and that it’s over. Tomorrow it will seem real. Tonight in the tent it is just as normal. I like living in the tent.’

As Townsend had not yet started writing seriously, he didn’t realize that he might want photographs. He had a cheap compact camera, but this quickly broke!  After the walk, he wrote his first magazine article for Camping World. As the editor advised Townsend that he needed to supply pictures as well as words, he purchased a second hand SLR camera and taught himself how to take images of a publishable quality.

Townsend’s next expedition was the 4 285 km US Pacific Crest Trail, arguably the holy grail of American long-distance hiking.  The trail stretches from the Mexican to the Canadian border, following the line of mountains east of the Pacific Ocean and going through the deserts of southern California, the mountain wildernesses of the Sierra Nevada and the volcanic landscapes and forests of the Cascade Range. At that time, it was impossible to send luggage on ahead. Townsend carried snow shoes, crampons and an ice axe through the desert. He was one of only eleven people who completed the walk in 1982; over a hundred started it that year. He has since commented ‘… it deepened my love of nature, walking and wild camping and also showed me what real wilderness was like. I came back determined to do many more long wild wilderness walks, a life-long commitment.’ Townsend described his trek in Rattlesnakes and bald eagles: hiking the Pacific Crest Trail (Sandstone Press, 2014).

Closer to home, in 1996 Townsend became the first person to climb all of Scotland’s Munros and tops in a continuous walk. (A Munro is defined as a Scottish mountain with a height of over 3 000 feet). Townsend’s journey to all 517 of the summits listed in Munro’s Tables involved 2700 km on foot and 170 000 metres of ascent. He has said this was a particularly difficult walk as it involved climbing summits in bad weather. His route looked like a jumble of string on the maps; unusually, this wasn’t a walk from A to B. He started at Ben More on the Island of Mull, finishing at Ben Hope in Sutherland. He remembers the joy of being out on the hills for months on end. He described his journey in Munros and Tops (Mainstream Publishing, 1997). 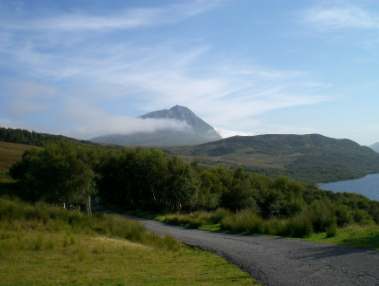 In 2012, Townsend read Peter Wright’s Ribbon of wildness. Wright described the 1200 km spine of Scotland, starting at Peel Fell in Cumbria and winding its way north to Duncansby Head near John O’ Groats. Whether rain flows into the Atlantic or the North Sea depends on whether it falls west or east of that line. Townsend set out to follow in Wright’s footsteps by walking this route, attempting to stay as close to the Watershed as he could. It passes through the Southern Uplands, the Central Lowlands, the Highlands and the Flow Country, crossing 44 Munros and 24 Corbetts. Townsend comments ‘The route is extremely tricky to follow and in places is almost impossible to see. It is rarely on a trodden footpath and heads over rough land.’ However, he also says ‘I was stunned by the frequently wild and dramatic landscapes all along this route. And I encountered an incredible array of wildlife where I had imagined there would be few.’ Townsend described his journey in Along the Divide: Walking the Wild Spine of Scotland, (Sandstone Press, 2018).

Townsend’s numerous other hikes include the almost 5000 km Continental Divide Trail; the 1290 km Arizona Trail; 2090 km south to north through Norway and Sweden; 1600 km south to north through the Yukon Territory; the 1930 km Pacific Northwest Trail, and 800 km from Yosemite Valley to Death Valley. He has written twenty-five books. He was awarded the Outdoor Writers’ Guild Award for Excellence for Outdoor Book of the Year for The Backpacker’s Handbook (Oxford Illustrated Press, 1993) and for Out There: a Voice from the Wild (Sandstone Press, 2016). He is a trustee of the Scottish conservation charity the John Muir Trust and has been President of the Mountaineering Council of Scotland. Townsend says of himself ‘I don’t feel I do anything special. Most of what I do is not like, say, technical mountaineering. If you are going to climb a Himalayan peak you need an awful lot of technical skills and training. What I’m talking about is going for a walk – it’s just that I’ve done walks longer than most people go on.’

Chris’s love affair with the strath is as strong as ever. (2013, September 18). Strathspey & Badenoch Herald. Retrieved January 5 2021 from https://infoweb-newsbank-com.ezproxy.uwtsd.ac.uk/resources/doc/nb/news/148F1ADF86B0C4C0?p=UKNB

Russell, F. (2013, September 15). My walk on the wet side – Adventurer Chris Townsend braved the worst that the elements could throw at him as he hiked 750 miles across Scotland’s watershed. Here he tells a story of rain, solitude, discovery, rain, wildlife, biting clegs and, yes, more rain. Sunday Mail. Retrieved January 5 2021 from https://infoweb-newsbank-com.ezproxy.uwtsd.ac.uk/resources/doc/nb/news/148D6C63725FC468?p=UKNB