Ernest Melville Rowland (1864-1940) was the first St David’s College rugby player to be capped for Wales.

Rowland was the son of Revd. Evan Rowland, a St David’s College alumnus, and his wife Jane, née Morris. Ernest was the eldest of at least fifteen children; he was one of five brothers to be ordained. He was born in Neath, but the family quickly moved to Whitland in Carmarthenshire and then to Narberth. He attended Chardstock College, (then in Dorset), before going up to St David’s College, Lampeter in 1883.

He was a fine sportsman, representing the college at football and cricket as well as rugby. He was Sub-Captain of the cricket team in 1885, and scored a goal against Aberystwyth University College in Lampeter’s first match under the rules of association football. He was a member of the organising committee for the College Athletic Sports, in those days always held on the second Monday of November. He also completed strongly in numerous events there.

However, Rowland’s finest sport was rugby, where he was a fine athletic forward. At this time, the St David’s College team was strong enough to compete with the best sides in Wales. The college met such teams as Llanelli, Swansea and Neath. Rowland was picked to play for Wales against England at the St Helen’s Ground, Swansea on January 3 1885. This was only the eighth international match played by Wales; Rowland was the fifty first player to receive a Welsh cap. However, England beat Wales by one goal and four tries to one goal and one try. The Welsh forwards were blamed for the defeat; Rowland was one of four forwards dropped for the next match against Scotland. He was never to play for Wales again.

Rowland does not appear to have been particularly popular with his fellow students. The St David’s College and School Gazette of May 1885 seems to damn his performance with faint praise, describing him as:

‘a strong and useful forward, fair dribbler, always well on the ball, but as a collarer not always safe; was selected to play this year for Wales v. England.’

In 1884, Rowland had been successful enough in his studies to be awarded a £24 scholarship for modern history. However, on February 18 1886, the College Board announced,

‘Mr E.M. Rowland was sent down at once for the rest of the term (for a combination of serious offences): and it was decided that he is to keep only the minimum of residence (eight weeks) in the two other terms requisite for his degree.’

When Rowland graduated in the summer of 1886, it was with only a pass degree. At the time of the 1891 census, he was employed as a private schoolmaster at Exmouth House Boys’ School, Stoke Damerel, on the outskirts of Plymouth. He must soon have emigrated to Canada; in 1894 he was ordained Deacon of the Mission at Clarendon with Palmerston in the Diocese of Ontario. He was priested the next year.  The churches he was responsible for were Holy Trinity Church, Plevna and All Saints Church, Oompah, with St Stephen’s Church, Strathadden. (Plevna is situated about 120 miles southwest of Ottawa.)

In 1896, he married Hannah Lilian Gilbert in Oompah. (Hannah was also British. She had been born in Bury, Lancashire, in 1875, but left England in 1886.) The couple had four daughters and three sons. In 1902, Rowland moved to Newborough, before going on to Powassan in 1905. His last post was as rector of West Flamborough with Rockton; he worked there from 1913 until he retired in 1930. 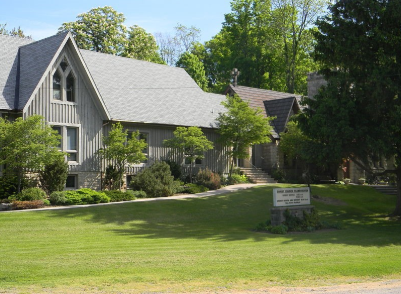 In Canada, Rowland appears to have enjoyed field sports; he wrote several articles in Rod and gun in Canada asking that the game laws be enforced. In February 1909, he described a ten-day hunting trip to the Parry Sound district; his party, consisting of nine people, had killed eleven deer and wounded one more.