Hannah McKeand is a polar expeditioner; in 2006 she set a world speed record for skiing solo and unsupported to the South Pole.

McKeand studied classics and ancient history at the University of Wales, Lampeter. She has said, ‘I didn’t want to be in a big city as I wanted to be somewhere intimate where I would get to know lots of people and be able to escape into the hills when it got too much for me … I loved being in a small department and all the lecturers knowing me by name and I made some amazing friends during my time there.’

After leaving Lampeter, McKeand worked for several years as marketing manager for a theatre company. However, in 2001 she was left an inheritance by her godfather; she felt she should use this to do something special. She started visiting the immense Western Desert in North Africa, the world’s second biggest wilderness. Then she grew curious about the largest wilderness of all, Antarctica. In 2004, she joined a guided trip to ski from the coast of Antarctica to the South Pole on the Hercules route, a distance of 690 miles. Despite McKeand’s lack of experience, she completely blossomed, feeling comfortable in the hostile environment.

Two years later McKeand returned to the Antarctic, making the same journey solo and unsupported. The trek involved pulling a sledge weighing 80 kg across the snow in temperatures as low as minus 35˚C. She used up to 8000 calories a day. McKeand did the trek in a time of 39 days, 9 hours and 33 minutes, breaking the world record (for both genders) by more than two days. The previous record had also been set by a British woman, Flora Thornewill. McKeand has conjectured, “There’s a tradition of suffering with men. They want it to be the most savage and hard experience. But the girls’ thinking is: ‘Let’s make it as nice as possible.’” 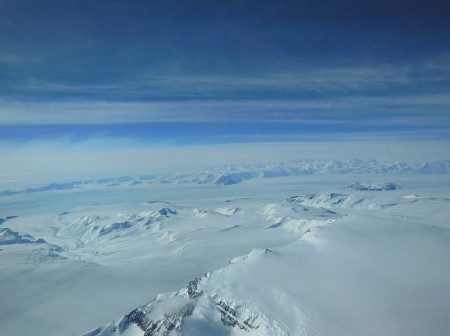 McKeand has since guided a number of individual clients to the South Pole, following the Messner route as well as the Hercules. In 2012, she was awarded a second Guinness World Record for having completed more expeditions to the South Pole than anyone else. These have involved over 6000 miles of Antarctic sled hauling.

McKeand’s most challenging situation came on a trip to the Arctic in 2008. She had hoped to become the first woman to travel solo from the north coast of Canada to the Geographic North Pole; (she attempted this unsupported and by the hardest route). However, after a fortnight’s skiing she fell through a deep crack in the ice. She was trapped in the eight foot hole, having dislocated her shoulder in the accident. After an hour’s struggling, she was able to escape, using her ski as a one-step ladder.

McKeand is the founder of Polar Expedition Training (PET). Based in Norway, at the heart of the Hardangervidda National Park, PET provides world-class training for would-be polar expeditioners, as well as skiing, dogsledding and snow-shoeing experiences. Her students have included Lewis Clarke, who went on to become the youngest person to ski from the coast of Antarctica to the South Pole and Mollie Hughes, the youngest female to ski solo and unsupported to the South Pole.

As well as her Antarctic adventures, McKeand has completed expeditions to South America including the Amazon, Egypt, Libya, Sudan, Namibia and Afghanistan. In 2010, she co-guided and mentored six youth ambassadors on a 200 km hike through the Amazon rain forest. Then, two years later, she co-guided five youth ambassadors on a two-week running expedition in Bolivia, completing eight marathons in eight days. She has also sailed round the world; in 2005 she took part in the Clipper Round the World Yacht Race. In 2007 she sailed the yacht Blizzard from Tasmania through the Southern Ocean to Southern Chile. McKeand has worked as a polar field guide, logistics consultant and motivational speaker. She is a fellow of the Royal Geographical Society, a member of the Explorers Club and a board member of the International Polar Guide Association. She is also an award-winning travel writer; in 2018 she won the AITO Travel Writer of the Year Award, (article under 1500 words). Her piece, “A world in a grain of sand” for Suitcase Magazine described her journey to the Western Desert and the Selima Sand Sheet.  More recently, she landed the position of South Pole Area Manager for the United States Antarctic Program, something she describes as ‘certainly the pinnacle of my career.’

McKeand says that the most challenging places she has encountered are remote areas of the oceans, far from any land. Her favourite parts of the world are the remote and empty ones, the big deserts and the polar wastes. Of the Antarctic, she comments ‘It is so completely unimaginable. I have skied to the South Pole more times than anyone ever and I still can’t really get my head around the place. Every day I ski all day across empty rolling plains of ice and every night invent a small home of canvas in the white nothingness …’

Cooper, T. (2008, Mar 8). The Daily Telegraph: A woman's place is at the Pole Hannah McKeand is piling on the pounds in more ways than one for a solo bid to reach the top of the world, as Tarquin Cooper reports. Daily Telegraph, The (London, England). Retrieved from https://infoweb.newsbank.com/resources/doc/nb/news/11F5883E131B3088?p=UKN