I.T. was the son of a law clerk, Thomas Davies. He was born in Carmarthen and attended Queen Elizabeth Grammar School, Carmarthen, and then St David’s College School, Lampeter.He matriculated to the college itself on October13 1911.

He was a fine all-round sportsman, good at cricket, athletics, swimming, shooting and rowing, as well as rugby. He started playing rugby while still at school in Carmarthen; his best position was wing three quarters. At Lampeter, he played for the Carmarthen Harlequins, Llanelli and London Welsh, as well as turning out regularly for the College XV. At Lampeter, loyal to the college, he played a season out of position at half-back. Some pundits have conjectured that but for this, he might have played for Wales earlier than he did. 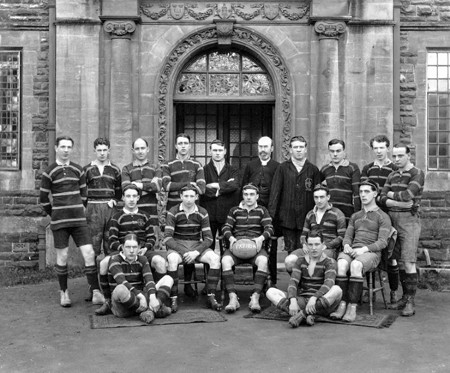 Davies was selected as reserve wing for Wales against England in January 1914. Then, on February 7 1914, he played for Wales against Scotland at Cardiff Arms Park. He was the youngest member of the Welsh team. He scored a try in a Welsh victory of 24 points to 5. The Guardian commented ‘Although spoiling one or two chances through knocking on, Ivor Davies proved a distinct success.’ At this time, the fearsome Welsh pack, led by the formidable Rev Alban Davies, was known as the ‘Terrible Eight.’ David Bain, the Scottish captain, later commented that ‘The dirtier team won.’ I.T. Davies then played in Wales’ 31-0 win over France, (at St Helen’s Ground, Swansea).

The Cambrian News reported of Ivor T. Davies’ reception in Lampeter that, ‘A large number of admirers went to Cardiff to see him play, and he was lustily cheered throughout the game. On his return, on Monday, he was met at the Station by a crowd of students and carried shoulder high to the College, to the strains of “He is a jolly good fellow” and other popular songs.’

On 2 March 1914, Davies played in Wales’ easy 31-0 win over France at St Helen’s Ground, Swansea.  His next match was against Ireland at the Balmoral Ground, Belfast, on March 14 1914. The game is remembered as the most brutal and dirty rugby match ever. The night before some of the Irish pack went to the Welsh team hotel to taunt the Terrible Eight. Threats and promises were violently carried out on the field the next day. Furthermore, the ground was muddy to the extent of almost being under water in places. Heavy rain meant that handling the ball safely became almost impossible. Mr Tulloch, the Scottish referee, is said to have taken little notice of all the fighting. Wales won the match 11 points to 3, with Davies scoring a try.

Davies had indeed become a St David’s College hero; a complimentary dinner was held in his honour on March 18 1914. The college magazine noted, ‘His college is proud of him; his comrades almost worship him, and through it all he remains the modest ‘I.T.’, whom we rejoice to honour, and with whom we deem it a privilege to associate.’

However, the First World War meant that Davies was not to play international rugby again. He played for Wales against the Barbarians at Cardiff Arms Park on April 17 1915. The aim of the match was to raise recruits for the recently formed Welsh Guards. Nearly 200 men joined up that weekend and the proceeds of the match (£245) were given to various war funds.  Although the Welsh fielded thirteen internationals, they were no match for the Barbarians. The final score was 26-10 to the Baa-Baas, (four goals and two tries versus one dropped goal and two tries). Davies scored one of the Welsh tries.

During the First World War, Davies fought in the 2nd Dragoon Guards and then the Machine Gun Corps. Afterwards, he seems to have worked as a civil servant. He died in Hampstead on July 2 1959.