David ‘Bailey’ Davies (1884-1968) was a Welsh rugby international, who went on to be awarded a military cross in the First World War.

Davies was the second son of a local farmer, Thomas Davies of Beilicoch Farm, Llanwenog. David was known as ‘Bailey’ or ‘Dai Beili’, after the name of his home. He attended the Ram School, Cwmann, and then St David’s College School. He learned to play rugby at the college school and became an excellent full-back. He studied mathematics at St David’s College from 1902 to 1905, becoming Bates Prizeman and Senior Scholar. He graduated with second-class honours. He played in the college XV as full-back and centre, as well as starting to play for Llanelli. At 5 foot 11 tall, he was above average height for that time. 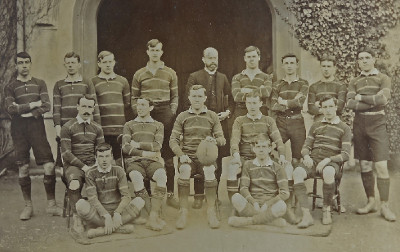 On leaving Lampeter, Davies won a scholarship to Jesus College, Oxford. There he won his Blue against Cambridge in 1905, 1906 and 1907. During this time, he continued to play for Llanelli as well as for London Welsh. He was capped once for Wales, replacing the injured Bert Winfield for the match against England at St Helen’s Ground, Swansea, on January 12 1907.  Wales utterly outplayed England, winning by two goals and four tries to nothing. The Observer commented ‘Wales played superb football from beginning to end, and never allowed its opponents to find their game … Davies had not much tackling to do, but his kicking was of a wonderful length, and nothing could have been better than the way he nursed the Welsh forwards’ energy.’ However, The Sunday Times wrote ‘All the new caps played up to international form, with perhaps one exception, Bailey Davies, and he did not let his team down, although doing nothing brilliant.’

After graduating from Oxford University in 1908, Davies spent a year as assistant master back at Llandovery College. His next post was at Merchant Taylors’ School in Charterhouse Square in central London; he taught mathematics, was in charge of rugby and led the Officer Training Corps. In addition, he was gazetted as 2nd Lieutenant in the Territorial Force in 1911. He also became adjutant of the London Public Schools Camp. He married Elsie Mary Pullinger in 1914; they had four daughters.

Although Davies volunteered for active service in 1914, he was kept at home to train officers for the new armies. However, he was eventually gazetted to the 13th London Regiment and then transferred to the Welsh Guards. He was awarded the Military Cross for leading a trench raid on June 1 1918, which led to the capture of twenty-seven Germans and two machine guns. After the war, Davies returned to Merchant Taylors’ where he became Housemaster. (The school moved to its present site at Sandy Lodge, Northwood in 1933.) Davies ran the School Home Guard during the Second World War.

Davies was ordained in 1926. He finally left Merchant Taylors’ School in 1946, becoming Rector of Sutton and Vicar at Eyeworth in Bedfordshire. After his retirement in 1957, he settled in Hendon. He died on August 24 1968. There is a memorial tablet to him and to his wife Elsie in the church at Sutton.

Walters, W. (2016). The fighting parsons: the role of St David’s College, Lampeter, in the early development of rugby football in Wales. Canolfan Peniarth