John Griffith Stephens (1893-1956) played international rugby for Wales, at the same time as working as a curate in Llanelli.

Stephens came from Llanbadarn Fawr, on the outskirts of Aberystwyth. His father, also John Griffith Stephens, was a farmer. He attended Llangynfelyn Primary School, Aberystwyth County School and then Lampeter College School. He matriculated into St David’s College, Lampeter, on October 13 1911, the same day as I.T. Davies, another future rugby international.

He played rugby for his schools in Lampeter and Aberystwyth, and then at St David’s College. He was a big man, and therefore a fairly obvious forward. He graduated with a BA degree in June 1914. When the First World War broke out less than two months later, Stephens volunteered for the Royal Flying Corps. He served there until the end of the war. 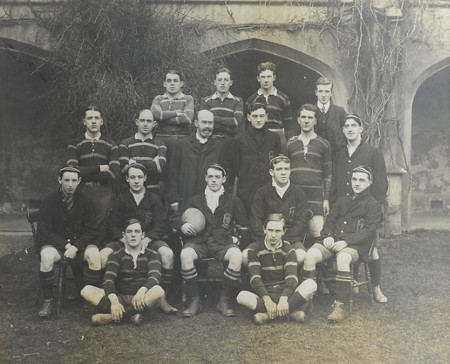 On his safe return home, Edwards was ordained deacon in 1919 and priest in 1920. He became a curate in Llanelli, where he worked until 1922. At the same time, he took up rugby again, playing for Llanelli. He also competed for Wales in all the four matches of the 1921-22 season. His first match was against England on 21 January 1922 at Cardiff Arms Park. The pitch was said to have been a quagmire. Wales won 28 points to 6, (two goals and six tries to two tries); England had been routed. Writing for the Daily Telegraph, Colonel Philip Trevor commented, ‘ … the game was one long, unbroken series of victories for the Welsh forwards.’ This was the first time both sides in an international match wore numbers.

Wales’ next fixture was against Scotland at Inverleith, Edinburgh, on February 4 1922. A desperately close match ended in a 9 all draw, as Wales dropped a goal in the last minute. The Scottish team included Eric Liddell, later to win the 400 metres at the 1924 Paris Olympics (inspiring the film Chariots of Fire). Then, on February 4 1922, Wales won a poor match against Ireland 11-5. Philip Trevor commented that he did not remember an international match, played in good conditions, in which the standard of play was so moderate. However, he did admit that Stephens was one of the four or five who had played well. In the last match of the 1921-22 season, Wales defeated France 11-3 at Stade Colombes, Paris on March 23 1922. René Crabos, the French captain, commented, ‘We were beaten by better players all round.’ The match report in the Daily Telegraph described the Welsh forwards as mostly responsible for the victory. Wales had won the Five Nations Championship, having finished the season undefeated.

Later that year Stephens went back into the Royal Air Force as a chaplain. Although he played several matches for the R.A.F. as a full-back, he did not represent Wales again. Then in 1928, he left the forces again having completed his service. He worked as a curate in New Brighton on the Wirral peninsula for a year, and then as a vicar at St John’s, Darlington until 1954.  In 1931, he married Ruby Bray, a well-known Yorkshire tennis player.

Stephen’s last post was as vicar of a village church, Bossall with Buttercrambe near York. He died there on 14 May 1956.