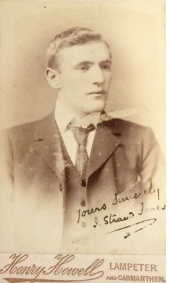 John (Jack) Strand-Jones (1877-1958) was a Welsh rugby union international and an army chaplain in what is now Pakistan.

He was born in Caio, Carmarthenshire, around ten miles south-east of Lampeter; his father Evan, a farmer, died when he was only one year old. Strand-Jones’ mother Margaret moved into Lampeter, where she kept a lodging house in Bridge Street.

Strand-Jones studied at St David’s College School, before matriculating to St David’s college itself. He graduated with a second-class honours degree in 1899. He went on to Jesus College, Oxford, before finishing theological training at St Michael’s College, Aberdare.

He was an outstanding sportsman. At the St David’s College Sports of 1899, he won the 440 yards handicap and hurdles races, plus the throwing the weight and throwing the cricket ball competitions. At rugby he had been good enough to play occasionally for the college and Lampeter town teams while still a schoolboy. He captained the St David’s College XV in the 1898-9 season, as well as playing occasionally for Llanelli. 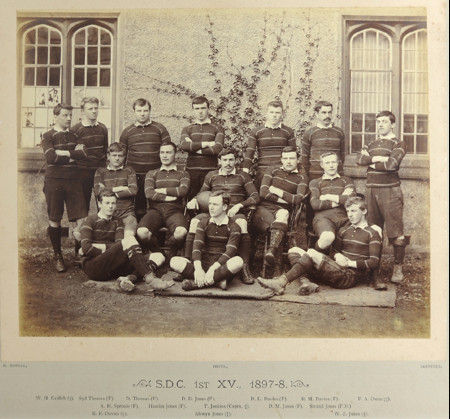 The St David’s College first XV for the 1897-98 season. Strand-Jones is seated on the extreme right.

At Oxford, Strand-Jones was a ‘blue’ three times, (in 1899, 1900 and 1901). His original position was at centre; however, at Oxford he was converted to a full-back. He also played occasionally for London Welsh as well as for Llanelli.  In 1902, he made his debut for Wales, replacing the great Billy Bancroft. His first match was against England in the Home Nations Championship. He scored a penalty, as well as creating a try. R.T. Gabe, the Welsh centre, remembered,

‘Jones played a marvellous game that day. How he got through the game without injury was akin to a miracle. He did not fall on the ball but picked it up and charged through the oncoming forwards with head down. From one of these fearless dashes he ran half the length of the field before passing to me with only Gamlin [the English fullback] to beat.’

The final score was England 8 Wales 9. Strand-Jones also played in Wales’ victories over Scotland and Ireland, (and scored against Scotland by converting a try). Wales had won the championship and the Triple Crown. The next year, he played against England (again scoring a conversion) and Scotland. However, he had a mixed game against Scotland; in the second half, he is said to have positioned himself badly and to have kicked badly. He was replaced in the team by H.B. Winfield, who, unlike Strand-Jones, had been playing regularly.

‘He also was unorthodox – he often ran when the ordinary full-back would have punted to touch. To escape opponents who were following up, he ran with a curious sideways movement, breaking with a series of short swerves towards the open side of the field, travelling a dozen or twenty yards to the right without travelling forward more than two or three yards. It was risky, but he was fast … Unfailing in courage, he would go down to the ball in front of the fiercest rush … ‘

Strand-Jones represented Wales at two sports; in March 1903, he also gained a Welsh hockey cap against England. He played cricket for Flintshire in 1906 and later for Carmarthenshire

He was ordained deacon in 1903 and then priest in 1904. He was a curate at Mold, Flintshire, from 1903 to 1908, and then at Corwen, Denbighshire. He joined Liverpool Rugby Club and continued to play occasionally for London Welsh. In 1909 he married Winifred Farrant. That same year he joined the Army as a chaplain. He was posted to the Ecclesiastical Establishment of Bengal, in the See of Calcutta. He served first in Karachi and then In Lahore. During the First World War, he became senior chaplain to the Waziristan Field Force on the North-West Frontier. At the end of the war, he spent two years on furlough back in Britain. He returned to India in 1922 as chaplain of Lahore, then Multan and finally Dalhousie. He kept his enthusiasm for sport throughout and became well-known for organising inter-regimental competitions in rugby, hockey and soccer.

Strand-Jones left the army in 1929.  On his return home, he served as rector of Hanwood, just outside Shrewsbury, until 1934. He was also chaplain at Shrewsbury Prison from 1930 to 1934.

On his final retirement, Strand-Jones returned home to mid Wales; he and his family farmed Pyllaucrynion in Parcyrhos, just outside Lampeter. When the town rugby club reformed after the Second World War, Strand-Jones was its chairman from 1947-48. He died in Lampeter on April 3 1958. In 1960, his team-mate R.T. Gabe said of him ‘I shall ever cherish his memory, for he was always reliable on the field, and a gentleman with kindly feelings and high principles off the field.’