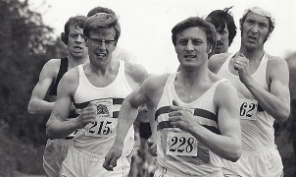 Shaun Lightman is a race walker, who represented Great Britain at the 1968 Mexico Olympics.

Lightman was born in Hounslow during the Second World War, indeed during an air raid. After the war finished, his parents regularly cycled the 60 miles from Hounslow to Littlehampton to camp overnight. He says ‘I was brought up expecting to spend hours on the road.’

Lightman remembers that he first stepped on an athletics track just after his tenth birthday. That summer, he won his first certificate for 2nd place in the 440 yards. He was educated at Hounslow College. His sports master was Bill Hamblin, who also produced the Olympic gold medal winning race walker, Don Thompson, as well as the sprinters Buster Watson and Ade Mafe. Outside school, Lightman joined Thames Valley Harriers and then the Metropolitan Walking Club. His first long race was the Garnet 10 miles on 3 February 1961; he finished 37th out of 108 finishers, in a time of 89 minutes, 1 second. He won the one mile national junior championship in 1961 and then the one mile national championship in 1963. Aged twenty, he set a world junior record of 6 minutes, 46.3 seconds for a mile walk.

Lightman studied History at St David’s College, Lampeter. As well as studying, he found time to be president of the Society of St David. The college’s focus on rugby union meant that keeping up his training in walking was not particularly easy. He graduated in 1966, becoming a teacher of religious instruction and physical education at Winton House Croydon. He also realized he had a chance to become an international athlete. He and his coach Tom Misson decided that his main event would be the 50k walk. Lightman comments, ‘I had not got quite the speed for 20k and people can come out of nowhere but at 50k, you know people are there for a long time.’ In 1967, he competed at the World Championships (Lugano Cup), coming ninth in the 50k.

In 1968 Lightman competed in the Mexico Olympic Games. This was the first Olympics to use a synthetic track and the first to be televised in colour. More importantly for the endurance athletes, it was also the first to be held at altitude. (As altitudes increase above 1600 m, maximal oxygen uptake decreases; this can adversely affect performance in long distance events). Lightman remembers breathing heavily while walking upstairs. Press articles even suggested competitors might die. For the 50k race, the altitude was about 7000 feet and the temperature 100 degrees Fahrenheit! It was said to be ‘wicked going!’ Probably not surprisingly, Lightman collapsed around 40k. However, he happened to see the world record holder, Gennadiy Agapov, getting into an ambulance, and thought, ‘I can pass him.’ When Lightman came into the stadium, he was convinced he was last! In reality, he had finished eighteenth out of thirty-six starters, with a time of 4 hours 52 minutes 20 seconds. He says of competing at the Olympics, ‘Outside the track really wonderful. I really enjoyed it. On the track we were not at all prepared ...’

In 1969, Lightman competed in the European Games 50 km in Athens. Again, the heat was brutal. He collapsed at 35 km; it was two hours before he came round. More happily, he competed in the 1970 Commonwealth Games in Edinburgh. He came seventh in the 20 miles race walk with a time of 2 hours 44 minutes. In 1973, he competed again at the World Championships, completing the 50k race in a personal best of 4 hours 15 minutes. This was to be his last appearance as a senior international, although he continued to make ‘B’ squads.

Lightman retired from international competition in 1979, but decided to continue as a coach and as a club walker. The walkers he has trained include Mark Easton, Chris Cheeseman and Sean Sullivan, as well as local juniors.

Professionally, Lightman taught at Royal Russell School, Croydon, from 1973 to 2006; he was instrumental there in introducing business studies, both for GCSE and A-level. He also founded Madden House for day boys, as well as becoming a team leader for the AQA examination board.

Even in his seventies, Lightman still has a coaching group and competes regularly, walking for Surrey Walking Club and for Blackheath & Bromley Harriers. He is seventh on the United Kingdom all-time list for the 20k walk for his age group.

Alongside walking, Lightman has been a reader at St Francis Church, Selsdon, since 1980. He says, ‘I found my faith gave me an extra edge with race walking as I was able to direct my thoughts over those long distances. I found the discipline needed for both athletics and religion was quite similar.’ He has been a chaplain at Southwark Cathedral and served as one of the twelve games chaplains at the 2012 London Olympics.  He has been married to Andreeq for over fifty years; they have two grown up children, Sarah and Joanne and, so far, one grandchild, Bryony. Lightman comments that without the support of his wife and daughters, none of his achievements would have been possible.