The University of Wales Trinity Saint David has created a Remembrance Garden at its Carmarthen campus ahead of Armistice Day, marking the end of the First World War on 11 November 1918. The Garden, which has been installed on the University’s grounds between its Teaching and Learning Building and Yr Egin on College Road includes the installation of 10 figures of lone soldiers, 6 crosses with wreaths and 50 steel poppies. Red light is projected across the grassed area and onto the buildings with soundtrack playing every half hour from 7pm to 10pm.  There is also a film to accompany the art installation by Richard Beecher.  Wreaths were also laid on the University's Lampeter and Swansea campuses.

“The University wished to mark this important day to pay tribute and remember all those who gave their lives and made so many sacrifices in conflicts since the First World War”, said Professor Medwin Hughes, DL, Vice-Chancellor of the University. “This has been a very difficult year for everyone, made so much more difficult and poignant at this time of year as we are unable to get together to honour those who made the ultimate sacrifice.  As a civic institution, we give thanks for the service and dedication of all who defended us in times of war and conflict. I am very grateful to the University staff who have created this magnificent and imaginative work.” 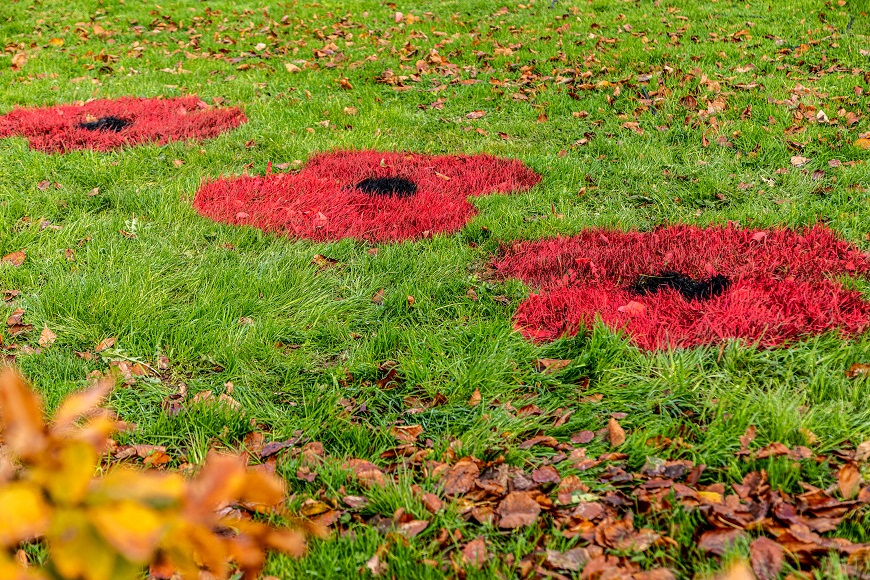