Pupils at schools in Swansea and South Wales are learning about textile design by making Christmas stockings using cloth kits created by students at the University of Wales Trinity Saint David (UWTSD). 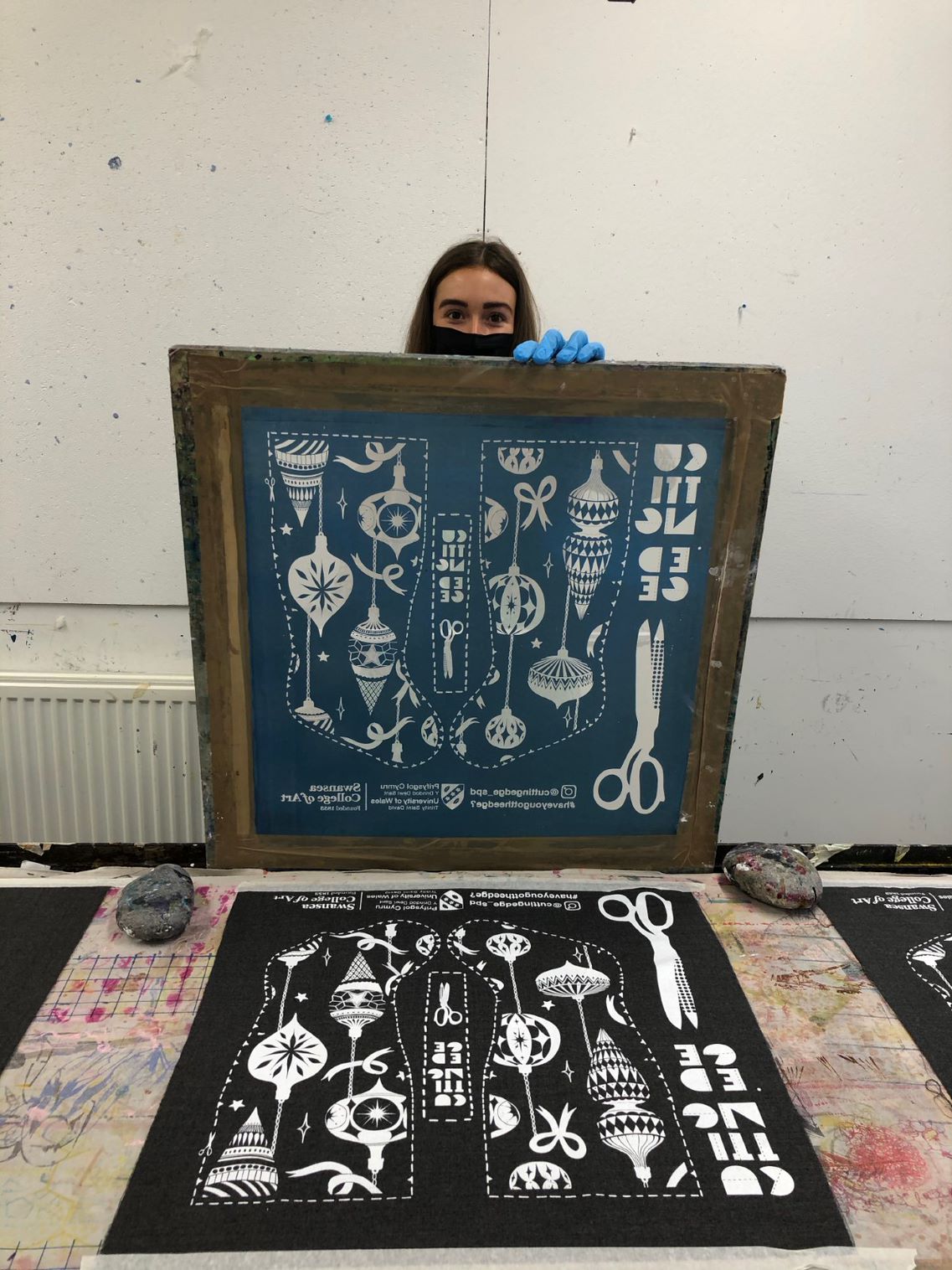 The project is part of UWTSD’s schools outreach work, which aims to raise the profile of Surface Pattern and Textiles, giving pupils a taste of what it would be like to study the subject.

It’s also hoped that post Covid-19, the Christmas stocking project will grow, and pupils will be able to make and sell batches of stockings to raise money for their schools, as well as giving away filled stockings for charity.

The cloth kits make it easy for the pupils to make their own Christmas stockings: all they have to do is cut out the pre-printed shapes and sew them together. The attractive designs on the stockings were created by fourth year students at the university and printed onto fabric donated by clothing company TOAST. The students also created a digital download giving instructions for how to make the stockings, and a film showing the whole process, giving pupils a glimpse inside their studio and insight into what the Surface Pattern and Textiles course involves.

“The purpose of the video was to show how the kits are being made and printed in the workshops, because usually this is the time of year when we would be inviting the pupils into the university for taster days,” said Georgia McKie, senior lecturer in Surface Pattern and Textiles, who co-ordinated the project. “This is an alternative gesture, and making the film was a lovely learning opportunity for our fourth-year students. I’m very impressed with their work on this project, which formed part of their Creative Enterprise and Practice module. They worked as team and played to their strengths: some are great digitally, some are great at understanding pattern cutting, while others excel at screen printing. None had prior experience in putting a video together, but they became competent at it.”

So far, the project has seen cloth kits go out to Gowerton School in Swansea, where a fourth year UWTSD student also ran an accompanying workshop for year 9 and 10 pupils, and to St Clare’s Senior School in Porthcawl, whose Head of Art, Louise Williams (a UWTSD Surface Pattern and Textiles graduate herself) praised the resources made by the students, which were used in a session titled ‘A morning in the life of a Surface Pattern Design student’.

“Our Art and Design students have had a fabulous morning and thoroughly enjoyed their textile taster session today, in conjunction with the incredible BA and MDes (Hons) Surface Pattern Design degree in Swansea,” she said.

“A morning in the life of a Surface Pattern Design student’ meant they had the opportunity to make the pre-printed, screen printed stockings from kits provided by the Surface Pattern Design department. They also loved the sustainable aspect of the stockings which were screen-printed onto waste fabric donated by TOAST. We have many students who go onto follow this degree course, one being Zara James, who is a past pupil of ours and now part of the team behind this initiative #haveyougottheedge?”

In addition to going to schools, kits have been sent to students at Cardiff and Vale College, and further afield to colleges in Bath and Southport. They have also been delivered to course applicants and people who would usually be attending open days at the university. In addition, instructions for making your own kit are available for anyone to download online.

Georgia is delighted by the students’ efforts and ingenuity and has enjoyed collaborating with former students like Louise who have become schoolteachers and were keen to get their classes involved. These alumni are part of a strong network of UWTSD Surface Pattern and Textiles graduates who remain in touch with the university and take part in activities to help to inspire undergraduates and potential new students.

“We see ourselves as a community – in the 20 years of the programme we have gathered people along the way, many of whom now come back to speak to our students about their careers,” says Georgia. “It’s part of the DNA of the programme, and going into schools and colleges is an important part of sharing that warmth.”