The University of Wales Trinity Saint David BA Filmmaking students have had the opportunity this semester to work with the independent production company ‘Broadside Films’. 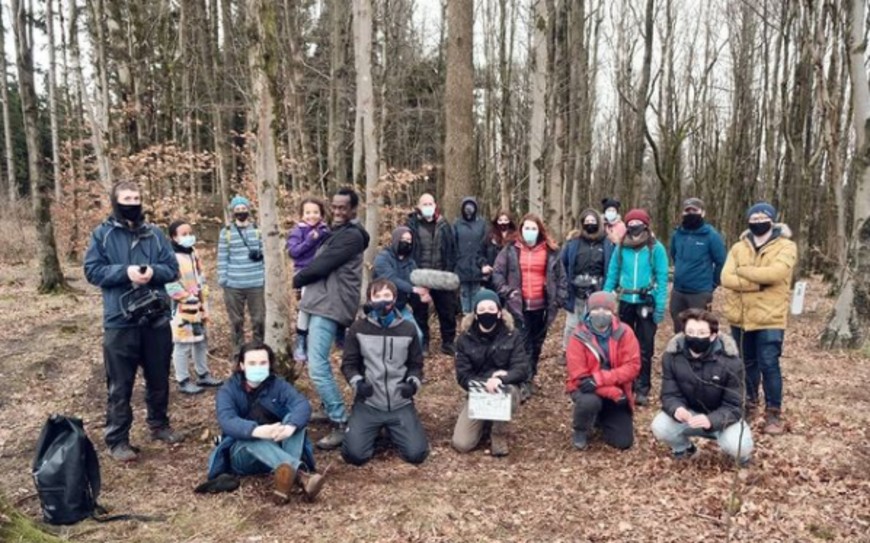 Each year has had the opportunity this semester to work with Broadside Films, a Carmarthenshire-based independent production company that produces short films, web series and features.

In May, first year Filmmaking students were challenged by Broadside to create a short film about UWTSD’s unique ‘Cynefin’ outdoor education centre located in Johnstown. Students also had the chance to take part in production workshops to learn more about the industry, whilst discovering more on filmmaking, storytelling and editing in the expertise of Broadside.

Second year students also had the opportunity to go on a placement, and to work on a feature film, and also a short film that’s currently being produced by Broadside Films. One of those short film titled ‘Jackdaw,’ is a short film in association with Ffilm Cymru Wales. It’s written and directed by Mac Nixon, and will be screened on the BBC later this year.

One student that took part in the placements, Katrina Seaton has now been asked back to return to do paid work on Broadside’s next production, which is a commercial shoot for a Whisky distillery on the Isle of Skye.

This is an exciting opportunity according to Katrina: “As a student getting real work experience on a professional set is hard to come by. I am very grateful of the opportunity I was given by Broadside to work alongside amazing creatives in a professional manner. The lessons I learned are just as substantial as any I learned in the classroom, such as how a set is run and how different departments work. I was able to form new friendships and professional relationships with people who can give advice on what steps I can take to achieve the career I want.”

Dan Bailey, Co-owner and producer of Broadside Films is also a 2016 graduate of the film and media provision on the Carmarthen campus. He’s a perfect example of how UWTSD’s Carmarthen based film and media courses connects students to the creative industries.

Dan’s happy that he’s been able to give back to the University by reflecting his working experience in the industry, and providing experience to current students. “The students were fantastic on set. They were very challenging shoots involving large crews, night shoots and multiple locations as well as the local police force. They were really knowledgeable and willing to be involved in all aspects of the production.”

This semester has been a fantastic opportunity for students to develop skills and to familiarise with the media industry. Dr Brett Aggersberg, Lecturer in the Film and Digital Media department said:

“The aim of our film and media programmes on the Carmarthen campus is to connect students with industry to help them when they graduate. They leave us with a degree and experience. Our links with Broadside Films started in 2016 when Dan Bailey graduated from our Film course. He was establishing Broadside as a commercial and community film business. He has since grown the company with his partners to develop short and feature films. He is now able to pass on his industry experience and connections by working directly with students in our department as a member of staff, and by facilitating placements of real world productions for students.”