A mother and daughter who have graduated from the BA Early Years Education course at the University of Wales Trinity Saint David, have had success at the Mudiad Ysgolion Meithrin annual award ceremony this year. 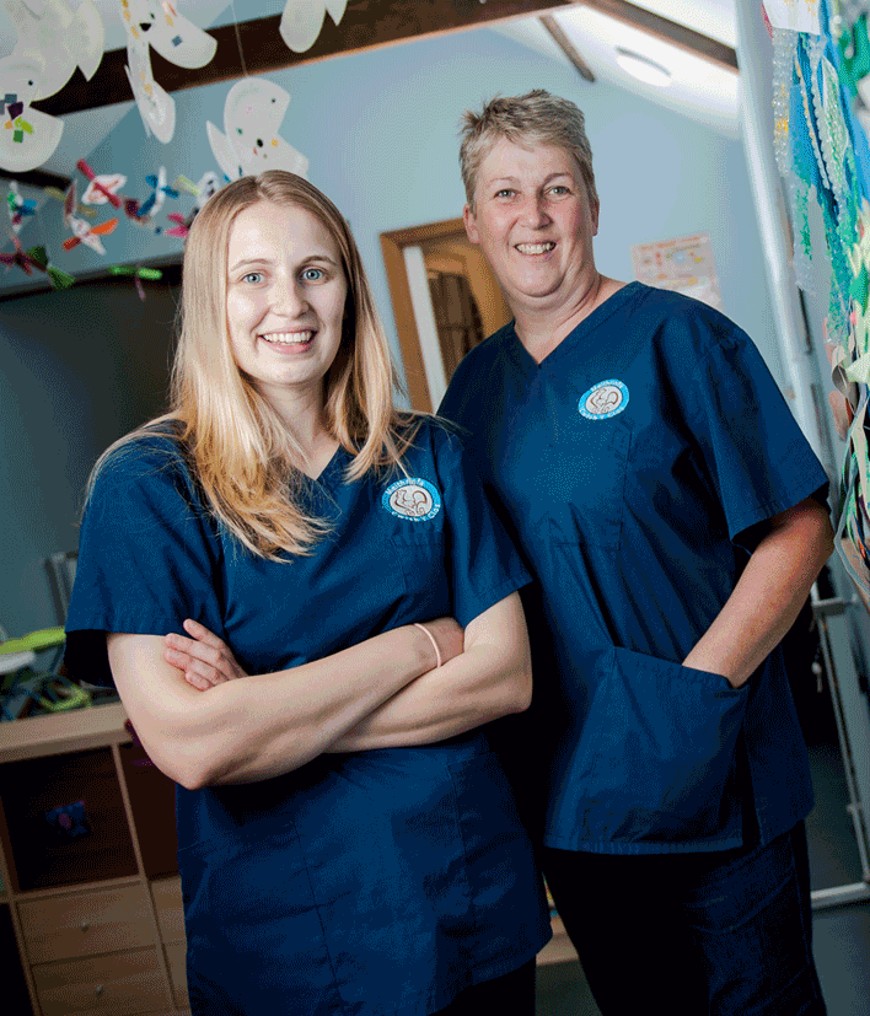 Ann Davies and Gwenllian Stephens, the owners of Cwtsh y Clos nursery in Llanarthne, came first in the Day Nursery of the Year category. The award ceremony was held in Theatr y Werin, Aberystwyth. The evening aimed to raise the profile of the early years sector in Wales through the medium of Welsh.

Ann says: “We were nominated for two different awards by the nursery’s parents and came in the top three for both, which were ‘Day Nursery of the Year’, and ‘Education in the Outdoors’.  That in itself was a huge privilege but winning the Day Nursery of the Year category was truly an honour for us.  It is our privilege to be allowed to look after, nurture and teach the children in our care.”

Cwtsh y Clos nursery opened back in 2014 to provide care for children from 6 months to 7 years old. In order to realise the family’s dream of being able to open a nursery on the farm’s courtyard, Ann and Gwenllian decided to come to UWTSD to study for the right qualifications.

Ann adds: “UWTSD is renowned for its education courses, and they have been innovative in designing the Yearly Years programmes of study. When Gwenllian and I went to the open day, it was obvious that this was the best place for Gwenllian because she wanted to study in Welsh, and then I joined the evening group.  My aim was to do a degree under a branch of the Open University, but following a conversation with Alison Rees Edwards, Glenda Tinney and Gwyneth Davies, it became obvious that I could join the evening group and this enabled me to study and work at the same time. I also studied in Welsh.”

When Ann and Gwenllian started the venture, their intention was to establish a nursery with a Welsh language ethos, that was mindful of the children’s needs and would make use of the outdoors. Gwenllian said,

“I also wanted to give the children experiences that were similar to those we’d had as a family. That is, being outside, planting flowers, fruit and vegetables, looking after the animals and promoting an understanding of and care for our environment. A number of the University’s modules promoted this ethos, and therefore turned our theory into good practice.” Both are very grateful to the University for the continuous support they received while studying, and as a way of giving back the nursery offers work experience to the University’s current students.

“We are very glad to have the students’ enthusiasm and new ideas among us.  It’s also great to be able to share experiences with them too.  Because we’ve both been through the degree, we understand the pressures that can sometimes occur as the time to hand in work gets closer. We always try to work around pressures like that for the welfare of the students in our care.  It’s also a wonderful opportunity for the students to experience working with children under 3 years old, as they will sometimes have school experience but not experience of the very early years, which is children under 3 years old.”

The Early Years department is extremely proud of what Gwenllian and Ann have achieved in such a short period of time. Dr Glenda Tinney, Senior Lecturer, says:

“We are so glad to see Cwtsh y Clos nursery winning such an important award. The Early Years team loves seeing former students like Ann and Gwenllian influence the early years sector, and it’s a pleasure to see so much positive feedback on their work supporting children and families. It is also inspiring to see a Welsh nursery that supports the Welsh speakers of the future.

“I had the pleasure of teaching Ann and Gwenllian and the privilege of working with Ann as a lecturer. I know that they were both very interested in the outdoor experiences and it’s wonderful to see that the children in Cwtsh y Clos benefit from a variety of outdoor experiences, as well as on the farm.

“By now, Cwtsh y Clos is also an important nursery for the Early Years course, and it offers placement experiences for our students to benefit from the good practices the Mudiad Meithrin Awards have acknowledged.”