Collaboration between the Wales Academy of Voice and Dramatic Arts and Ysgol Glantaf to provide experience for pupils whilst preparing for their performance of 'Crazy For You'.

The Wales Academy of Voice and Dramatic Arts at the University of Wales Trinity Saint David has been working with and creating workshops for year 9 pupils from Ysgol Glantaf, Cardiff whilst preparing for their end of year show 'Crazy For You’. 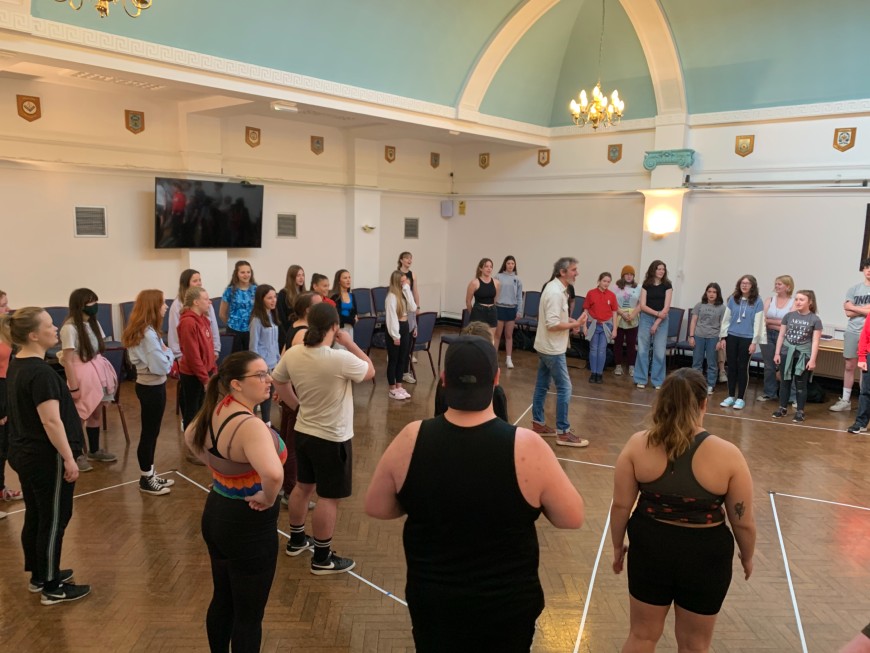 Welsh-medium BA Perfformio [Performance] and BA Musical Theatre students will perform the musical  'Crazy For You' directed by the versatile director James Williams. The show brings together some of Gershwin's most popular songs such as 'I Got Rhythm', 'Embraceable You' and 'Someone to Watch Over Me' in a hilarious tale of mistaken identities, heartbreak and romance.

The workshops are intended to connect with and reach out to schools in the community, and to co-learn and share skills with the pupils. The workshops are also an opportunity for the pupils to get a taste of the world of musicals, and see how the students go about their rehearsal sessions on a day-to-day basis, as well as consider what kind of careers the course offers.

"I received a warm welcome from Ysgol Glantaf and an opportunity for a short while to share acting exercises with a crew of about 40 inquisitive drama pupils.  Through theatre games by global makers, we were able to discuss the importance of a free Body, Focus, Co-operation, Attention, Enterprise and one hunderd per cent Commitment - which is the actor's daily job!

“We had an interesting and important discussion about confidence and what can prevent us from jumping in no matter what we are facing without fear of making a fool of ourselves. By the end of the session the confidence, and therefore the acting had developed a great deal.”

“We all know that engaging young people in theatre is vital for the future of our industry, and so I was delighted that we were able to host a visit by year 9 pupils to a rehearsal for ‘Crazy For You’, the Gershwin musical.  Together we had a look at the context of the show and what acting styles are useful when making a musical.  We then shared a run of the first half of the show followed by a short Q & A.

“ The pupils’ thoughtful responses to the work were helpful, and having them in our rehearsal was useful to the cast in that they were able to experiment with breaking the ‘fourth wall’ and practise playing with audience on three sides.  It was a joy to see students and pupils throw themselves into the work together and I’m looking forward to sharing the finished show with them all next week.” 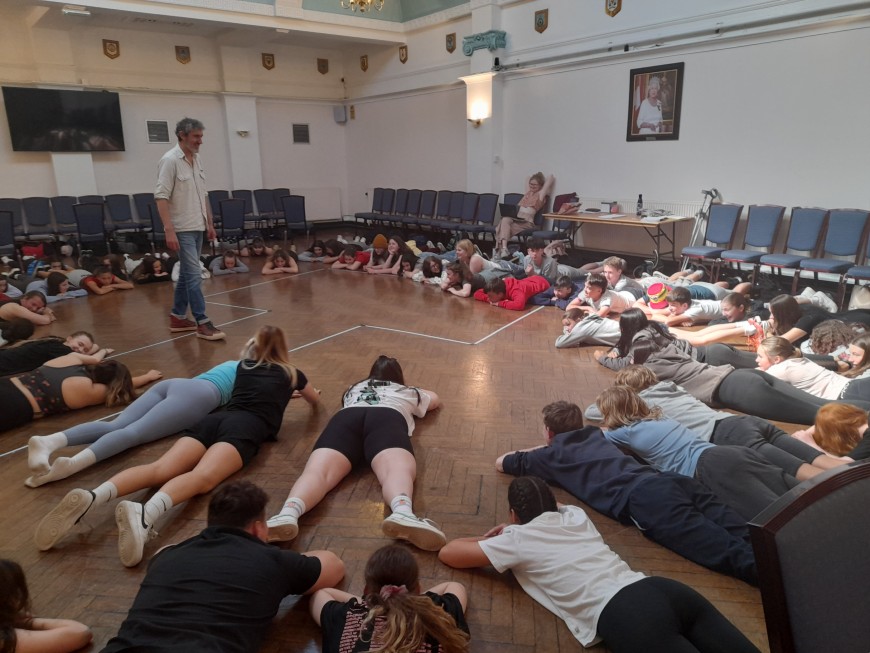 Pupils will also have the opportunity to come and see one of the show's performances to have experience of understanding creative development from rehearsal to completion. Elen Bowman added,

“I believe that the role of drama in our schools is so important and can encourage the individual's development in so many key ways. I look forward to creating more partnership between the University and Glantaf soon.”

“We had fantastic dramatic experiences last week as a Drama class, not only seeing inside the Masons Hall building (different!) but mainly, having the opportunity to join in rehearsal with the students performing 'Crazy For You' in a week's time. An opportunity to limber up and develop warm-up and breathing skills – great fun!

"As we watched them rehearse the first act, it was nice to see them enjoying (like us) as they danced and sang – I'd love to be part of a similar cast especially watching their energy and commitment as a Chorus.

“Thank you Elen Bowman for the workshop at the school and thank you to the students for the experience of watching their performance – we look forward to seeing the finished performance in a week's time."

Performances of 'Crazy For You' will take place on June 30th and July 1st at the Gate Arts Centre in Cardiff. For tickets, please book here 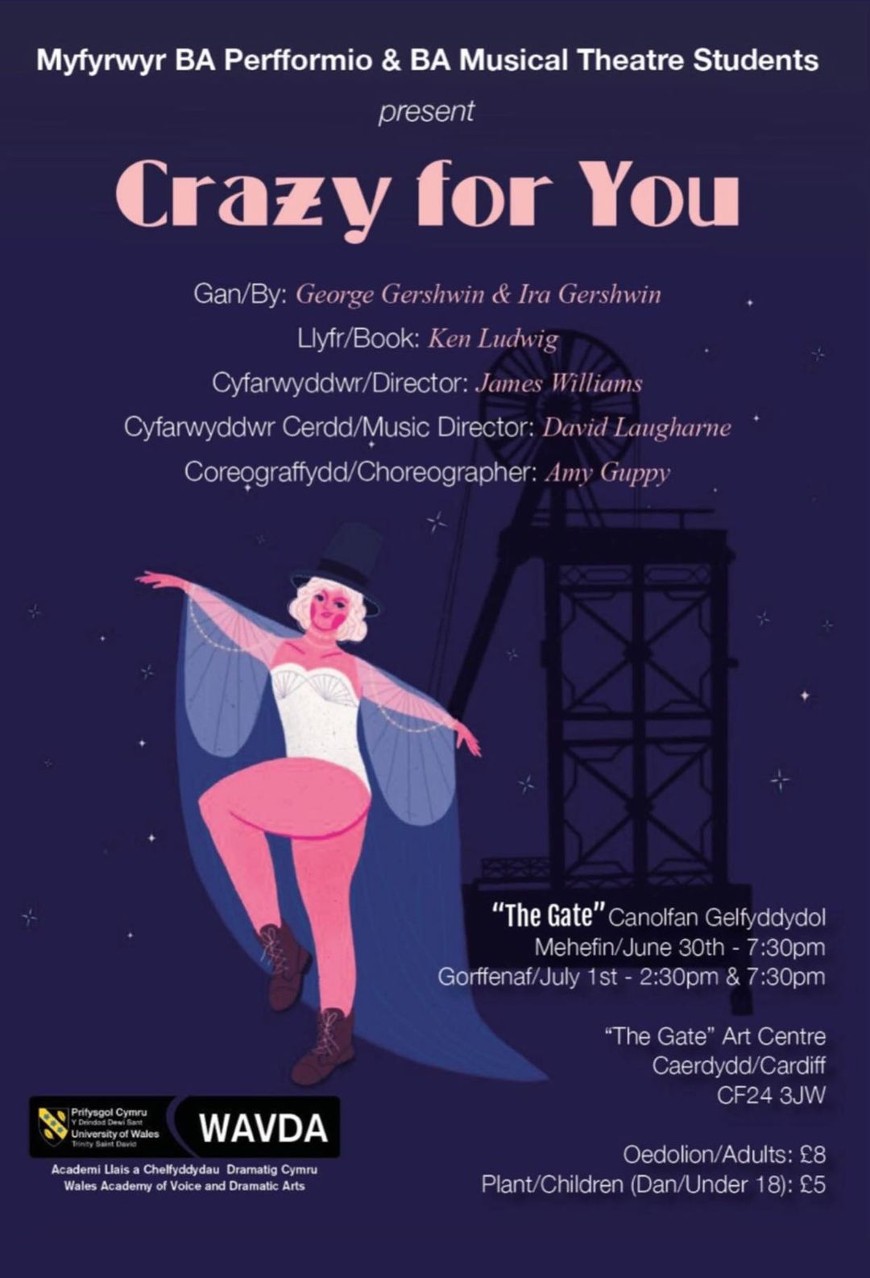