Each year in New Zealand’s capital of Wellington, the spheres of fashion and art collide. An epic show descends on the capital for three weeks, stopping the city in its tracks and bringing in crowds of up to 60,000 people per year. It was here that Agnes Olah, a student at University of Wales Trinity Saint David (UWTSD) found herself when her design scooped up a prestigious global award.

The World of Wearable Art (WoW) is an annual fashion design competition, open to all people from all nations, with very minimal rules: the outfit created must be wearable, and must respond to one of the six chosen themes for the show. Outside of this, anything goes. Such simplicity allows for a broad range of interpretations and submissions, with winning designs incorporated into a catwalk-cum-theatrical show that runs for 3 weeks in the capital city, providing a feast for the eyes for thousands of attendees.

Agnes (Agi) scooped the ‘Student Innovation Award’ with her winning design, entitled ‘Beneath’, which was worn on stage as part of the show. Basing her work on the contrasting concepts of vintage lingerie and armour, she aimed to convey how often, people are perceived in a certain way, but that looks can be deceiving. She invited people to question the notion of perception.

The piece deliberately utilises light pink to indicate femininity and is made from recycled material and unused stock from the fashion industry such as hook and eye joiners, suspender clips and elastic destined for landfill, to give it a sustainable twist. Agi currently studies BA (Hons) Graphic Design at UWTSD’s Swansea College of Art and has a previous degree in Fashion, so she combined her skills from both fields to create a strong competition submission.

Agi was able to collect her Student Innovation Award and attend the opening night of the show in person because of funding she received from UWTSD via the Taith scheme, which helps students with costs involved in working, studying or volunteering abroad. The funding helped get Agi to New Zealand where she spent 8 nights and had the chance to network with some of the world’s best fashion designers, the likes of whom have created outfits for Madonna, Lady Gaga and Beyonce to name a few.

New Zealand’s Prime Minister Jacinda Ardern made a surprise modelling appearance wearing one of the outfits in the Aotearoa category, and Agi described being there to witness this and be part of the show that night as ‘completely exhilarating’, describing the full stadium crowd as alive with ‘frenzied excitement’. 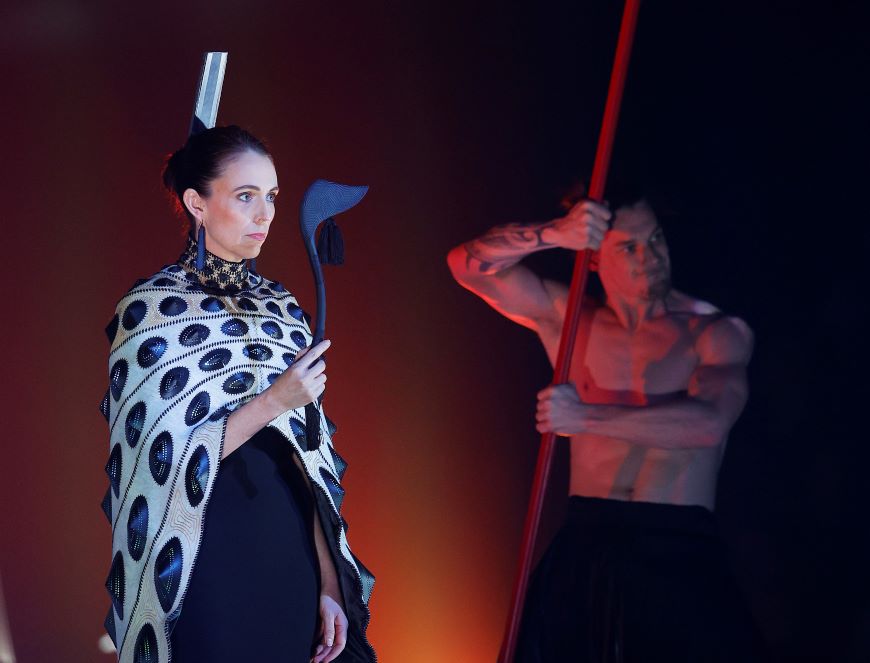 Out of tens of thousands of entries, Agi was in the top 2%, whose designs were incorporated into the show. When asked about how her studies had helped shape her work, she said: “After Covid-19 I needed to feel creative again, so I decided to study an additional BA in graphic design at UWTSD. The course encourages transferable, meaningful design processes which have really influenced my work in the creative industry.

“I am delighted that the University was able to support my attendance at the World of Wearable Art, which was an amazing experience that created opportunities to meet other inspiring designers.”

Donna Williams, Programme Manager for Graphic Design at UWTSD says: “Agi has embraced every opportunity that Swansea College of Art can offer. She always approaches all her projects with a depth of knowledge and aims for meaningful outcomes, and it’s an absolute pleasure to have her on our programme.

“Combining fashion and graphic design skills, she’s created an innovative and desirable piece of wearable art which is a perfect example of transferable skills. We are absolutely thrilled that the University was able to support her participation in New Zealand and offer Agi this incredible opportunity.”

Kath Griffiths, International Regional Manager for Wales Global Academy at UWTSD who helped coordinate the Taith funding awarded to Agnes, says: “Agi was the first student to have been supported by the Taith scheme at UWTSD. We were delighted to offer her the opportunity to collect her prestigious award in person, and are proud of her success. One of the Taith programme’s aims is to showcase Wales to the world; Agi is a fantastic ambassador for UWTSD, for Taith and for Wales.”

Founded in 1853, Swansea College of Art at University of Wales Trinity Saint David is a leading provider of Arts-related courses, ranked 1st in Wales in four Arts subjects and in the top 10 UK Universities for Graphic Design.