Special Concert in Lampeter to celebrate the Bicentenary.

The University of Wales Trinity Saint David looks forward to continuing celebrating its bicentenary by holding a grand concert in the company of students, alumni, and friends of the University. 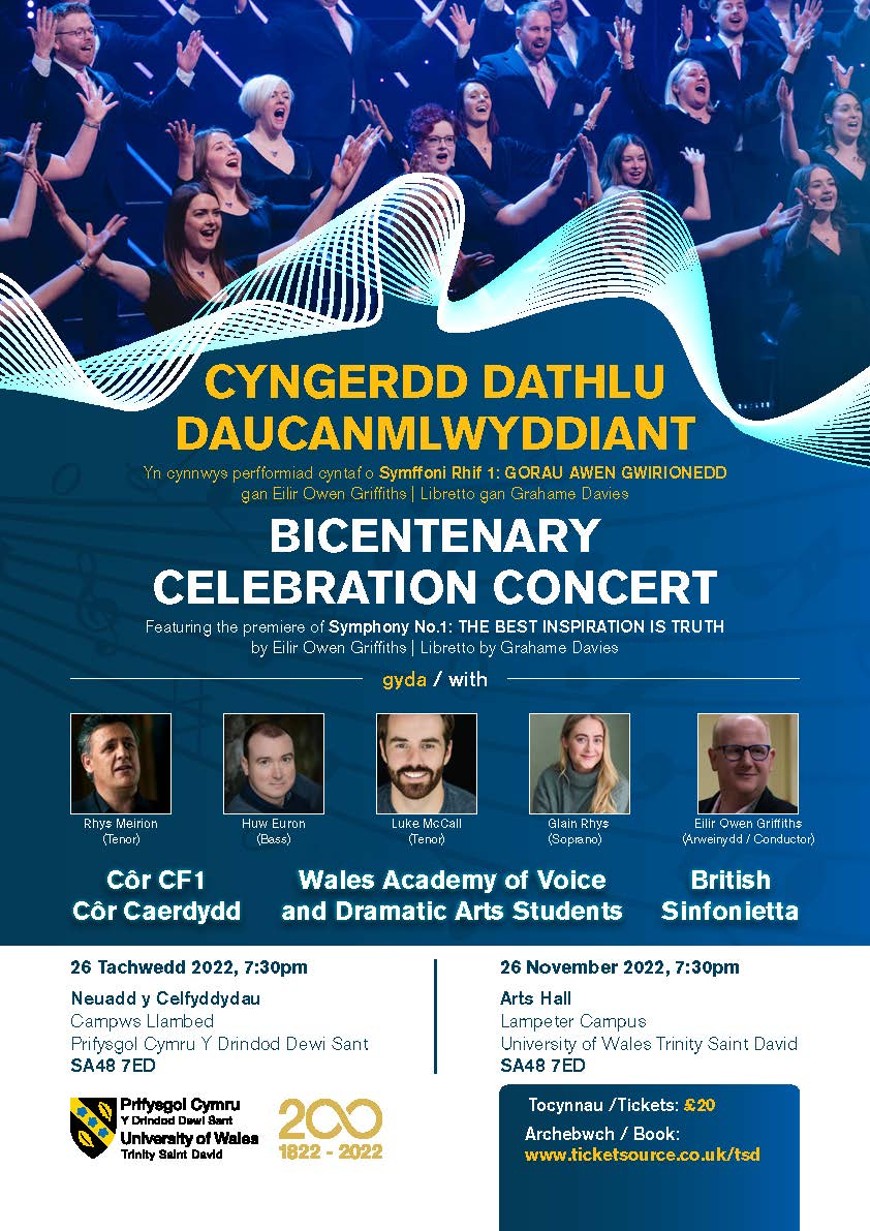 This concert, which will be held at the Arts Hall of Lampeter Campus on Saturday November 26th, will comprise the first performance of Symphony No. 1 ‘Gorau Awen Gwirionedd’ (The Best Inspiration is Truth), composed by Eilir Owen Griffiths, with the libretto by Dr Grahame Davies.

Several of the University’s alumni will perform in the concert, including the tenor Rhys Meirion, the actor and singer Huw Euron, and stars of ‘Welsh of the West End,’ Luke McCall and Glain Rhys.

Also, some of the University’s current students from the Wales Academy of Voice and Dramatic Arts will perform, as well as Côr CF1, which Eilir conducts and which celebrates its twentieth anniversary this year; and Côr Caerdydd which also this year has reached a milestone and celebrates its thirtieth anniversary, accompanied by the British Sinfonietta.

“It is a great privilege to receive such a special commission from the University to compose a symphony as part of the bicentennial celebrations. The commission to celebrate this important milestone means a lot to me not only as a member of the university staff, but also as an alumnus who graduated from the Theatre, Music, and Media course exactly twenty years ago. I am sure that I would not have been able to compose this type of work had it not been for the opportunities given to me during my time here as a student.

“Working with Dr Grahame Davies has been an incredible experience, and without a doubt, it was his gift with words that provided the best catalyst to compose the music for this symphony.”

The symphony ‘Gorau Awen Gwirionedd’ is divided into four movements. Each movement refers to different aspects of the University and portrays its history over the last two centuries. The work commences with a fanfare that resembles a procession on graduation day, and Saint David’s words “Byddwch Lawen” (Rejoice!) are used as codas by the choir.

The 50-minute-long symphony comprises four soloists, a violinist, a choir of one hundred voices and a full orchestra.

The first movement represents the University’s early period at Lampeter and Carmarthen and has a devotional feel to it, including Gweddi i Dewi (A prayer to St David) and a setting of “O Lux Beata Trinitas/Oleuni’r Drindod ddiwahan / Oh Light of the Blessed Trinity”.

In the second movement we find references to Sorcery and the Magician Merlin, and can be heard the familiar words ‘Gorau Awen Gwirionedd’, motto of the University of Wales. This movement is full of magical sounds interwoven with the magician’s mischief.

At the centre of the work is the “Intermezzo: Canghenau’r Dderwen Fawr” (The branches of the Great Oak), a piece for strings. This musical bridge represents the growth of the great oak’s branches and the welcoming of Swansea to the University’s story, and indeed, making contact with the rest of the world.

The third movement is a remarkably exciting Sea Shanty. The jolly music of peasants is heard with the violinist and baritone both leading it together.

The fourth movement represents the present and future with the music focussing on themes such as the environment, science, and the future. This movement contains more modern music and provides an opportunity to include idioms of Musical Theatre that are so relevant to the University’s present courses.

The libretto has been composed in three languages, Welsh, English and Latin, again, a way of representing the Trinity.